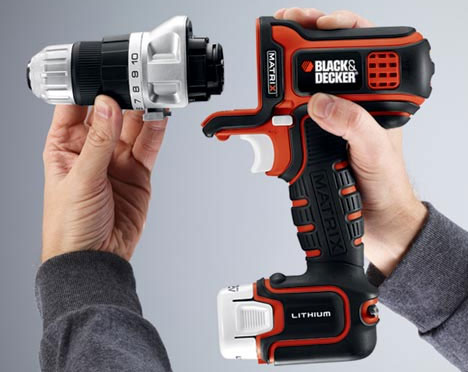 I'd be a lot more excited if it was Makita or Bosch announcing this, but Black & Decker has announced they'll soon launch a line of modular power tools. Their Matrix tool system consists of main unit containing a handle, motor and battery, to which the user connects one of seven accessories: drill, impact driver, oscillating multi-tool, jigsaw, sander, router and circular saw. (Before you get too excited, these appear to be smaller versions of the real deal—the router's for 1/4” shank bits and the circ saw runs a tiny 3-3/8” blade.) 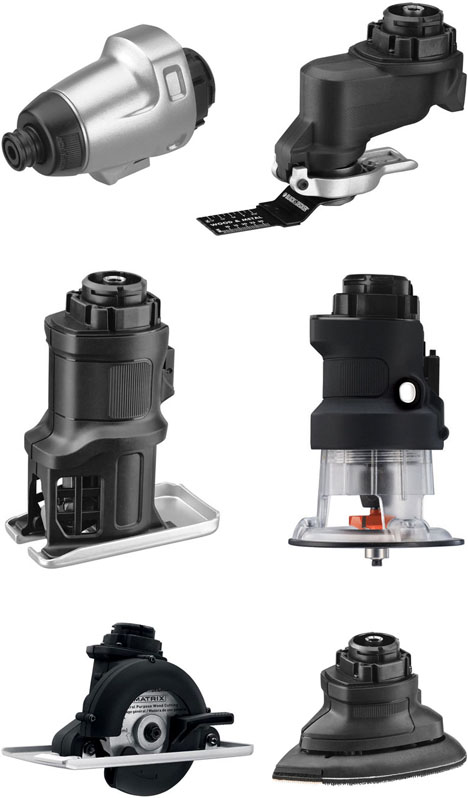 For the non-power-tool initiated, my opening comment refers to Black & Decker's quality and target market. When it comes to power tools, Festool and Hilti are the cream of the crop, and they're what you'd find in a high-end contractor's truck. Below that you've got Makita, Hitachi and Bosch, who make decent stuff that us mere mortals can actually afford. Black & Decker's stuff is more aimed at, say, a new homeowner who's never owned power tools but figures he oughta pick some up for light repair work around the house. If you hired a professional carpenter and he showed up with a Black & Decker drill, it would be like, to paraphrase Adam Carolla, hiring an exterminator and he shows up with a flip flop.

Nevertheless, the modular concept is interesting, and I'll be looking out for reviews from the major tool sites once the Matrix is launched. I'm most curious about how the ergonomics will work out, given that different tools require different types of grips at different angles. Ridgid has a similar line of modular power tools they released a couple of years ago, but to be honest I'm skeptical of some of the glowing reviews I've read due to that particular company's parentage.

The Matrix system will hit store shelves in October.