A Different Kind of Concept Bike 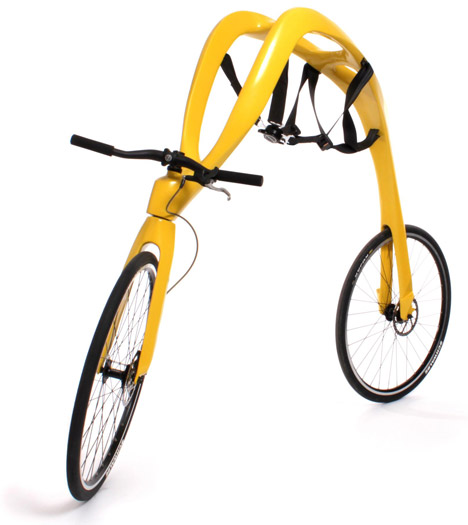 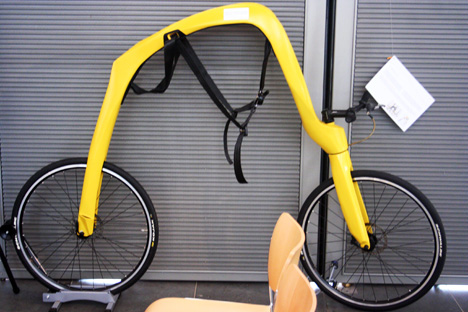 Back in March, we caught a tantalizing glimpse of "FLIZ," an unconventional (to say the least) concept bicycle that was on view at the first annual Munich Creative Business Week. With nary a project page (their current site remains scant on details) to follow up with the design team, we were pleasantly surprised to see that they published the project earlier this month, as an entry for the James Dyson Award: FLIZ comes from the German "flitzen" and means speeding... with your feet... Based on the very first bike—the "Laufrad"—it is a velocipede concept of healthy, ecological mobility in overcrowded urban space. Its laminated, innovative frame with 5 point belt system does not only mark the outstanding appearance, but first of all it provides a comfortable, ergonomic ride between running and biking. The frame integrates the rider and due to its construction it works like a suspension whereas the belt replaces the saddle and adjusts your position. These aspects reduce pressure in the crotch and distribute the body weight while running, which is a unique feature. On the bottom of the rear stays special treads are located to place and relax the feet. 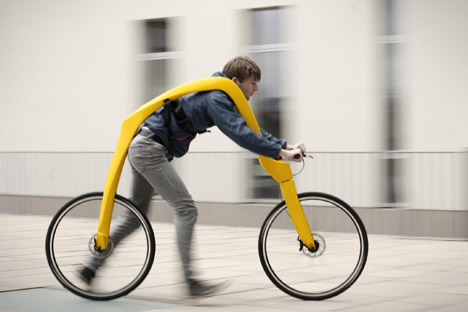 That takes care of what; as for why:After analysing the original running machine constructed by Karl Freiherr von Drais, the inventor of the velocipede that was basic to the bicycle, we liked to revive that principle. So we put some questions: "Does the running machine make any sense for adults nowadays? If yes, how and where could it be useful?" "How can we offer a certain amount of mobility to people, who are by any reason not able to ride a bike (or drive a car)?" 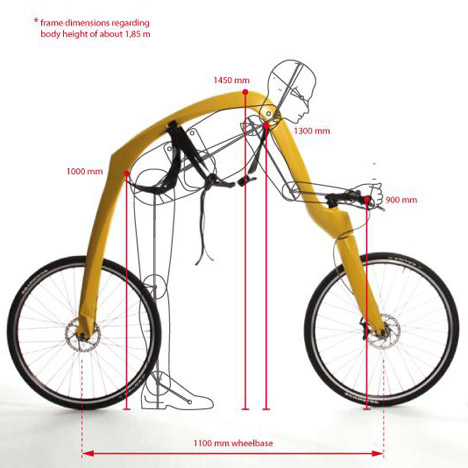 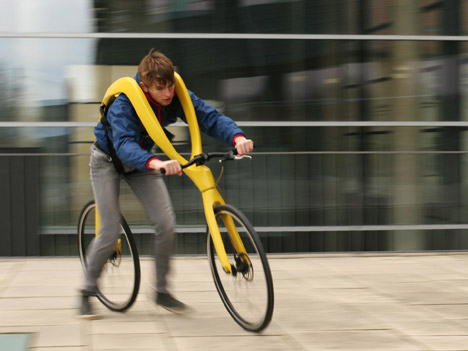 Childrens' balance bicycles are perhaps the last vestige of the draisine of lore: the pedal-powered drivetrain was the major innovation of the modern bicycle—this so-called 'safety bicycle' evolved from the penny farthing, itself a successor to the draisine—and the bicycle design hasn't changed much (Moulton, Obree, Y-Foil, etc. notwithstanding) for over a century. 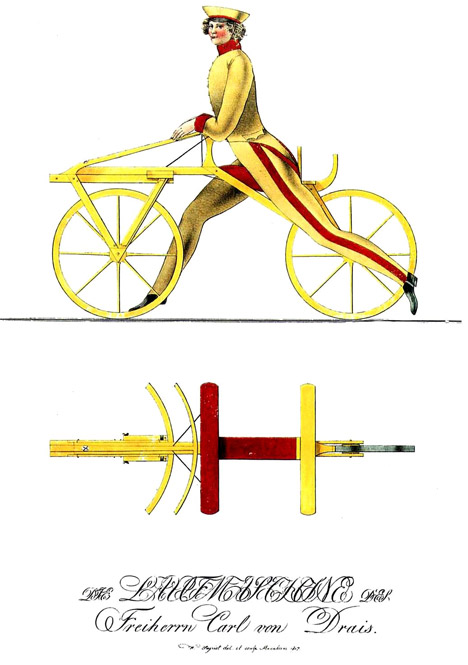 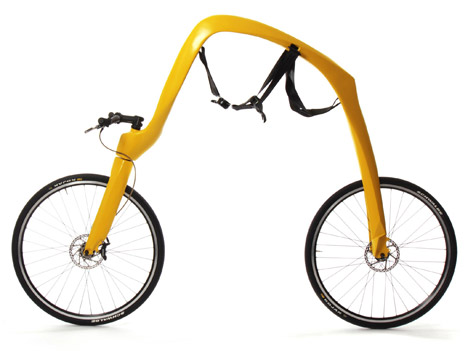 If the term 'safety bicycle' conjures a specialized assistive device, so too does the FLIZ look like an elaborate physical therapy apparatus. Where the inspiration was atavistic, the execution is futuristic: the bumblebee-yellow glass and carbon fiber frame has a slick, high-performance aesthetic. Thus, it comes off as a confused hybrid of the Batpod and the Flintstones car, biomechanical and armor-like yet almost too low-tech, forgoing mechanical advantage for bipedal locomotion.After testing a replica of the running machine of Drais we pointed out some negative aspects, e.g. the unsafe steering or the wide seat stay. Our idea then was "freedom for the running legs." Beside sketching we built a ridable prototype made of wood and tension belts, of which we realized the potential of the concept. Sketches and mock-ups were followed by the handmade prototype FLIZ. There is a 1:4 scale model as well. 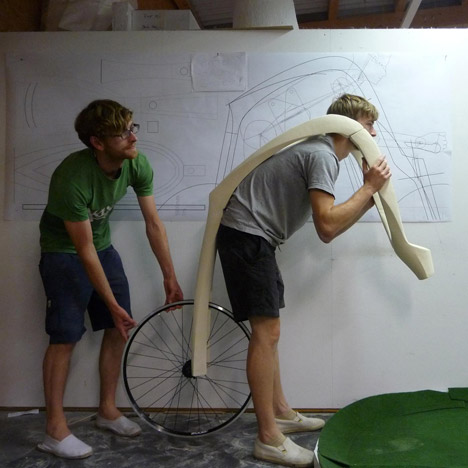 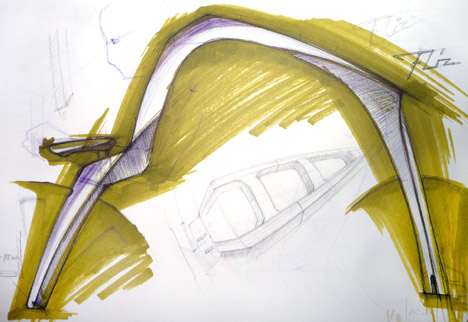 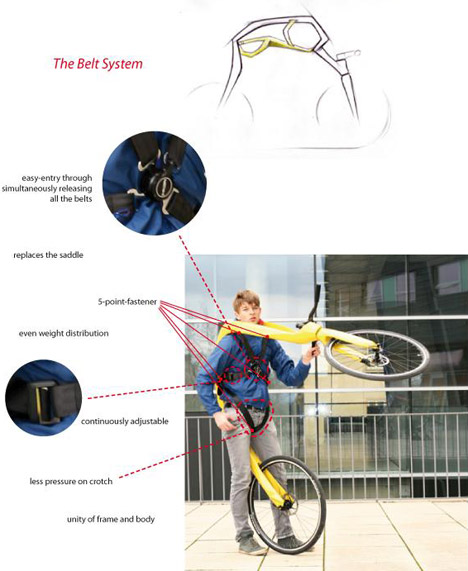 The main plaint against the FLIZ, as others have pointed out, is that it just looks awkward, something like what racewalking is to running. In other words, I'm not sure who the FLIZ is for: those "who are by any reason not able to ride a bike," yet who are capable of walking and balancing whlie suspended from a harness? Is the FLIZ a solution looking for a problem, or are we missing something? 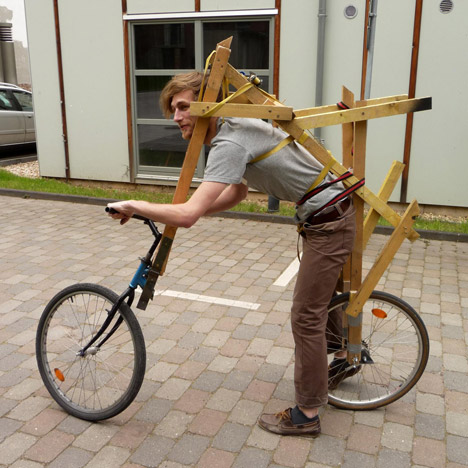