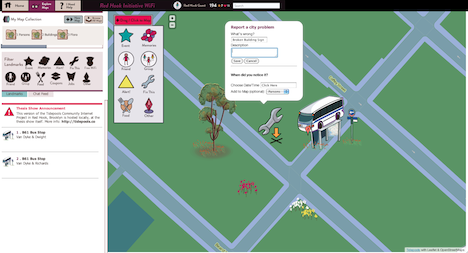 Go almost anywhere in the world, and you can load up a map on Google, Bing or Mapquest that tells you where you are and what's around you. The standardization of maps is an incredibly useful tool—instead of futzing around with how to read the map, you just have to worry about making sure you're oriented in the right direction (a problem that's also starting to evaporate with compasses in smartphones).

The problem is, you also lose a lot of diversity along the way. Most online maps are commercially oriented, as likely to advertise businesses that register to be listed as they are to share major community landmarks. And from a bird's eye view, spaces important for the neighborhood are almost indistinguishable from the rest of the area.

Enter Tide Pools. Developed by Parsons grad J. Baldwin as a  senior thesis, Tide Pools is a mapping-system-cum-mesh-network that's focused on local communities. Billed as "'Ushahidi' meets 'The Sims' API hub for local needs and culture," Baldwin's system differs substantially from global mapping sites like Google: maps can only be accessed when you're hooked into the local mesh network. 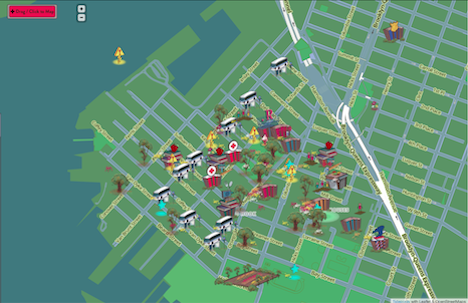 "The original intention came out of working with community in Red Hook," Baldwin noted in an interview with Core77. "The original piece of investigation was around where mesh networks exist. What kinds of local incentives can be conveyed on a mesh interface to convey the idea of a local network?"

Working with the Red Hook Initiative and now the Open Technology Institute at the New America Foundation, Baldwin realized that a map was the best way to enhance the local-ness of a mesh network. "It's open wifi," the designer said. "As soon as you connect to it and go to a web site, it automatically directs you to a community splash page."

This page lists announcements and news feed particular to Red Hook, and soon it will evolve into a more robust interface that includes a community-driven map. Over weeks of meetings, Baldwin and members of the Red Hook community evolved a look and feel, debating over how a school should look. It's had multiple uses, as noted on the web site:

Tidepools evolved over months of community meetings, brainstorming sessions and feedback through a forum on the WiFi network. Creating and sharing custom maps emerged from the desire to plot Alerts of where police "stop and frisks" were occurring. Broken building signs led to integration of the Open311 civic reporting tool. Bus arrival alerts came from the sparse, inconsistent public transportation in the area. Spreading awareness of locations and times of Upcoming Meetings & Events soon followed. 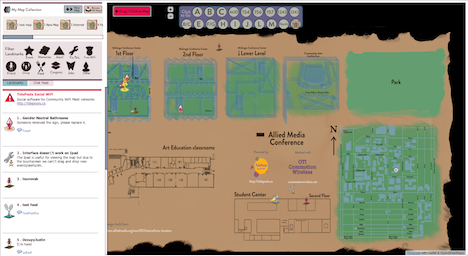 A version of Tide Pools rolled out in Detroit for the Allied Media Conference.

The designer broke out illustration skills to create this particular map, but designed the system so that anyone can contribute: "I've coded the back end to be as modular as possible so it can be reskinned for any community." That means any mesh network, whether in Red Hook, Detroit or Bo-kaap, South Africa, can create its own local mapping system and splash page.

For now, Baldwin is seeking out other designers and developers to join him and perfect the system. Both local and adaptable for global purposes, it puts mapping and networks in the hands of communities, with enough layers and customization to reveal the different richness and texture of communities.

"To me, tide pools are like microcosms of life scattered along the beach. When the tide comes in, the these tiny worlds mix, some stuff stays, other things leave to neighboring pools or the greater ocean. A cross-pollination occurs, cultures mix, gentrification, de-gentrification, a fish migrates from the very first pool to somewhere near the end of the chain."

"The Internet is an ocean," Baldwin continued. "Communities are ever fluctuating tide pools."