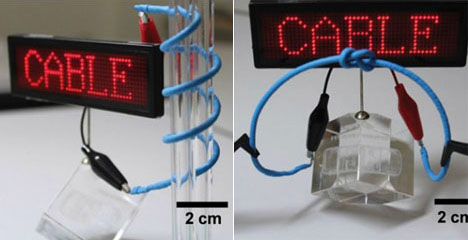 Researchers at LG Chem, an offshoot of the South Korean electronics giant that is quietly one of the largest chemical companies in the world, have developed a battery with a whole new form factor: Wire.

Their flexible, cable-like battery is just a few millimeters in diameter, yet rugged enough to be wound into tight radii and even tied into knots. The presumed next steps in the development will be shrinking the battery; during testing researchers were able to power an iPod Nano for 10 hours, but it took a battery 25 centimeters long to do it.

Scoop-getter ExtremeTech reports that LG is shooting for mass production in 2017, and that batteries like these will eventually be able to be woven into textiles. They also write that if the cable batteries were to see mass uptake, "new form factors [for devices requiring battery power] would explode onto the market."

And what might those new form factors look like? I'd like to see shoelaces powering some type of drying mechanism in shoes for when you inadvertently get caught in the rain. But we're hoping you Coroflotters have got more ideas than that.