Fan fiction, or "fanfic," is the phenomena whereby fans of a particular fiction series like Star Wars or the Harry Potter books begin writing their own spin-off stories to share with other fans. Writers get points from the community for both how interesting their stories are and their fidelity to the universe of the original; for example, no one gets kudos for writing about Han Solo running an auto body shop in Massapequa.

The closest industrial-design-related thing I can think of to fanfic are those RC guys that we saw in the S.H.I.E.L.D. helicarrier post, though you could argue that, impressive as it is, it's not quite ID. But an interesting graphic design version of fanfic just came to my attention: Darren Crescenzi, a Portland-based Brand Designer for Nike and a Game of Thrones devotee, has essentially "re-branded" the house sigils from George R.R. Martin's five-tome epic. (By "house sigil" I mean coat-of-arms, a family crest; click here to see an earlier post on the subject.)

As reported by Fast Co., Crescenzi re-interpreted what were of course only written descriptions of each sigil mentioned sporadically throughout the books, and found himself engaged in a massive graphic design exercise:

"That endless pursuit of visual consistency [required at Nike] was one of the driving forces behind the look and feel of the poster. I never thought of the project as a series of logos; The approach was much more that of creating an icon set." 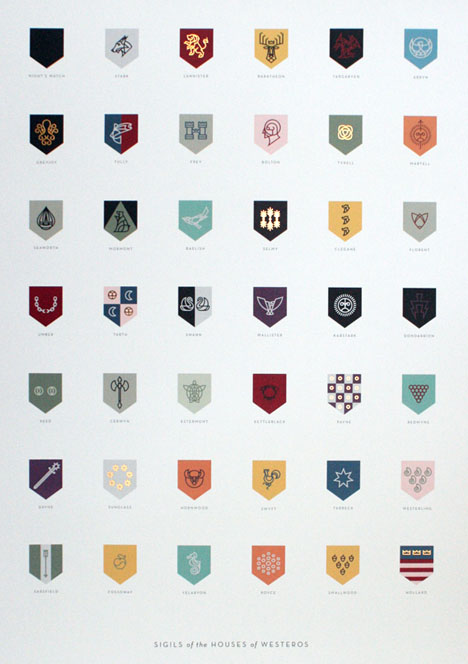 Crescenzi's finished product, which comprises some 42 crests on a poster, is undeniably beautiful. However, he is selling them as prints, which somewhat alters the project from being a labor of love to a vehicle for profit. That makes us very curious to see GoT author Martin's take on them, as he is famously prickly about fan fiction, particularly where it concerns profit.