Designing for Nostalgia--Is the iTypewriter Part of a Larger Trend? 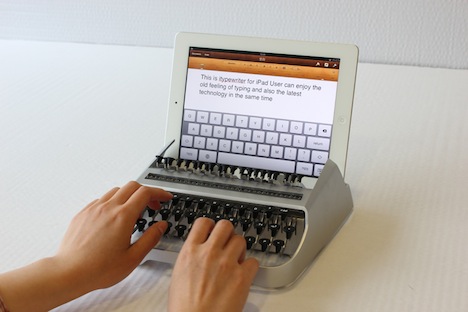 The iPad, as they say, is the ultimate consumer machine. Deprived of a proper a keyboard, it's more akin to a personal media consumption device. Certainly, either with the on-screen keyboard or an attachment, work can be done on it—hence the popularity of Pages on the iPad. But more often than not, it's better suited for reading and watching rather than writing and creating.

Recently, we at Core77 tweeted about the iTypewriter, a tool that retrofits your iPad into a typewriter. Drop your iPad into the slot in landscape mode, and you can type like a regular typewriter, with fully swinging arms that tap directly onto the screen for you. Needless to say, the tweet went viral, with over 350 retweets.

According to the Cult of Mac, iTypewriter creator Austin Yang designed it for elderly people: "even though elderly people have never used a computer or iPad before, they're familiar with a typewriter, so the iTypewriter helps them connect with their device." True or not (as I type this in a cafe here in Los Angeles, an elderly woman is watching a movie on her iPad), I think the number of retweets reveals that the real appeal of the iTypewriter is for nostalgic hipsters looking for some retro technology.

Because of their size and futuristic qualities, the iPad and iPhone make good tools for retrofitting. Take, for instance, the Atari Arcade, a joystick and dock for your iPad that turns it into a portable machine straight out of the 80's. Not as retro as a typewriter, to be sure, but far back enough as to seem obsolete. Then there's the trend of making retro iPhone cases, whether that be cassette tapes and Game Boys or older versions of Apple products.

The 80's in particular seems to be a hit with nostalgic types, with a black and white Apple OS GUI skin for your OS X machine. And don't forget, of course, the popularity of 8-bit music, a resurgence powered along by trends in techno and dubstep. There are Polaroid filters for your phone, and the return of the Polaroid itself. And let's not forget Instagram, which rose to fame thanks to nostalgia for photos that weren't perfectly crisp to begin with.

Maybe it's a sign that the kids who grew in the 80's are now in their late 20's and 30's, old enough that the slings and arrows of adulthood are weighing them down and young enough to wish they could go back to a simpler time, when all you needed in life was a Discman, a Game Boy, a film camera and a paperback book to get you through a long flight. Or perhaps it's a way of re-examining classic designs (I don't see anyone remaking AOL, for instance) in a new context. Or maybe I'm just overthinking it.

What do you think, dear readers, of the retro trend? Other cool designs and objects from the past that are popping up today? Is it mere nostalgia, or maybe more?

Designing for Nostalgia--Is the iTypewriter Part of a Larger Trend?