Creating a Killer Product: Just What Is It About the BUG-A-SALT? 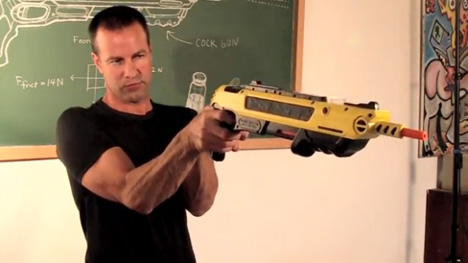 With nearly half a million dollars in funding and just under five days to go, Lorenzo Maggiore's BUG-A-SALT is on track to be IndieGoGo's most lucrative campaign ever. It's been making gizmo / gadget / public-interest-story rounds for over a month now, since it launched and quietly went viral to the delight of the blogosphere and the nearly 10,000 backers looking to take pest control into their own hands. 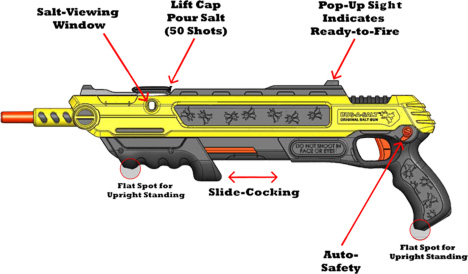 Suffice it to say that Core need not co-sign to help Maggiore—who is not a designer but a Santa Monica-based visual artist, by the way—cross the threshold.

But what is it that makes the BUG-A-SALT so compelling, a runaway hit as opposed to a shot in the dark? Is there a darker subtext to the fact that unmistakable typology of a lethal weapon has been adapted for home use to be a palatable (no pun intended)—if not altogether playful—solution to a household problem?If the broad acceptance of the device suggests that it is somehow entirely unobjectionable, even desirable ("Makes a great gift!" according to commenters), it is precisely because flies are universally regarded as a nuisance, deserving of death by projectile sodium chloride—apposite comeuppance, perhaps, for a symbol of pestilence and decay. A quasi-militant call to action on the website—accompanied by a Photoshopped image of Charlton Heston—reads: "These disease carrying gangs and their maggot counterparts must be exterminated at all costs. We the people must join forces to combat these $h*t breeding motherfu*ker$!" 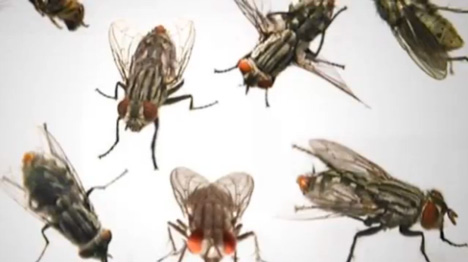 Similarly, the copy for the "Lone Gunman" package ($40) takes a slightly more cliché 'covert ops' tone (of course, the BUG-A-SALT's underwhelming 2–3 ft range is perhaps more gripe-worthy than snipe-worthy):You are the asset, the cleaner, you work alone and prefer it that way. A target has been established and plans are laid for his "trip." All that remains to finalize the "transaction" and move to the next "client." Hell, you probably live alone anyway, just clean up will ya? And no shooting the cat! 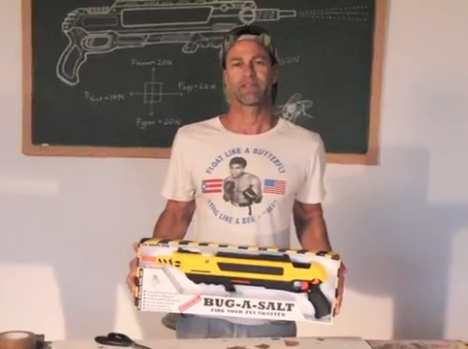 Yet the BUG-A-SALT does not glorify violence so much as it gamifies the act of eliminating a pest, elevating a mere annoyance into an opportunity for entertainment, a cheap (well, $30) thrill that flies in the face of the Confucian wisdom to not kill a mosquito with a cannon. Hasbro aesthetic notwithstanding, the patent-pending product offers users a vicarious form of self defense: there's no denying the mass appeal of a faux-firearm that offers the instant gratification of exterminating tiny terrorists that threaten our everyday domain. 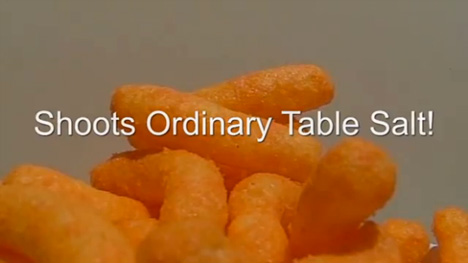 Even its saline ammunition is a interesting choice. Besides inviting the titular pun, the mundane parity between table salt and the housefly feels uncannily felicitous, in a who-woulda-thought kind of way. The ubiquity of the substance also obliquely refers to the BUG-A-SALT's lowest common denominator appeal, which, again, is its greatest selling point.

So considering that he was only seeking $15K in the first place, Maggiore has hit it out of the park, consistently stoking the publicity with a number of videos, including a clever use of music and a bizarre, outsider-art-filmy piece to complement the media mentions. (NB: Is it just me, or does it look like the flies in the videos are already dead—i.e. they're swapping them in for the kill shot—like shooting flies in a YouTube video?) 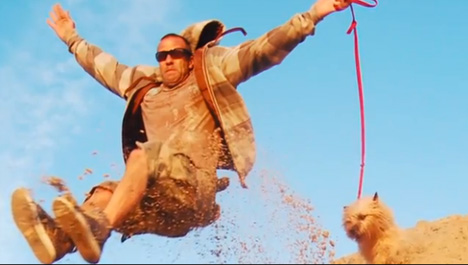 Moreover, his artless demeanor in the pitch video is subject to what is surely fruit(fly)less analysis, begging the question as to whether the entire campaign is some kind of elaborate art project. According to the latest Indiegogo update, from "one of Lorenzo's team members": What has he tapped into? What is the artistic element here? Its a collective experience already with all of you, and isn't that what looking at art can do—create a common shared experience linking us all together? "Don't kill Spiders with it" Loren says to me the other day and I wonder about his split view of the insect world: good insects, bad insects. And Mr. Pinch, his Earwig logo and element in many of his paintings going back years—what kind of insect is he with his discombobulated expression, neat little bowtie and pincer legs? Is he collecting that $100 bill or handing it over to buy a few guns for himself to hunt the pesty flies in his life? 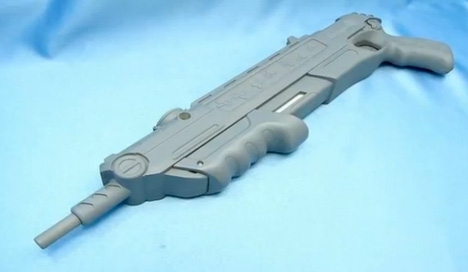 Rhetorical questions aside, the BUG-A-SALT team seems earnest in its efforts to build a sustainable business out of the Indiegogo campaign; they make a reasonable argument for their choice to stick with a Chinese manufacturer:As for making the product in China, we recognize that this is a hot button issue in these current times. We have and continue to investigate ways to possibly do some of the manufacturing here in the USA. It is very expensive to make them here and price them at any sort of realistic level that most people would buy them at.

That said, we have already created a few new jobs for people here in the USA and there are a host of other US based individuals and companies that have begun and will continue to generate income and profit from this project (bookkeepers, patent lawyers, fulfillment companies, contract employees/consultants, Indiegogo, Paypal and more). We are proud of that and it's only the beginning. Knock us if you want, but better yet, send us your ideas about how we can do it better (If your uncle/aunt owns a plastic injection mold business here in the USA and wants to put a bid in, have them call us). We dig the debate because we live, work and support the American Dream here as well.

So let's not get ahead of ourselves here: Maggiore is probably just a dude who likes yoga and surfing, and now that he has a claim to fame, I'm curious to see where he goes from here: at worst, crowdfunding has made him the product design equivalent of a one-hit wonder...

Creating a Killer Product: Just What Is It About the BUG-A-SALT?