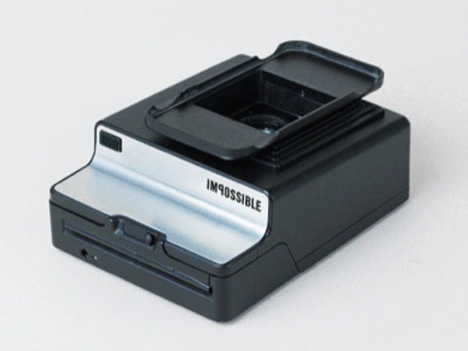 The Impossible Project has been making headlines for several years now, since founders Dr. Florian Kaps, André Bosman and Christian Lutz set out to revive Polaroid in 2008. They've come a long way since the Times profiled the company in 2009, and we've been excited to share newer developments, such as this Science Channel short on the technology behind instant film and an exclusive photo gallery of their factory.

After nearly half a decade of research and development, we're pleased to announce that it's finally possible to pre-order their first iPhone-to-Polaroid device as of this very morning: the Impossible Project has launched a Kickstarter project for the Impossible Instant Lab, which allows cameraphone shutterbugs to print their images as genuine Polaroid snapshots, iconic white border and all. Dr. Kaps recaps the journey and demos the Lab in the pitch-perfect pitch video:

Can't get enough of that Teutonic accent? Monocle's got a nice report from Enschede from May 2010, shortly after the Impossible Project released their first instant films—suffice it to say that this isn't your average "Design for Nostalgia" project.