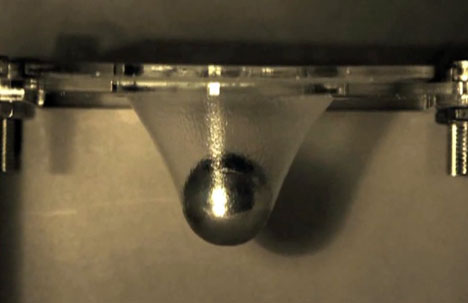 Lately we've been talking about aerogels, and now we turn to a material with a similar name but very different properties: Hydrogels. A hydrogel is a particular combination of polymers that is paradoxically both soft and fragile, essentially a jelly that can shatter. But a research team from Harvard has recently developed a novel strain.

Led by materials engineer Zhigang Suo, the team's hydrogel "recipe" has created an extraordinarily strong jelly-like substance that can stretch by a factor of twenty without breaking. Watch here as they drop a steel ball into a sheet of the stuff:

Despite its jelly-like consistency, Suo claims that the stuff is so strong that you can't break it with your hands.

There's no word on what they'll use the stuff for, but previous versions of hydrogel—like this velcro-like variant produced earlier this year—are being eyed for medical applications. But what I wouldn't give to see Suo's material in the hands of an industrial designer. A seating surface made with the stuff, for instance, could go from flat to expansive. And because the material can go from flat sheet to something far more voluminous, its space-saving applications are potentially tremendous. Whatever the maximum size of the expanded shape of the product would be, you'd be able to store twenty of them in the space of one once the thing had been re-compressed.

Given free rein, what would you use it for?