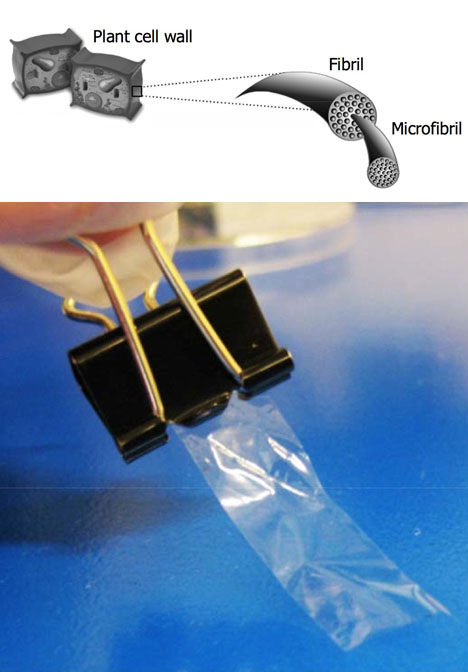 With their absurd strength and tiny size, carbon nanotubes were supposed to revolutionize what we humans can build. The problem is the stuff is expensive to manufacture. But now a viable, affordable and sustainable alternative is emerging in the form of a material called NCC, or nanocrystalline cellulose.

The material has a lot going for it: It's made from wood pulp, which is essentially waste. Producing it is inexpensive. It can be made colored, transparent or even iridescent. It's light yet strong, with a strength-to-weight ratio some eight times that of stainless steel. On top of that, it freaking conducts electricity. According to this article in New Scientist, Pioneer will be using it to make flexible e-displays, IBM will be putting it in computers, and the U.S. military will be making body armor and ballistic glass out of it.

"It is the natural, renewable version of a carbon nanotube at a fraction of the price," says Jeff Youngblood of Purdue University's NanoForestry Institute in West Lafayette, Indiana.

...Production of NCC starts with "purified" wood, which has had compounds such as lignin and hemicellulose removed. It is then milled into a pulp and hydrolysed in acid to remove impurities before being separated and concentrated as crystals into a thick paste that can be applied to surfaces as a laminate or processed into strands, forming nanofibrils. These are hard, dense and tough, and can be forced into different shapes and sizes. When freeze-dried, the material is lightweight, absorbent and good at insulating.

"The beauty of this material is that it is so abundant we don't have to make it," says Youngblood. "We don't even have to use entire trees; nanocellulose is only 200 nanometres long. If we wanted we could use twigs and branches or even sawdust. We are turning waste into gold."

The U.S. Department of Agriculture has heard the "gold" part of that statement loud and clear, and they're believers. Just last month they announced that they've opened an NCC-producing factory in Madison, Wisconsin--only the second such production plant in the world. (The Canadians beat us to it by opening their own facility in Montreal last year.) You don't think of the USDA as being on the cutting edge of materials science, but there were clear economic incentives for them to build the facility:

The U.S. and other nations will see numerous benefits from the commercialization of wood-derived cellulosic nanomaterials. Development and commercialization of new lightweight, high-performance wood-derived products can help reduce fossil fuel consumption and greenhouse gas emissions while increasing the potential for rural manufacturing opportunities, including the creation of many new high-paying jobs.