Here are a pair of inspirational stories of post-injury redemption via Inhabitat: a heartstring-puller about Beauty the bald eagle with a 3D-printed beak, and the story of Sun Jifa, who should probably get an honorary Core77 Design Award for the DIY category for making his own prosthetic arms out of scrap metal.

The high-tech tale, on the other hand (no pun intended), dates back to 2008, though the backstory begins in 2005, when a bald eagle named Beauty had the top of her beak shot off and was left to die. "The resulting damage from the bullet left Beauty with only a small portion of her left upper beak and nearly eliminated the majority of the right side." The Alaskan rescuers who found her nursed her back to health but it was Jane Fink Cantwell of Birds of Prey NW, an Idaho nonprof, who took up Beauty's cause, connecting with Nate Calvin of Kinetic Engineering Group to create a 3D-printed beak for the disfigured raptor. 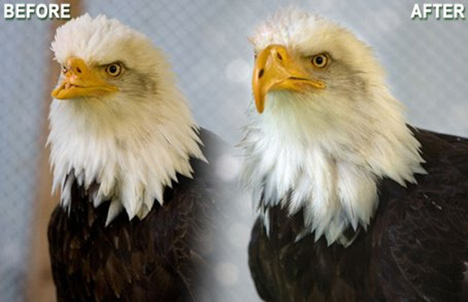 I'd hesitate to agree that Nate Calvin is "literally breaking new ground" here—it's a beak, not a building—but the task certainly demanded a bit of innovation and experimentation. 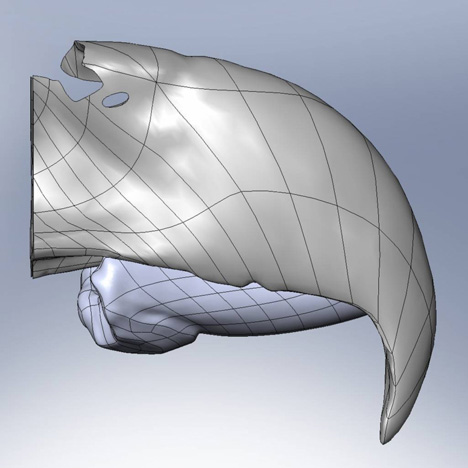 While the above clip glosses the 18-month R&D process behind the beak, an ABC story features footage of the fitting process; considering that the first video actually shows the dentist performing the procedure, I was curious whether they had cast the damaged beak for fit. The second video (below) suggests otherwise, and I imagine that they modeled the cavity based on other specimens as Calvin and his colleagues are shown determining the fit through trial-and-error. If the videos express a general sense of hyperbole with regard to the bionic applications of rapid prototyping—ABC namedrops stereolithographic assembly, "worth $50,000"—bear in mind that this was back in 2008, and it looks like the ABC clip was produced prior to the actual operation.

The segment concludes with a slightly confused note on poetic justice, but the Grist elucidates Beauty's tale with a metaphor about America: "Ruined by guns, kept alive by nonprofits, technology comes to the rescue? Sure, I think it works." 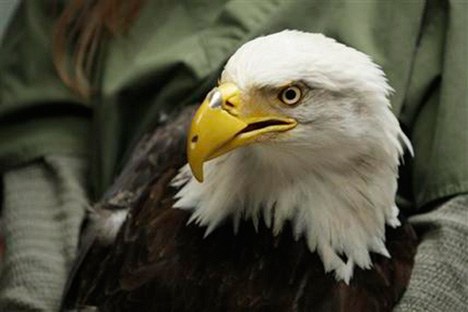 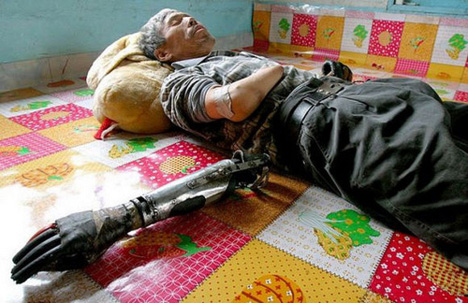 You couldn't make it up: Sun Jifa, a 51 year-old farmer from Guanmashan, Jilin Province, in Northern China made his own hands. The self-startermaker couldn't afford pricey prosthetics when he was hospitalized after an incident involving the premature detonation of a homemade explosive (before you ask, he was making it for blast fishing), so he spent nearly a decade doing it himself. Made from "scrap metal wires and pulleys," Sun's prostheses cost him "virtually nothing," and he reportedly "plans to develop the design for other similarly disabled people."

MicGadget has a series of videos from a Chinese television program—from what I can understand, the video above more or less explains his situation with allusions to Edward Scissorhands (and photos of Sun playing a mouth harp, as countryfolk are wont to do). Nevertheless, they do relate a bit more information:There are hooks on both of his bionic hands, but they're not for self defense. The hooks are to clasp the holes on equipment like farming tools, so Sun can lift those heavy tools up without breaking his bionic hands. The hook is removable, Sun can take them down whenever he wants to. Without the hook, the movement of the hands is controlled by using his elbows. For example, when his elbow moves forward, his palm will open. 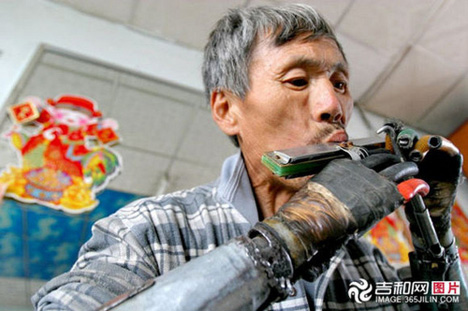 The Daily Mail is more concise in their reporting, though they can't resist referring to Sun as a "real life tin man." (I'll confess that I was thinking about trying my hand at composing a few scrap metaphors: "teach a man to fish" and "one hand washes the other" come to mind.) 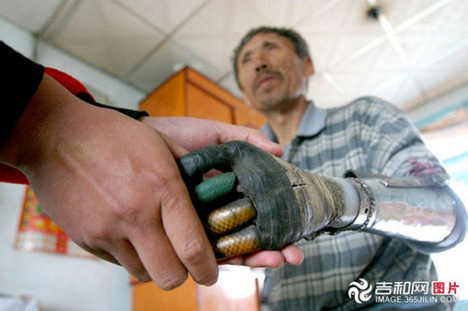 Of course, digital fabrication has grown by leaps and bounds since then, and we continue to see examples of new developments of RP'd/3D-printed medical devices, including intricate bespoke prosthetics and ABS assistive devices. 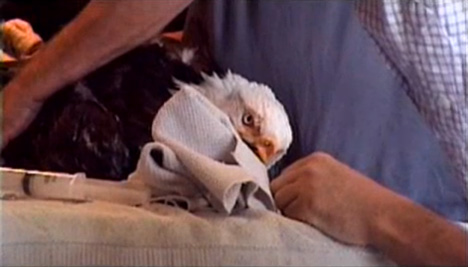 But insofar as the two stories represent opposite ends of the spectrum in terms of prosthetic innovation, they capture the current state of DIY ingenuity and applications for digital fabrication. Together, these stories illustrate not just the potential for new approaches to medical technology but also the eventual convergence of ideas and means of production: perhaps one day, a farmer will be able to design and 3D-print a prosthetic arm, or an ornithologist will be able to do the same for a beak... 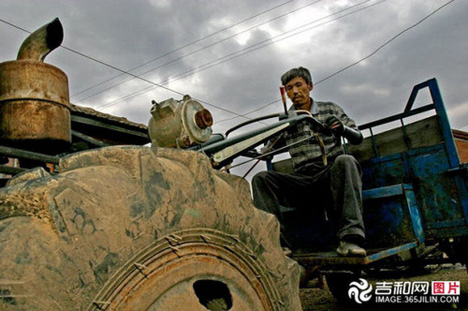 [NB: For sake of counterargument, I highly recommend Kevin Quigley's excellent essay "3D Printing - Then, Now and in the Future"" which offers caveats against such unbridled optimism: "I 'get' 3D printing. I understand the backstory to the hype. But that is all it is. Hype..."]

And don't miss our latest photo gallery, from Superhuman, on view now at London's Wellcome Gallery through October 16.