American Hardwood Export Council and RCA are pleased to present Out of the Woods, an exhibition on the occasion of London Design Week, at the Victoria & Albert Museum. The exhibition is part of the larger Brompton Design District. An innovative collaboration between the american hardwood export Council and the Royal College of Art Design Products programme offers a fascinating approach to working with an age-old material—American hardwood. Out of the Woods explores the creative and environmental potential of this naturally renewable material by looking at the entire life cycle of each product. Working with British furniture producer benchmark, internationally renowned for its craftsmanship in wood, RCA students—under tutors Sebastian Wrong (Established & Sons) and Harry Richardson (Committee)—have each designed a chair or seat using American hardwood. The production was carefully monitored with the help of sustainability experts, P.E. International, to prepare an accurate life cycle impact report for each chair. The reports contribute to AHEC's ongoing research into hardwood's sustainability credentials and inform the students of the full cradle-to-grave environmental impact of their design and material choices. Inspired by the life cycle of each chair, twelve well-known writers have created a work of art to tell the story: Adventures of Twelve Hardwood Chairs.

The designs have been developed in to working prototypes with the help of Benchmark, internationally renowned for its craftsmanship in wood and long-standing relationship with designer Terence Conran. The students camped out on Terence Conran's lawn by night and descended on Benchmark's workshops by day in early July where the company's highly skilled craftsmen, led by owner Sean Sutcliffe, helped them turn their ideas into reality.

Several of the designers in Out of the Woods participated in the school's collaboration with Yamaha, not to mention the most recent graduation show, and the results are strikingly diverse. AHEC has also posted a series of short videos about the individual pieces (two projects per clip), embedded below. Nearly every single one is worth seeing in action, and it's definitely worth hearing the designers explain their work in person. 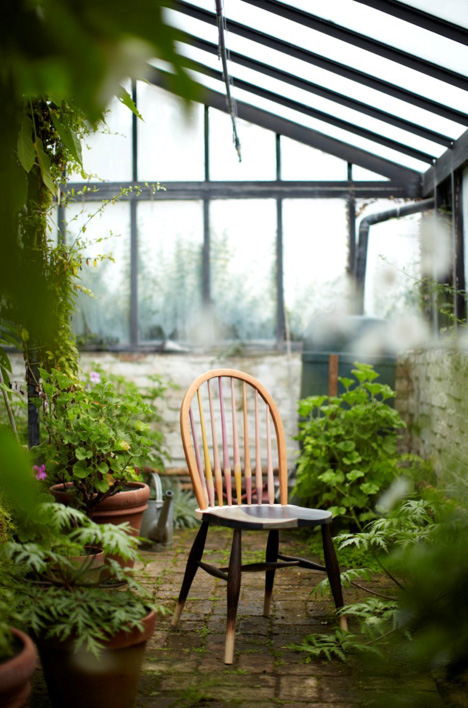 Prior to enrolling at RCA a year ago, Lauren Davies wanted to create something more permanent than the set designs she'd been working on, and she's got something to show for it. The "Leftovers Chair" is a "chair that could be described in the form of a recipe." The iconic Windsor form is made from "a variety of American hardwoods... several of which are nutbearing species" and further infused à la gastronomy: "the seat... is 'pickled' with vinegar, the legs are 'smoked' and the spindles of the back are 'flavoured' with fruit essences" (which impart their subtle coloring). 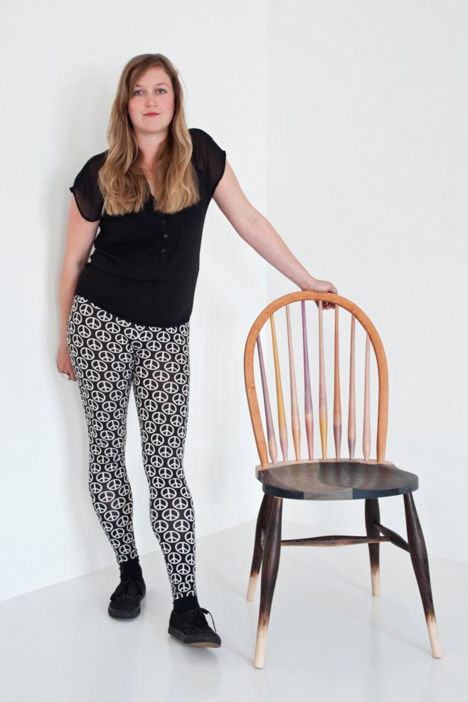 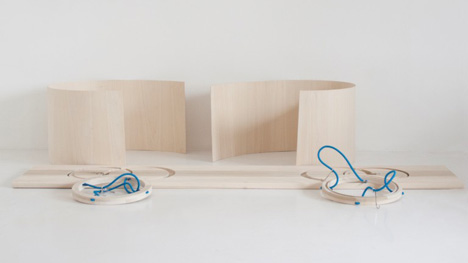 If Nicholas Gardner and David Horan seem like an unlikely pair on paper, you wouldn't know it by looking at their brilliant "Phyllida" bench. The former, an RMIT alum (in arts and furniture design), "came to RCA in order to get a more conceptual grasp of design," while the latter studied mechanical engineering and transport design prior to enrolling at RCA. (No disrespect to the other designers, but the video for "Phyllida" is probably the must-see of the bunch.)...inspired by a work by the sculptor Phyllida Barlow, Horan and Gardner's design wraps a thin material to create not just volume but also a surprising amount of strength. Pieces of ply just 1.5mm thick are rolled up to create the legs of a 2m-long bench in solid tulipwood. The legs fit in to tulipwood base rings, and to a circular groove in the underside of the bench. When the bench is to be carried, the 'legs' unroll to become flat, and the base rings slot in to another set of grooves in the underside of the bench. 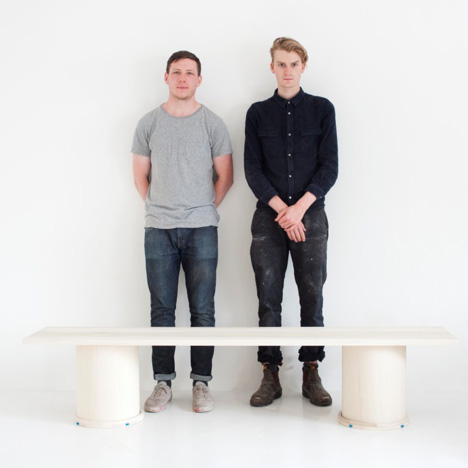 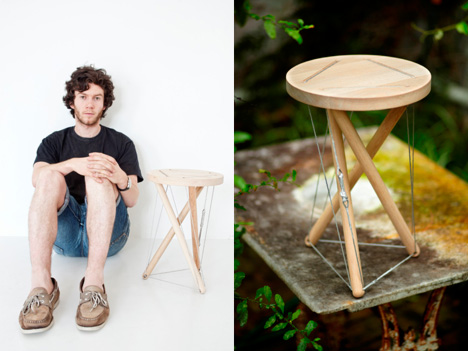 We've already seen one piece that Sam Weller will be exhibiting during London Design Week, and his "Snelson" stool nicely matches the "Holdfast" bookshelf. The piece takes its name from a sculptor who also inspired Buckminster Fuller himself; Weller's homage is effectively the smallest possible functional tensegrity structure, which uses dyneema rigging to ensure its tension. 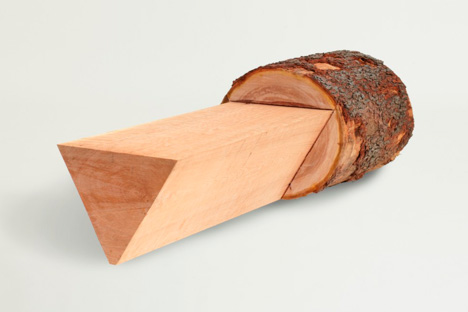 Half-Chilean designer Anton Alvarez went to Konstfack in his native Sweden before arriving at RCA, where he's just completed his degree. Using a portable saw mill and chainsaw, he's created his "Tree Furniture" bench from a single untreated log of American cherry. Since it is intended to remain in situ, where the tree has fallen, "almost all of the impact associated with this bench relate to the material, since there is in theory no transport to site, and no finishing." 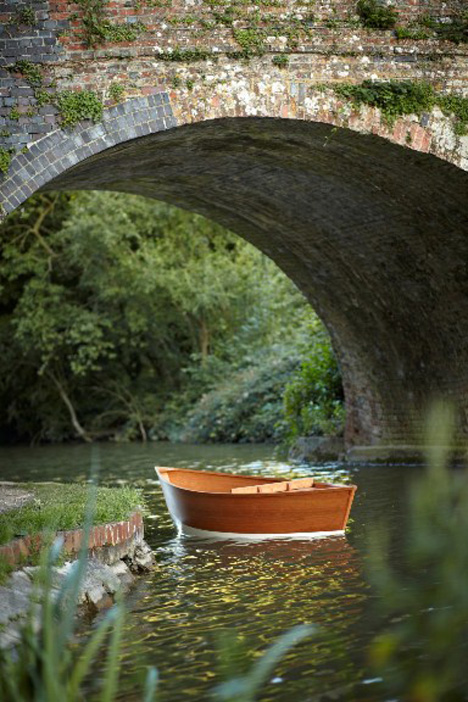 Tom Gottelier's name has stuck with me since I first discovered his 'memorable work' last year, so I was curious to see what he and his Swedish classmate Bobby Petersen came up with for Out of the Woods. "Floating Chair" is perhaps the most complex and 'impactful' project in the exhibition, with a propulsion system that consists of two small motors (one on either side of the boat) and an iPhone. 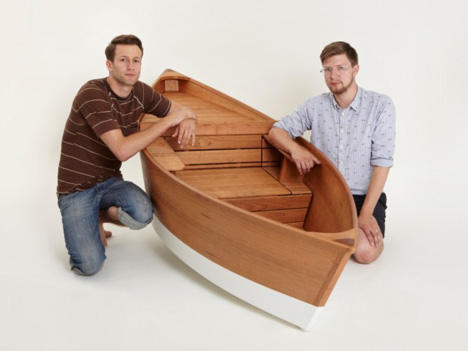 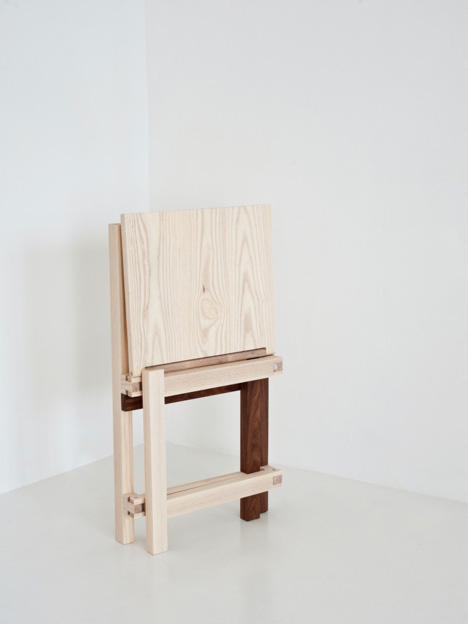 Since Norie Matsumoto's "Folded Chair" was intended to be a "beautiful timber object that could also work as a chair," she started with the aesthetic of the folded chair, which was the basis for the functional piece, made of ash and walnut. The Japanese designer was previously an accounting assistant in Tokyo before she decided to pursue her passion for the crafts in the UK, where she has just completed her degree. 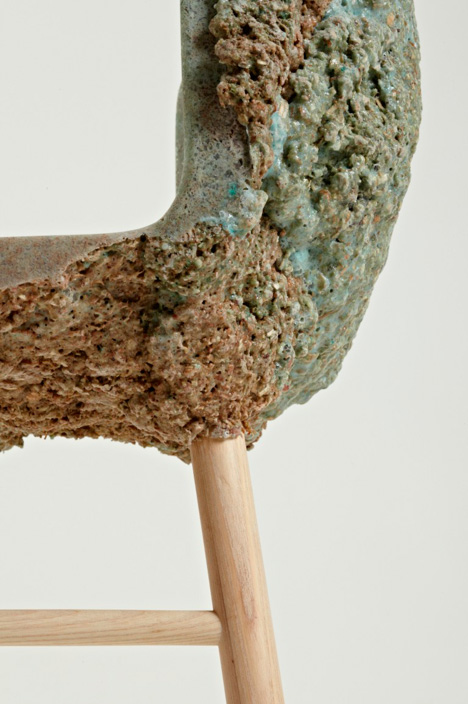 James Shaw and Marjan van Aubel's "Well Proven Chair" stands in stark contrast to the latter's recent minimalist material exploration, taking a compellingly grotesque appearance for its humble upcycled composition. "The starting point for the design of this chair was the fact that, even in a well-run factory, between 50 and 80% of the timber becomes waste... Following extensive testing, they came up with a combination of a bio-resin, water, and shavings of a mixture of lengths (generated by different operations), that created a kind of controlled explosion." 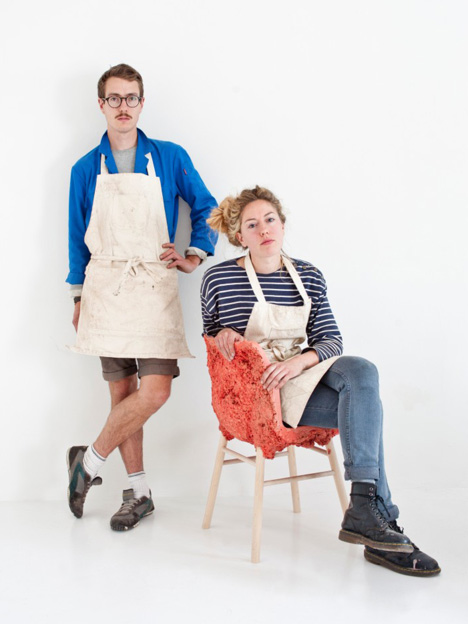 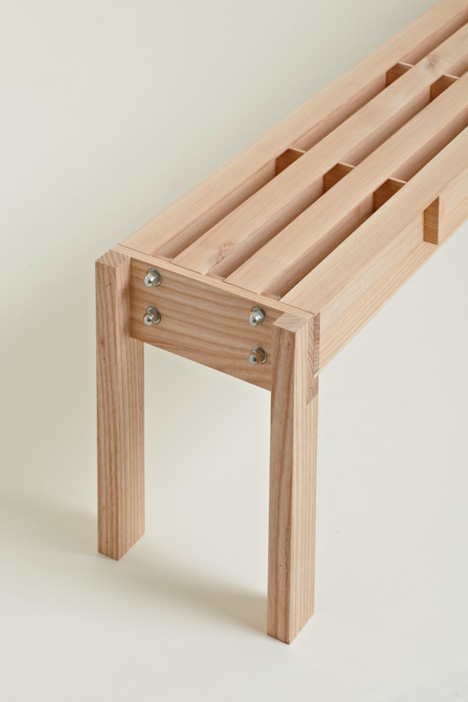 Although its length belies its [light] weight, Petter Thörne's "Beeeench" is perhaps the most straightforward of the pieces. The Swedish designer went from Konstfack to Copenhagen to Hanoi before enrolling at RCA, where he completed his degree this summer. 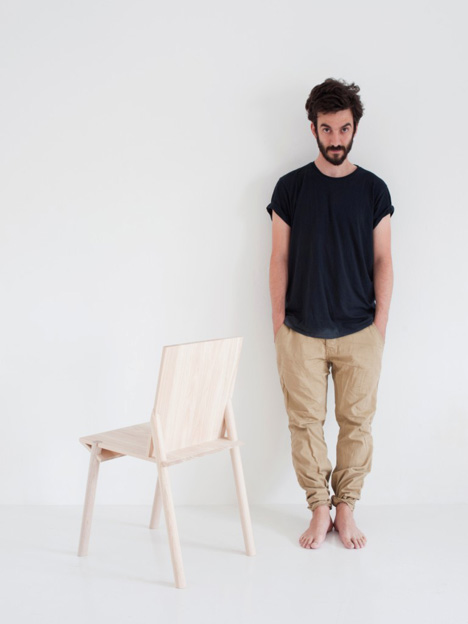 Santi Guerrero Font is one year into RCA, and though he hails from Spain, he took this opportunity to explore his interest in Danish design, "which typically showcases construction techniques." To that end, the ash "Num.4" chair highlights "where the legs pass through the structure, and where their ends become flush with the seat."

With his degree under his belt and a Dyson fellowship lined up, Michael Warren set out to "design the chair with the lowest possible environmental impact." The result, "Designed Legacy," is composed of the thinnest—i.e. the most efficient—sections, with joints adapted from building frames and lamination in lieu of steam bending. 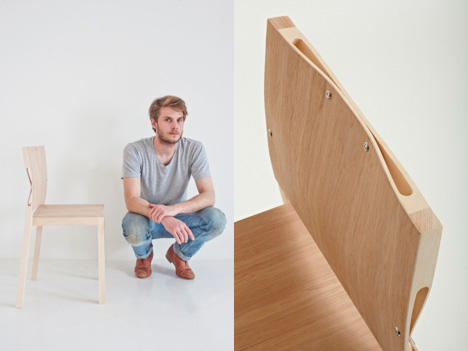 Nic Wallenberg, a RISD alum who has just completed his graduate degree at RCA, took advantage of the strength of hickory to create the "Squeeze" chair. The curves look as though they were achieved by steam bending, yet they are actually created by the weight of the sitter and a few bolts in key locations.

Mary Argyrou drew on her heritage for the "Solitude" chair, which is based on the chairs used in Cypriot churches. Both the form and the process—wood turning—are based on tradition, while the solid cherry construction imparts a necessary weight to the piece.