Why User-Centered Design is Not Enough, by John Wood 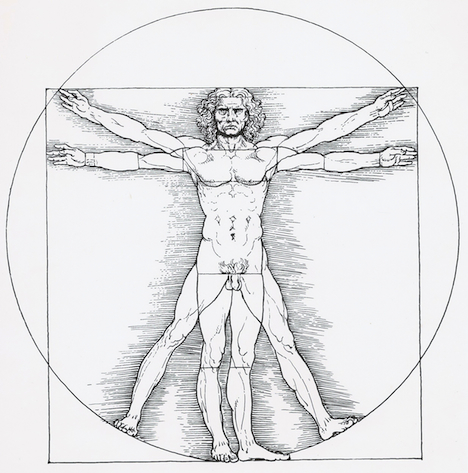 Utopia or Oblivion? Buckminster Fuller framed this question in his 1993 book of the same name, warning that mankind's prospects would go decisively one way, or the other. Twenty years on, it is clear that nobody could have answered his question with any certainty. This is because we are all entangled in it. Fortunately, most of us have heard of the butterfly effect, so we are slowly realising that each one of us has some responsibility for what happens. What does this mean for 'UCD' (User-Centered Design)?

Putting The User at the Center In 1966, Joseph Weizenbaum created ELIZA, a computer program for diagnosing medical conditions. It conversed with patients directly, via screen-based questions in everyday language. But it did it so cunningly that most correspondents thought they were talking to a human being. The question and answer routine was based on the psychotherapeutic approach of Carl Rogers, best-known for developing an extremely patient-centered approach. Technologically speaking, the program was very simple. First, it addressed the respondent using her first name, asked open-ended questions about their state of health and incorporated some of their own words in its answer. The strategy worked so well that users were convinced they were talking to a sympathetic doctor, rather than a machine.

How Useful is Humanism? One of the things we might deduce from Weizenbaum's experiment is that educated people become very susceptible to suggestion, once they are placed at the center of their emotional universe. The idea of user-centered design grew out of 'humanism', which can be traced to ancient Greece and the early Christians, who came to value the differences between individuals. However, while humanism has many admirable qualities, it is a dangerously incomplete basis from which understand things.

If we were to make a caricature of the humanistic world in picture-book terms, Nature would be depicted as a faint grey backdrop, with people standing out in bright colours. The growth of humanism gave us a strong belief in free will. More recently, in the era of consumption, it has tended to make us restless and unsatisfied. This is a paradox. In the 21st century, never have so many people had so much access to so much information. Yet, our species has become increasingly disconnected from the complex ecosystem that nourishes and sustains it. This is because, for the sake of convenience, we have manipulated, or dumbed-down our perceptions of what is immediately around us. What should worry designers, in particular, is that they played a major part in creating this artificial, user-centered world.The Customer is God Why do airlines offer free 'air miles' to the most privileged? Why do, even when their customers ask them not to, shopkeepers unthinkingly hand out plastic bags and cafes give away disposable napkins with their food and beverages? One reason is that it feels good to look after one's honored guests in a generous way, even if it means wasting resources.

Why is Apple now the most valuable company in the world? Yes, it is because their design standards are, compared to their rivals, pretty good. OK, it is also because, in business terms, a user-centered approach is a hell of a lot smarter than 'functionality-centered', 'engineer-centered', or 'producer-centered design'. This is why Samsung would love to be the world leaders in UCD.

But if we look beyond the unaffordable economic system and think about the future, things look very different. In the bigger scheme of things, user-centered logic implies that the user is right. It tacitly assumes that what individual consumers want will benefit the whole system. All over the world, people still say that the customer is either 'king,' 'queen,' 'emperor' or even, 'God.' This idea came from our feudal past, when servants were always less well-educated than their masters. This is no longer always the case. Mostly, in today's high-speed lifestyles, the idea that 'the customer is always right' is a cynical phrase. Deep down, most customers know that owning a cool product will not make him a cooler person. On the other hand, the smiling shopkeeper hopes, privately, that appealing to the vanity of the customer is enough to make her buy more than she needs.

Empowering the People? It is less than a century since the American Dream took root in the global imagination, and only a few decades since governments de-regulated the markets in order to maximise economic growth. These changes encouraged people from wealthy nations to see themselves more as consumers, rather than citizens. This was partly because economists and politicians could not see a way to distribute wealth evenly. They found it easier to stimulate over-production and to pay designers and marketing experts to harness envy, greed, acquisitiveness and a feeling of loss. On the positive side, the Enlightenment vision of a knowledge-based Utopia became increasingly thinkable, thanks to pioneers like Denis Diderot, Vannevar Bush, Ted Nelson, Xerox Parc, the Apple team, Nam Jun Paik and Tim Berners-Lee. This opened up the enormous potential for Open Source design and social networking. Nevertheless, gadgets like Facebook and Twitter have become as useful to the clandestine world of state surveillance and commercial manipulation as they are to a freer, more open society. 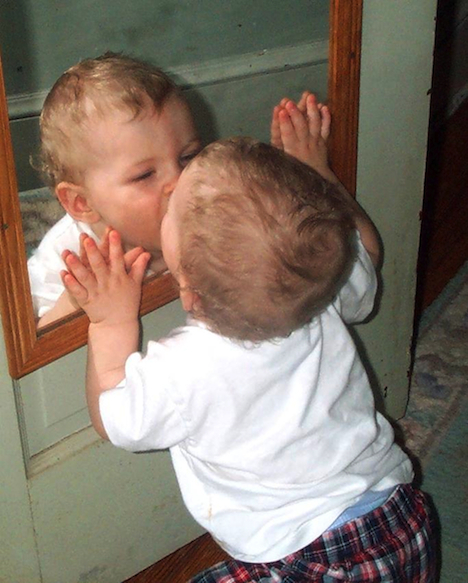 Does Consumption Dumb us Down? In 2012, while consumers are clearer about their rights, rather than their responsibilities, Utopia and Oblivion remain equally probable. In this increasingly commercial world, the citizen's economic duty is to shop until s/he drops. In the last five years, the mass media has used the word 'crisis' almost exclusively to describe a financial problem. It is seldom used to describe our prospects as a species. As politicians continue to argue for more, and yet more, economic growth the environment gently pushes us to the edge of oblivion. The melting rate of Arctic ice is now 50% faster than it was in 2007 the atmospheric CO2 levels have exceeded the much-feared 'tipping point' of 350ppm. The Rio+20 summit was a total disaster and the 2010 Nagoya Commission on Biodiversity failed to establish a workable remedy. Looks like it's going to be oblivion, rather than Utopia, then...Are we bothered? Not really. We have designed ourselves into a bubble of self-satisfaction. 'Solipsism' is a good word for it. It reminds us of the old story of Narcissus, who was became obsessively absorbed by his own reflection in the lake and failed to notice that a beautiful girl was trying to get his attention.

Does Design dumb us down? Many designers will, no doubt, object to this analysis. They will point out that UCD simply acknowledges the unique physical capabilities and needs of individual users, or types of user. While this may be a fair point, say, from a product designer's perspective, it overlooks the way that we urgently need more imaginative business models. We need to ditch worn-out economic theories and make our lifestyles less dependent upon cheap energy. In the current business climate a UCD is seen as a harmless conceit that will oil the wheels of commerce and help us all to feed our families. Ultimately, it may be the death of us all. One of the problems with this post-feudal, user-centered mindset is that it is a one-dimensional map in which only two places exist—master and servant. In the workplace, the designer is the servant and the client is the master. From a greater distance, the user is the master and the 'client plus designer' is the servant. Apple products may look cool on a small, consumer-centered map, but they might not look so smart on the big map, especially if we can see their true ecological footprint. This model is failing us all, because it ignores everything outside our myopic economic reality.

How Can We See the Bigger Picture? What kind of map would guide us to destinations that are beyond the 'user'? To answer this question we may need to think beyond design as we know it. At the end of the 19th century, the design professions emerged as a disparate set of specialist disciplines. Since then, universities have been lamentably slow at challenging these traditional boundaries of design specialism. Even in today's increasingly cross-disciplinary corporations, most designers are paid to deliver specialist solutions to narrow, profit-seeking problems, rather than as holistic thinkers who work for society as a whole. Our design research at Goldsmiths, University of London has led us to a more complex, less predictive approach that we call 'metadesign.' It assumes that, in order to reach Utopia, rather than Oblivion, we need a more joined-up way to design for living. This means rethinking everything, including the way humans feed, clothe, shelter, assemble, communicate and live together. It means designing at the level of behaviors, habits, beliefs and language. In short, it entails re-designing design itself.

Ruskin's Eco-centered Approach We have developed many theories that are enabling us to understand these issues. We have also developed quite a few practical tools that enable us to innovate at a more strategic, self-reflexive level. We call it 'metadesigning.' In trying to find a mapping system that goes beyond the well-worn UCD pathway between producer and consumer we looked at John Ruskin's model of craftsmanship. Although he did not describe it in these simplified terms, his description of the craftsman's pride in his work affords benefits at four locations (i.e. natural environment, client, craftsman and society). 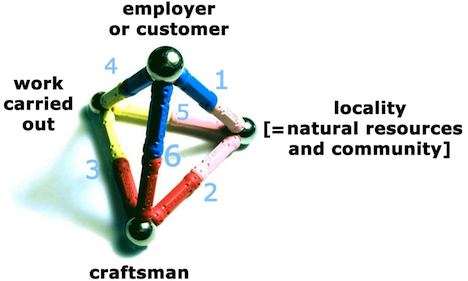 Working with a 4-fold System This is not the whole map, but it takes us a long way beyond UCD. Instead of one pathway we have six, which is clearer when we visualise the system as a tetrahedron (see below). This four-fold technique has proved invaluable on a number of levels. It does not stop the designer from trying to imagine standing in the shoes of the user. But it also encourages her to empathise with the client, the environment and/or the design itself. Moreover, by visualising all of the (6) relations, it enables her to visualise the 12 perspectives within the whole, simplified system.

Why User-Centered Design is Not Enough, by John Wood