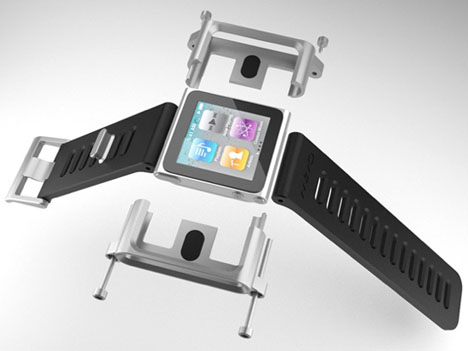 Up above is Scott Wilson's rendering for the LunaTik, which we consider iconic because it kickstarted Kickstarter for an entire generation of industrial designers. It was the first ID project that really put KS on the map for us, and once the final pledge tally came in—$942,578 over an initial target of $15,000—Wilson had to make some adjustments. As the principal of design firm MNML, Wilson knew what those adjustments were and how to deliver the finished product.

"We far surpassed our minimum order quantities from the factory," Wilson told us in an interview at the time, "so I have had to place a much bigger purchase order. After the Kickstarter period ends we will have an eCommerce site set up for additional online orders and from there we will probably offload the fulfillment and distribution to a 3PL (third party logistics) partner."

I consider the TikTok/LunaTik project as something that should go down in the ID History books. But while Wilson and MNML knew what to do, not everyone has their experience, which has resulted in the news we're delivering here.

It seems more than a few Kickstarter backers have been disappointed by their recipients' inability to deliver (which is perhaps why some Core77 readers have been critical of the LIFX, to name one project). Product design is no cakewalk, but it's turning out to be a lot easier to come up with a great idea than it is to have it manufactured and delivered.

To circumvent this, Kickstarter has instituted new rules sure to be a blow to many a would-be designer: Renderings and simulations are now banned!

Product simulations are prohibited. Projects cannot simulate events to demonstrate what a product might do in the future. Products can only be shown performing actions that they're able to perform in their current state of development.

Product renderings are prohibited. Product images must be photos of the prototype as it currently exists.

Yup, y'all are going to have to go back to physically prototyping things.

I'm not sure the rules are a step in the right direction. It's true that there's plenty of Kickstartees who can't deliver, but isn't this more about backers not understanding the role that renderings play in the industrial design process? Any thoughts?