Instant: The Story of Polaroid 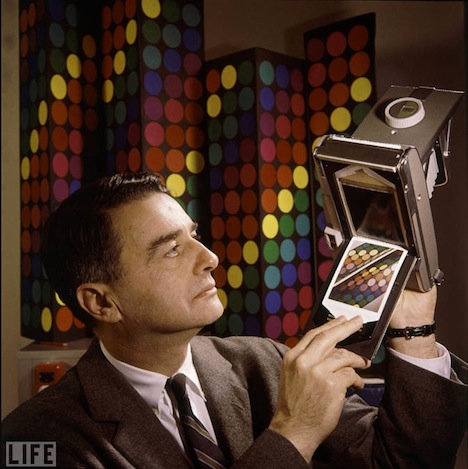 Photograph by Fritz Goro for LIFE

"Marketing is something you do if your product is no good. Instead, you have to show something to people that they had no idea that they wanted but that is irresistible." -Edwin Land

In 1947, Edwin Land debuted Polaroid's Land Camera, an instant camera that revolutionized the way that people understood and used photography. Since it's introduction, Polaroid has become a cultural touchstone for an entire generation of artists and enthusiasts, with a new generation of photospammers adopting the analog format as their common digital language.

Instant: The Story of Polaroid is an upcoming book tracing the rise and fall of Polaroid. As the author, New York magazine editor Christopher Bonanos, tells it:

INSTANT is a business story, about what happens when a company loses its innovative spark. It is a fine-arts story, showcasing the amazing things people did with Polaroid film. It is a technology story, of a company that created and maintained a niche all its own for 60 years. And it is a pop-culture history, of a friendly product that millions of people absolutely adored. I like to think that it also tells a larger story, about the rise and fall of American invention and manufacturing.

A prolific inventor and restless visionary, Land's unique approach to innovation is intimately bound with the success of Polaroid and his unique leadership style deeply influenced Steve Jobs. Bonanos sees Polaroid as the Apple of its day, an innovation-driven company that disrupted it's industry by inventing and introducing products no one anticipated.

Princeton Architectural Press released this great "Book Trailer" in anticipation of the book's release in October.

Instant: The Story of Polaroid