Objects I Use: Japanese Train Pass Holder as a Wallet Substitute 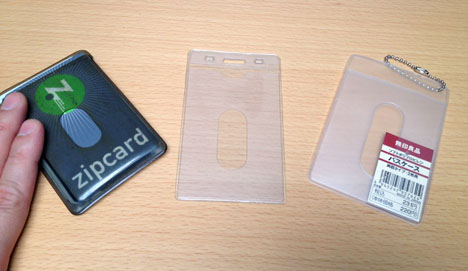 As industrial designers, we're probably pickier than most about the objects we own. We become conscious of badly-placed buttons, poor ergonomics and shoddy construction in ways the average consumer may not. In this series I'll look at the specific objects I choose to use most often, and examine them as if they were the subject of a design research project.

First up, my not-a-wallet wallet, which is actually a Japanese train pass holder. 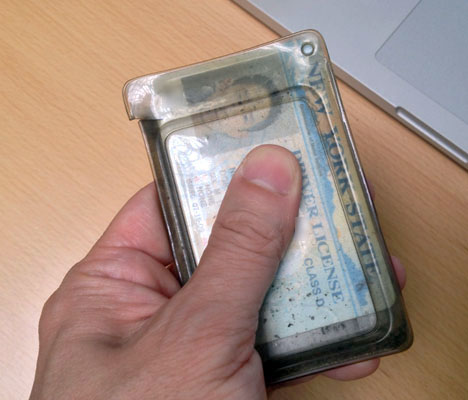 Purpose of Object: Carry credit cards and driver's license only. Cash and receipts go in my pockets, which get emptied every night to file the latter.

Why did you choose this object over competing objects? 1) It's thin. It had to be not bulky, yet carry my five EDC cards (Driver's license, banking card, two credit cards and my ZipCar pass). I hate that back pocket wallet bulge and don't know how people comfortably drive cars and sit on the subway like that. 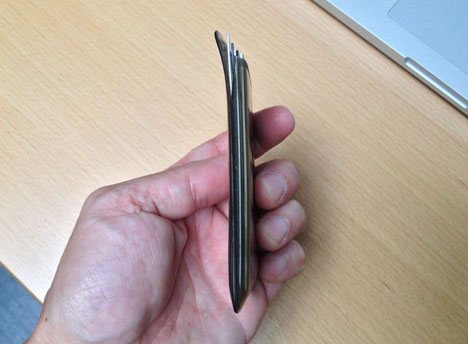 2) It's fast to use. It had to allow me to quickly remove and re-insert a card. As an impatient New Yorker I can't stand being that guy that holds up the line. 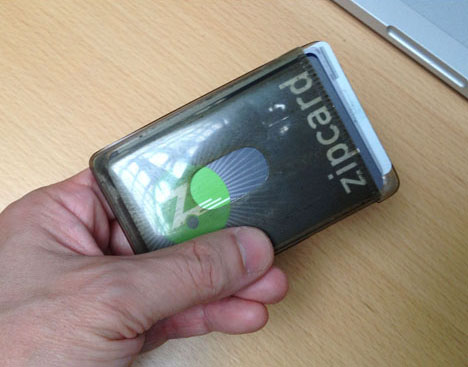 Story behind this object: I bought my first while living in Japan in 1998 to hold my train pass. Everyone I knew in Tokyo used them. The trains in Japan are as efficient as the passengers; the design of the pass holder allows you to quickly slide your monthly train pass out to insert into the turnstile, which opens to admit you while spitting your pass back out at the top, where you retrieve it and slide it back into the holder. Everyone did this smoothly.

Tokyo train stations are unbelievably crowded—it's one of the most population-dense cities in the world—but the crowds flow well and efficiently. I truly believe that if everyone in Tokyo carried their train pass in a flip-out wallet, the citywide transit times would slow down.

I didn't carry my U.S. driver's license or credit cards while living in Japan, as I had no use for the former and believe it or not, it wasn't common to use credit cards in 1990s Japan. Everyone used cash. But upon returning to the 'States, I found the train pass holder would perfectly fit the few credit cards I needed to carry, and was a lot less bulky than a wallet. I've been using it ever since, occasionally replacing them as they wear out. On return trips to Japan I've bought a stack of the cheap things. 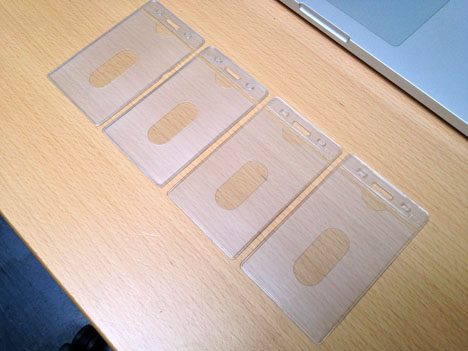 Stateside, Muji sells something similar (more on that below).Construction: It's made from thin, flexible, transparent plastic. I own two variants: Type 1 (below at left), purchased at a Japanese train station, has a single "compartment" and a racetrack-shaped cutout that allows you to slide the card out with your thumb. I've found it will stretch to hold four cards.

The Muji variant (below at right) has a center divider, providing a "compartment" on either side. Accordingly it has the racetrack cutouts on either side. I like this design a little better as it allows me to keep my driver's license in a dedicated compartment, separate from the credit cards, which makes it slightly easier/quicker to remove at airport lines and such. I've found it will stretch to hold five cards. 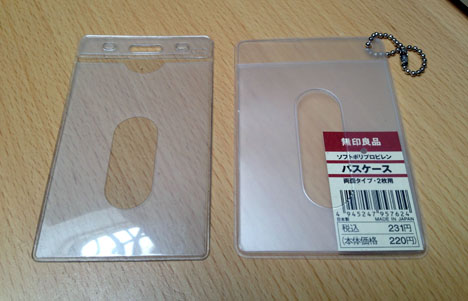 Manufacturer: Unknown for Type 1, but it has "BNC" stamped on it. Type 2 is from Muji.

How does wear affect the object? Both types, when brand new, are completely flat. Over time they stretch and conform to the size of your card stack (4-5 max) and it becomes a little easier to slide them out. But the plastic never stretches so far that the cards can fall out, as long as the stack is the same height as what you started with. Also, over time the plastic becomes brittle and cracks at the seam. 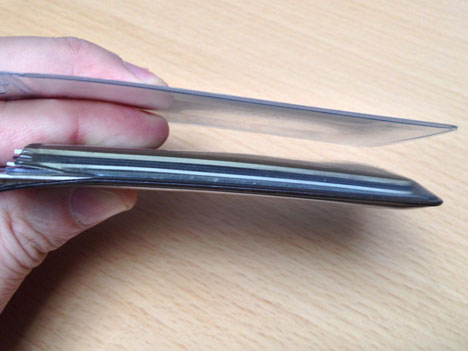 Actual usage. What's good about it? It's thin and fast. At a bar, or while making a store purchase where ID is required, I can simply hand the bouncer/clerk the entire thing with my driver's license facing up, since it's transparent. Only a minority of the time will they demand I actually remove the license (unlike airports, which demand removal 100% of the time).

What's bad about it? 1) Over time the plastic becomes brittle and cracks near the top. This makes it too loose to securely hold cards. There is no convenient way I know of to repair it and it must be replaced entirely. 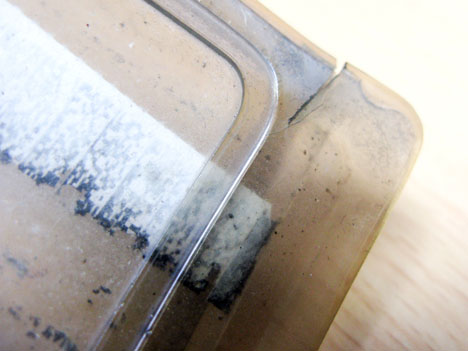 2) It gets dirty, as dust and such migrates to the inside, where it is impossible to clean. Doesn't really bother me but it looks kind of gross. 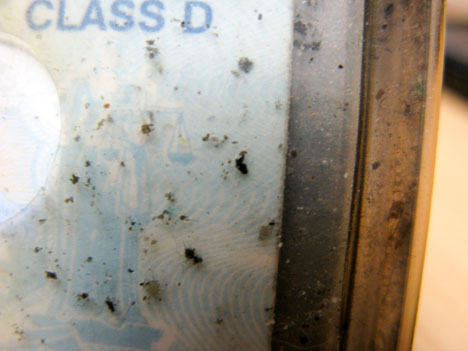 3) In hot weather, my driver's license bar-code-thingy kind of melted into the wallet's interior surface. 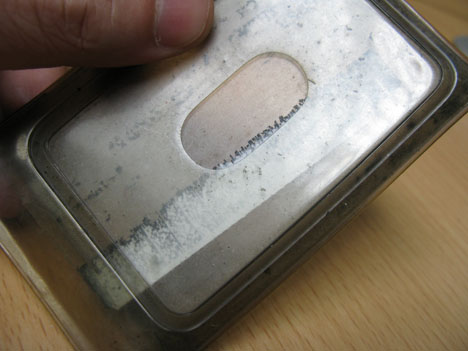 How would you improve this object? If it could be made more durable without sacrificing thinness or transparency, I'd do that. Otherwise, at their inexpensive cost I'm happy to throw them into the recycling bin every 4-5 years.

Will you continue to use this object? Until credit cards and ID migrate into my phone, I'll stick with this solution.

Readers, do you have any off-the-beaten-path objects that you use all the time? If you do, and are willing to take some shots of it and answer some questions, please e-mail a brief description to rain(at)core77[dot]com with the subject line "OIU."

Objects I Use: Japanese Train Pass Holder as a Wallet Substitute