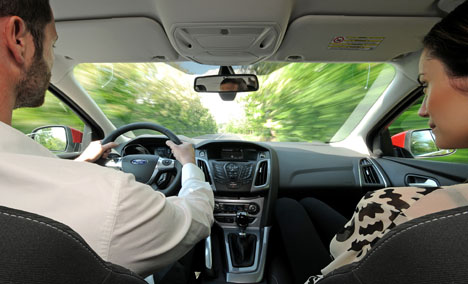 Racing towards a greener future?

Racing towards a greener future?

Forest product company Weyerhaeuser is one of the largest in the world, managing over 20 million acres of woodlands with sustainable practices (like planting more than they're harvesting). In a promising trend, Ford has been collaborating with Weyerhaeuser to "prove out" a cellulose-based material that can replace plastic in their interiors. The idea is to use Weyerhaeuser's sustainability know-how to responsibily harvest wood—or waste byproducts, like chips—to create materials without the need for petroleum. "Specifically," says a Ford rep, "replacing fiberglass, minerals and/or petroleum with a natural, plant-based material can sequester CO2 and ultimately lead to a smaller carbon footprint, among other benefits."

Ford has been dipping their foot in the alternative materials pool for some time; earlier we told you about their soybean, denim and bottle-based materials, and the collaboration with Weyerhaeuser is three years old. An announcement today reveals some of the results of that research:

[We've] found that Weyerhaeuser's cellulose-based plastic composite materials meet [our] stringent requirements for stiffness, durability and temperature resistance. Further, components weigh about 10 percent less and can be produced 20 to 40 percent faster and with less energy when made with cellulose-based materials compared with fiberglass-based materials. These weight and process savings can enable equivalent or reduced component costs.

...Several prototype vehicle components were created from the cellulose-based material and put through a battery of tests by a team led by Dr. Ellen Lee, Ford's plastic research technical expert. "We found that working collaboratively at an early stage has accelerated the development of a material that has a high thermal stability, doesn't discolor and doesn't have an odor," said Lee. "That's important because it opens the door for use of the material in a wide range of applications that could eventually add up to significant environmental benefits across our product line."

...Prototype armrests were tested as potential components that could feature the cellulose-based material. Not only can the cellulose material be used in interior applications, but the high level of performance provided by the cellulose fibers also makes it a good candidate for exterior and under-the-hood applications as well.

"Cellulose fiber is a great renewable resource that already has established infrastructure around the world, making it an ideal material for Ford's global products," said Lee.

Ford has already demonstrated their commitment to greener materials by switching over to soybean-based cushions in all of their North American vehicles, which has resulted in an estimated savings of five million pounds of petroleum. In terms of global consumption that's just a drop in the bucket, but imagine if every carmaker worldwide were to follow suit.