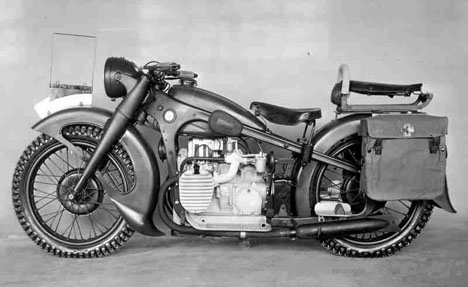 Harley-Davidson had been building motorcycles since 1906. BMW got a much later start, around 1921; but by the time World War II rolled around, BMW's design & engineering was already world-class.

In the 1930s BMW had mastered the emerging production method of electric arc welding, and were able to create incredibly strong joints. This practice was borne of necessity; sidecars were popular in Germany, perhaps more popular than in the 'States, where Americans aspired to ride around in automobiles. Sidecars placed a lot of stress on a motorcycle frame. But in thrifty Germany, with one passenger in the sidecar and another behind the driver, a sidecar-equipped motorcycle was an economical way to transport three people. BMW made their frames strong enough to handle that load. 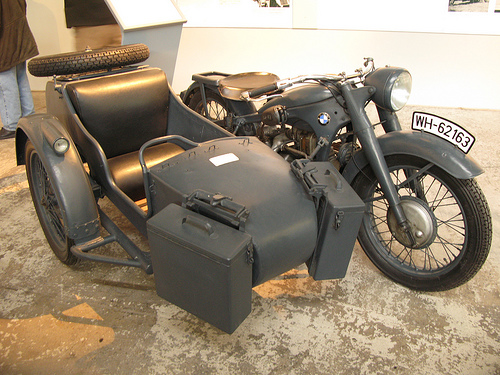 Another impressive feat of design and engineering was BMW's front forks. For comparison's sake, look at the top of the front fork on the Harley-Davidson WLA we discussed in the last entry: 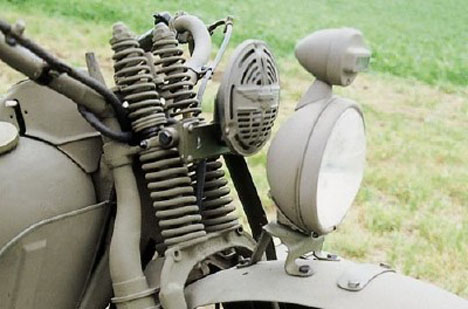 See how the design requires the shocks be exposed to the elements, sticking out of the top like that? In contrast, BMW perfected telescoping forks, which had the shocks on the inside: 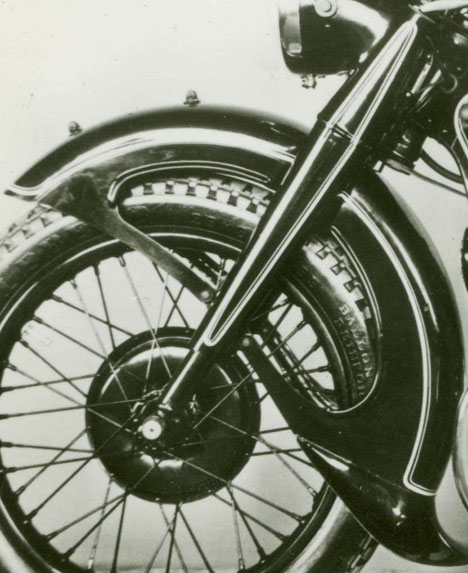 If we compare the forks of BMW's R12 side-by-side with the Harley WLA, the Harley looks primitive in comparison. 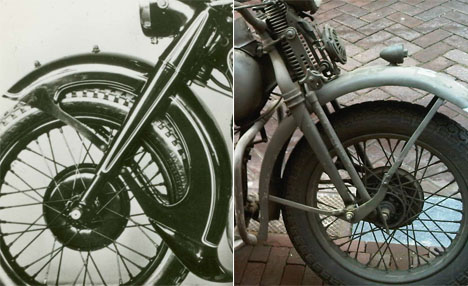 It is true that the R12 mechanic would have to remove an additional housing to access the shocks for replacement or repair, but that was presumably a worthwhile trade-off for keeping sand, snow and ice out of the springs. And the bike had a reputation for being easy to work on; Georgia-based professional motorcycle restorer John Landstrom calls the R12 "probably the easiest to work on and most reliable of the pre-war BMWs...[it] has a very simple, basic layout that was designed for the military so they could be fixed in the field."In the video below, Landstrom discusses the design features of the R12, mostly from 3:35 to 6:15. You can also see that the Germans were able to add some offensive capabilities to the sidecar by mounting a machinegun on it.

Sometime around 1941, BMW began producing an improved motorcycle at the German army's request. Their resultant R75 had a permanently-attached sidecar whose wheel was connected, via axle, to the motorcycle's rear wheel. The R75 thus effectively had two-wheel drive, which greatly improved the motorcycle's handling in adverse conditions. To simplify inventory and maintenance, all three wheels were designed to be interchangeable, and a spare was attached to the rear of each sidecar. 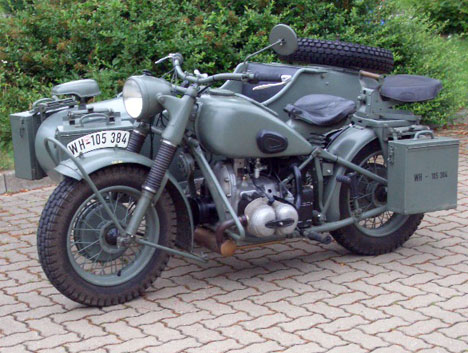 As you can see in the photo below, BMW engineers also updated the telescoping fork with an accordion-like rubber housing; they found the elastic material made a better seal to keep the sand out. 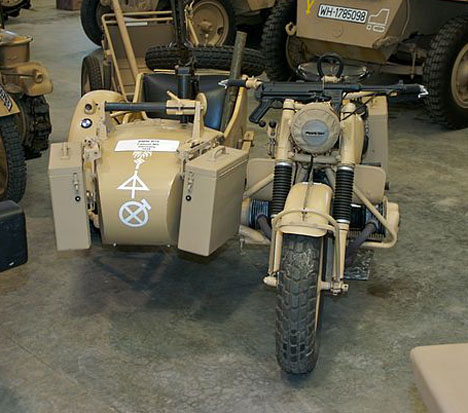 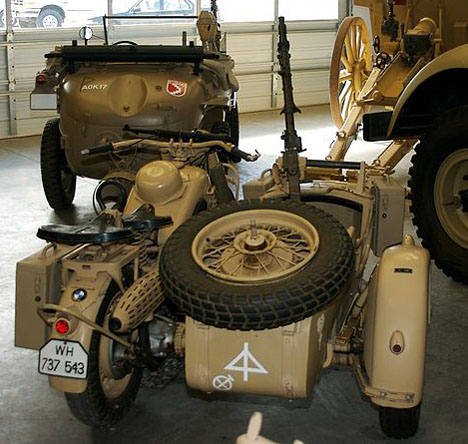 Loaded up with two Jerrycans on the sidecar, one on the bike's rear, an extra seat behind the driver and a freaking machinegun, the R75 made for a formidable and utilitarian vehicle capable of carrying three.

Both the R12 and the R75—and indeed, any motorcycle made by BMW until 1994—also incorporated another clever mechanical trick that Harley-Davidson had not been able to pull off: shaft drive. I'm not talking about the sidecar; I mean the rear wheel of the motorcycle was driven by a rotating shaft connected to a universal joint. In contrast, Harley's SLA, like most other motorcycles of the era, was chain-driven. As both the U.S. and Germany military would discover in the North African campaign, BMW's enclosed shaft was superior, in sandy conditions, to an exposed chain that grit could get inside of.

I should point out that in the 1930s and '40s, to an American engineer, shaft-drive and telescoping forks were something like the concept of laser pistols today; we can envision how they should work in theory, but we can't yet figure out how to make them. BMW had figured it out, and their advanced design and engineering was thus providing the German military with a material advantage.

However, as with the tale of the Jerrycan, at some point Allied troops captured a German R12 or R75 and sent it back home to be studied. Once the U.S. engineers had ripped the bike apart, converted the metric to Standard and reverse-engineered the manufacturing technology, Harley-Davidson was then tasked with producing a similar shaft-driven design. The results of their efforts, the Harley-Davidson XA, are below:

As it worked out, just over 1,000 XA models were produced—and they never got to see the North African sands for which they were designed. Military bureaucracy, combined with an increasing Army reliance on jeeps, meant that the relatively few XAs produced were wastefully relegated to base duty on U.S. soil. Today the XA is a collector's item. 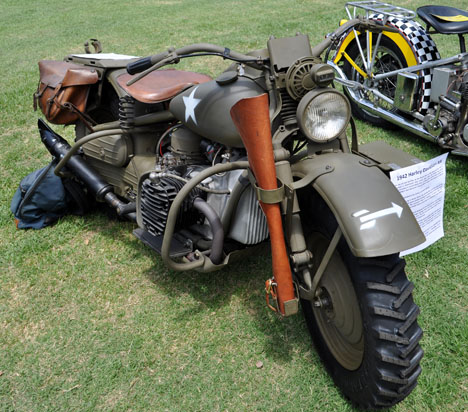 Did the XA getting the AX sound the death knell for military motorcycles? Not quite. Stay tuned.