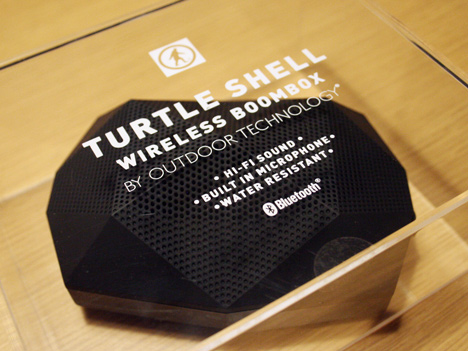 My other life as a recreational cyclist often influences the occasional product reviews that I write, whether the product is actually a bike accessory or not. Outdoor Technology's Turtle Shell is somewhere in between: the LA-based company offers an optional bike mount for the wireless speaker, which is designed expressly for outdoor and urban settings. Complementary usage scenarios notwithstanding, I found it more impressive as a portable speaker as opposed to a bike accessory, handsome and entirely practical in a variety of settings except when mounted to my handlebars. 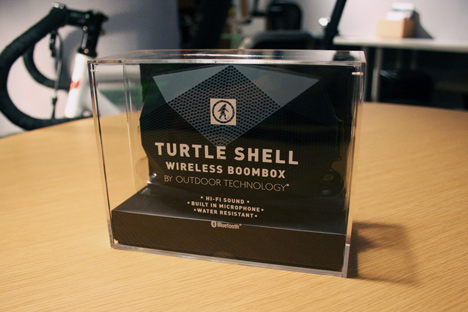 The thoughtfully designed packaging of the Turtle Shell promises premium product within: the acrylic box looks fit for an Apple store and is easily repurposed for all variety of knick-knack and tchotchke. As per the description on the Kickstarter page, it comes with a USB charging cable and a wall adapter, as well as a 3.5mm audio cable for non-Bluetooth audio sources, plus a carrying pouch that's perfect for the speaker but doesn't quite fit all of the accessories. 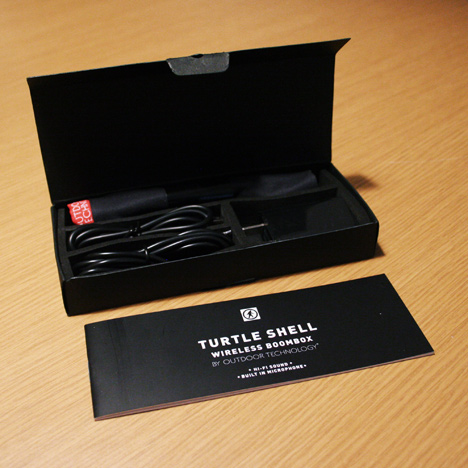 It's not quite usable out-of-the-box: the quickstart guide advises a full charge prior to use. Charge time comes in at a completely reasonable 2.5–3 hours for up to eight hours of music playback; it's obviously too soon to tell how the battery life holds up over time, but I found that I was able to use the Turtle Shell on and off for a couple days at a time without recharging it. In fact, it never completely ran out of juice on my watch, and I assume that the indicator light, which blinks red when charging, does the same when the battery is low. 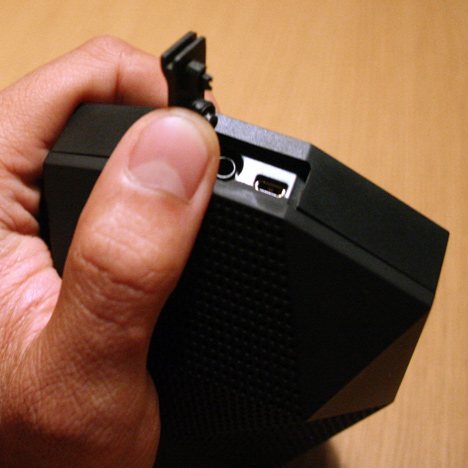 The controls—three buttons and a backlit on/off switch—are located on the outer edge of the device, as are the USB and line-in ports (neatly concealed with a protective flap). I happen to like the old-fashioned jog dial myself, but it turns out that the buttons are multifunctional (especially in 'Talk' mode, below), allowing for both volume control and previous/next track function. The interface isn't quite intuitive—the red/blue indicator and loud-ish beep can be a bit arcane—but all that you really need to know is that holding down the center button activates 'pairing mode' for new devices.

As for the Turtle Shell itself, it looks rugged and feels durable (they've posted a drop test); it stood up to a perfunctory water test, so I'll take Outdoor Technology at their word that it meets the "IPX-5 dust and waterproof standard." 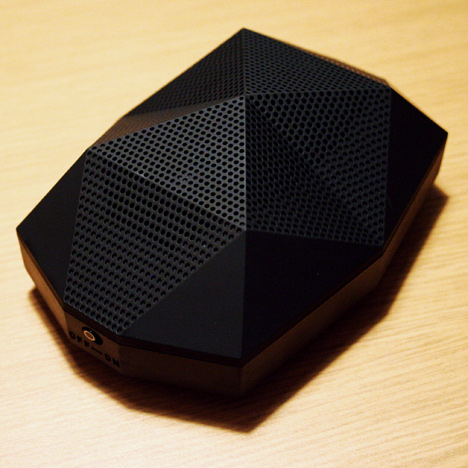 There's just a touch of Jambox DNA, but the form factor is at once minimal and unique, perhaps just slightly overdesigned albeit to winsome effect.

A pair of drivers is partly visible through the perforations of the triangular facets, but I suspect that the 'grate' on the bottom of the Turtle Shell does more for the sound quality than the distinctly articulated 'shell.' The bass is substantial for such a small device, which emits tabletop vibrations at higher volumes, and the speaker easily fills a small-to-medium sized space, but you'd be hard pressed to get a complaint from a neighbor. (Similarly, it's sufficiently loud for public settings—parks, beaches, etc.) 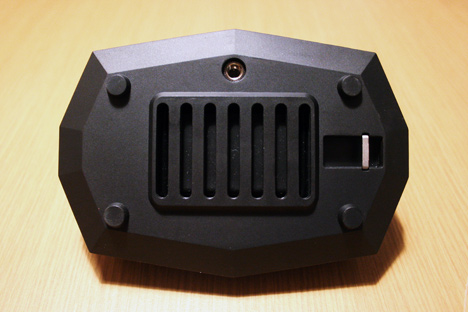 I found myself using the Turtle Shell in both domestic and social settings immediately and frequently: the speaker proved to be an excellent companion both in the kitchen and at a friend's dinner party (for which I'd been cooking). Citydwellers need not worry about its range: neither of these environments demanded anything close to the 33-foot range of the portable boombox.

Furthermore, I'm looking forward to traveling with the Turtle Shell, as it's easily superior to the generic iPod dock alarm clocks that are increasingly a fixture in hotel rooms. And though it's a tad heavy for everyday carry, its size and shape—it comes in at a little bigger than a hamburger bun—strike a perfect balance between portability and functionality, liberated from wires and docks. 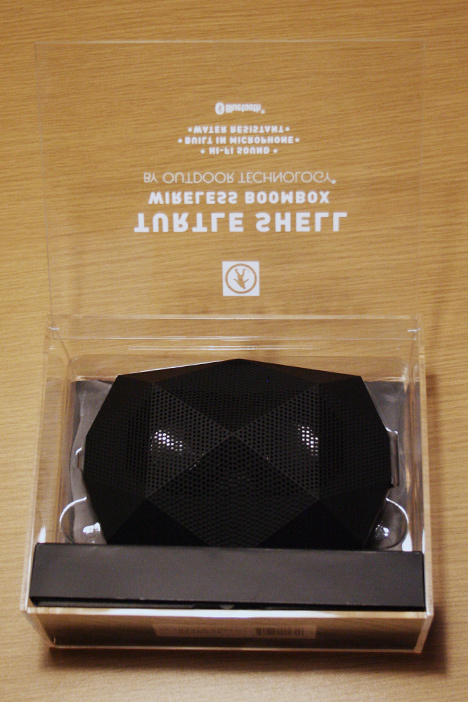 Still, the connection wasn't quite seamless: at one point, when I was attempting to switch from iPhone to MacBook, my laptop froze when I tried to connect via Bluetooth. I'm fairly certain that this was an OS X fluke; nevertheless, I've been more diligent about disconnecting other sources when swapping between them. (Also, if the audio comes through like AM radio, check that your Sound Preferences are set to Stereo, as opposed to the inferior Mono channel.)

Conversely, I'd never used a Bluetooth speaker before, so it hadn't occurred to me that the device is essentially a Bluetooth headset. Not only does the Turtle Shell have a built-in microphone, but the controls have basic phone functionality (short of dialing) as well. I made a call to test the outboard speakerphone features, but I'd be curious to use it for, say, a conference call. 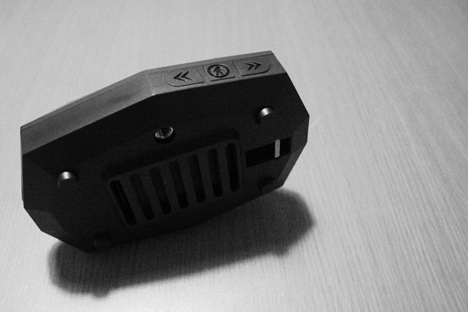 If the call functionality was a pleasant surprise, I'll admit that I was skeptical about the Turtle Claw bike mount as soon as I unboxed it. I should note I'm pretty particular when it comes to my bike: since I use almost every single hand position on my drop bars, mostly dead center for city riding, I usually strap my headlight to my headset spacers and I'd do without a handbrake if not for the unpredictability of NYC traffic. In short, I tend to prefer accessories that I don't notice when I'm riding (such as this and this). 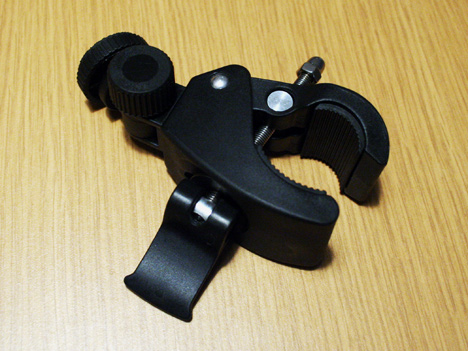 Suffice it to say that the bulky Turtle Claw didn't meet my exacting standards: both the clamp and tripod mount are fairly huge—what good is one-size-fits-all if it's too big to begin with?—ruggedized at the expense of the thoughtful design that went into the speaker itself. Not only does the mount stick out at upwards of two inches from the contact point, the threaded eye of the Turtle Shell is off center, so it works best when the it's perpendicular to the Claw. I'll grant that it can be mounted on almost any tube of a bike (it even maintains a shaky grip on oversized aero tubes)—in fact, I spent half an hour testing out dozens of positions and angles for the thing—but the awkward angles of the hinge effectively doubles the volume of the boxy speaker. Similarly, the quick-release style locking mechanism is a nice touch, but protrudes on either side of the Claw. 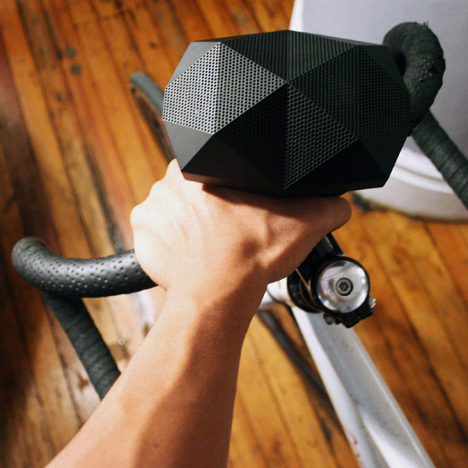 I found that the only remotely discreet place I could clamp the Turtle Shell—without bumping into it with my hands or knees—was on my seatpost, where a saddle bag might go, facing backwards. A public service for anyone riding behind me, perhaps, but far from ideal. 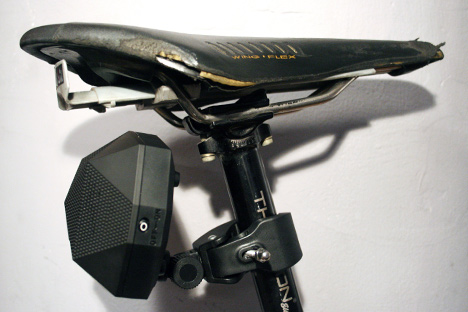 A smaller, fitted clamp is an obvious solution—many clamp-on accessories err on the big side and include shims—but it also occurred to me that the Turtle Shell happens to be about as wide as a water bottle. Thus, another possible solution might be a slide-on mounting system in place of a water bottle cage. And even though the Turtle Shell+Claw looks and feels out of place on a pared-down track bike, it's probably better suited for a BMX or beach cruiser. 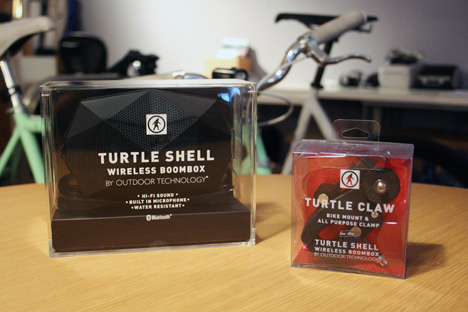 Of course, the shortcomings of the Claw don't detract from the merits of the Shell in the least. It's a remarkably versatile portable speaker and it doesn't hurt that the Turtle Shell finds a kindred spirit in, say, Scott Wilson's "TAKTIK" iPhone case. It would be hard not to oversell the Turtle Shell, given its versatility: it's perfect both at home and abroad, a travel accessory par excellence, and I'm sure it's as good as any bike speaker out there—frankly, I'm probably just not the type to trick out my bike with a mini boombox. The fact that the Claw is a separate product might be for the best: the Shell can stand alone as a portable speaker, and perhaps the future holds a slimmed-down mount.

Outdoor Technology's Turtle Shell is available for pre-order through Kickstarter: once the few remaining $99 ones sell out, the price jumps to $125; retail will be $149.95. With $54,000 in the bank (and counting), they've surpassed their $40,000 goal; if they reach $200K within the next seven days, they'll throw in an OT Adapt Bluetooth adapter with every pre-order.