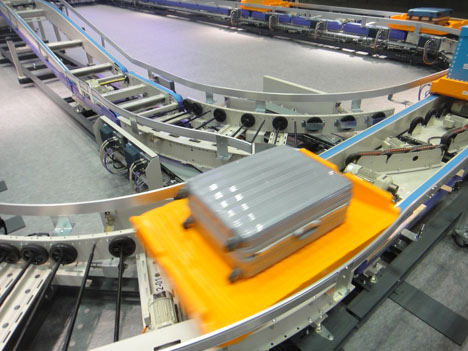 Daifuku Co. is the name of a Japanese "material handling" company that acquired two of its competitors in the past five years. They snapped up the Jervis B. Webb Company, which handled baggage conveyance systems in North American airports, then acquired Logan Teleflex, which does the same in Europe, Asia and the Middle East. By combining all of their technologies, Daifuku has devised the high-speed BTS (Baggage Tray System), which whisks luggage along at 600 meters per minute.

True to the name of the system, each piece of luggage resides in its own tray like a passenger on an amusement park ride. Each tray has its own RFID tag, allowing individual pieces to be quickly sorted "with virtually 100% reliability," the company says. Here it is in action:

Looks awesome, no? But as it turns out, Daifuku isn't leading the way, but playing catch-up: Siemens developed such a system as early as 2006—a year before Daifuku acquired the JWB Co.—and has implemented it in South Korea's Seoul-area Incheon Airport, as well as in Spain's Madrid-Barajas. Here's a video of the Madrid facility, though only our Spanish-speaking readers will be able to follow it:

Whether Siemens or Daifuku wins global leadership of this particular technology, passengers will benefit. By our calculations, the luggage travels too fast for that destructive Samsonite gorilla to get his hands on the things.