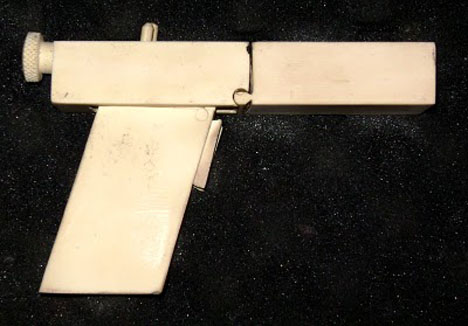 In the 1993 movie In the Line of Fire John Malkovich played Mitch Leary, an ex-CIA assassin hiding out as, get this, a design professor at Art Center in Pasadena. In the film Leary's said to be quite the modelmaker, and the plot has him cobbling together the plastic gun you see above (presumably in Art Center's ID shop?), in order to attack the President. 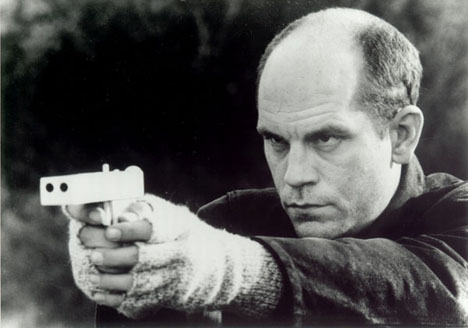 The movie's prop master, Frank Rousseau, designed the dummy gun so that it could actually fire blanks. According to an auction site selling the prop off, "It required 96 hours of machine work and 72 hours of construction to manufacture."

That was in 1993; today, with a good 3D printer, that 96 plus 72 hours of work would be greatly reduced. Which is frightening. And here's the bad news: Cody Wilson, a law student at UT Austin, is on a mission "to disseminate a printable gun design online."

Wilson spearheads the Wiki Weapon movement, which raised $20,000 and used it to lease a Stratasys 3D printer last month. He made no secret of the project's aims, which are to create a 3D-printed pistol capable of getting off a single shot (the plastic ABS used in 3D printing would melt after that). Stratasys was not amused, and after some contentious correspondence, they sent repo men to strip Wilson of their printer, citing U.S. firearms laws.

While Wilson has been questioned by the Bureau of Alcohol, Tobacco and Firearms, the legality of 3D-printing a firearm is currently a legal grey area. But lawmakers had better figure this thing out soon; Wilson is determined to move forward with his project, and the prospect of anyone with a 3D printer being able to secretly manufacture their own deadly weapons, with no practical way for authorities to apply oversight, is a potential powderkeg of trouble.