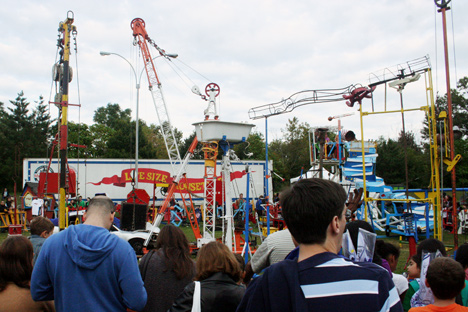 This past weekend was the occasion for MAKE Magazine's annual celebration of DIY and maker culture, Maker Faire, at the New York Hall of Science. Billed as the "Greatest Show (and Tell) on Earth," the family-friendly venue hosted the two-day perennial geek-out for homebrewed or otherwise ad hoc art and design... and, thanks to MakerBot, increasingly for digital fabrication upstarts from near and far. As our friends at Maker Faire note on their Facebook page,The World Maker Faire is over! Official numbers are in and the Faire was a resounding success—thanks to all of you! Over 650 Makers and 55,000 attended. We composted over 2000 pounds of food waste and recycled throughout the event (stats to follow). Mayor Bloomberg declared it "Maker Week" and The New York State Assembly Legislative Commission on Science and Technology issued a citation in support of World Maker Faire, praising the Faire's mission of unlocking the potential of science and technology and putting it in the hands of anyone who has curiosity, creativity, and a desire to make something. I think we can safely say this was an incredible event! Thank you New York!!! 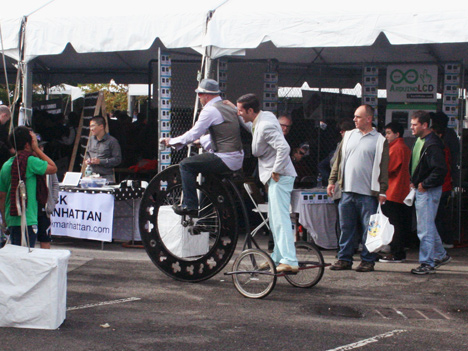 Indeed, the questionable weather didn't seem to affect attendance figures as visitors braved the gray skies to engage the myriad makers, take in performances and presentations, and participate in the hands-on festivities. Considering the largely technical nature of the event, I was surprised to discover that the crowd (at my first Maker Faire) skewed young: grade schoolers interacted with grad schoolers as parents and peers indulged their companions; I couldn't help but smile when I overheard a couple teenage tinkerers debating the merits of the Replicator 2 compared to its predecessor. 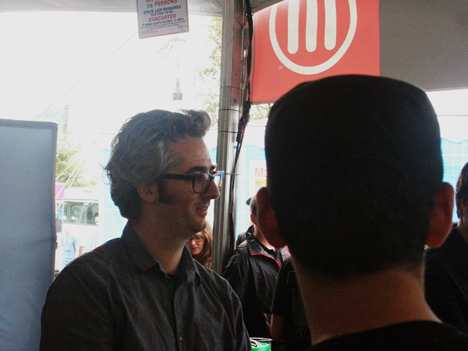 Since I hadn't anticipated the scale of the event—the contained sprawl was difficult to navigate without a game plan—I found the breadth and depth of exhibitors paralyzing: I spent half a day wandering between the tents and booths only to realize that I completely missed the Molecule Synth (perhaps it was a good thing, then, that I had the chance to interview maker Travis Feldman before the Faire). 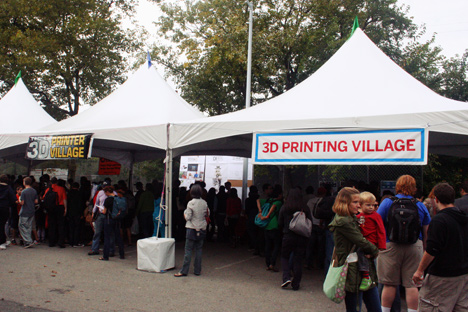 In fact, it almost seems unfair to compile highlights when I realistically only saw about 10% of the event—it's best described as a canonical case of "you had to be there." Still photos scarcely capture the spirit of the Faire: contrary to the ambivalent skies, the atmosphere was characterized by the focused creativity of play as an exploratory process that might eventually benefit society as work. 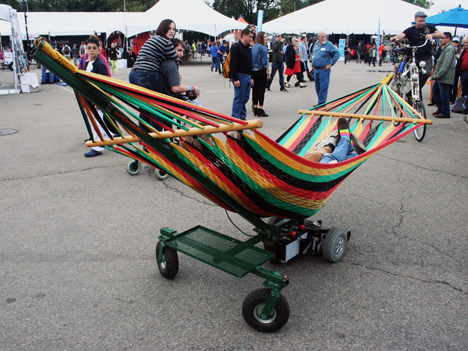 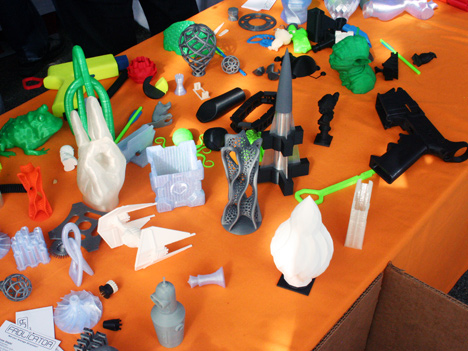 Nevertheless, I noticed that the falling cost of 3D printing is proving to be a double-edged sword: the sheer assortment of entry-level kits, plastic Yodas abound, suggested that the entry-level 3D printer marketplace is nearing saturation—even as Formlabs made publicly debuted their SLA alternative to the more common ABS extruders in the 3D printer tent (a million-dollar idea by the time the Faire opened on Saturday morning). 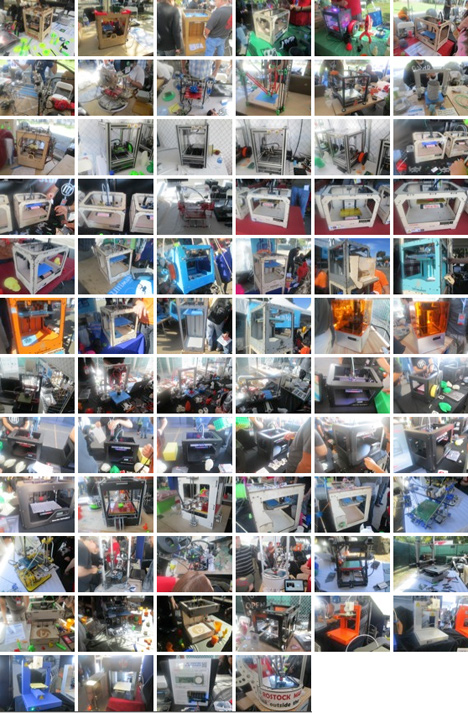 And if I was a bit overwhelmed by the the dizzying array of do-ers and doodads, a friend at MakerBot assured me that Maker Faire Bay Area is invariably several times larger in scale. Good to know for next time. 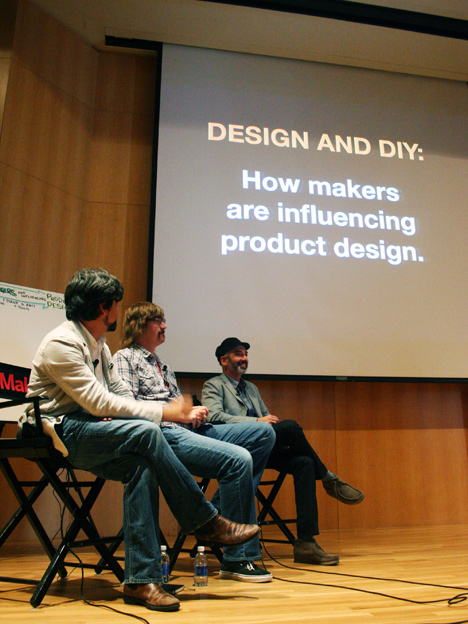 Although I regretted not preparing for my itinerant tour of the Faire grounds, I made a point of catching the panel discussion moderated by our own Editor-in-Chief Allan Chochinov, "Design and DIY: How Makers Are Influencing Product Design." I arrived ten minutes early to find a full house for the preceding chat between Chris Anderson and Bre Pettis, easily the most popular presentation for the Makers in attendance, with fans packed along the aisles (sightlines be damned) of the auditorium. Still, Allan and his fellow panelists—Gadi Amit (New Deal Design), Carla Diana (Smartdesign), Jared Ficklin (frog) and Tad Toulis (Teague)—attracted plenty of practicing and aspiring designers seeking insight from the well-known presenters. As we mentioned yesterday, Toulis unveiled Teague Labs's latest project, the 13:30 3D printed headphones, but it was cleanup batter Ficklin who ended up stealing the show with his kinetic presentation style and, of course, his Kinect hacks (video below). 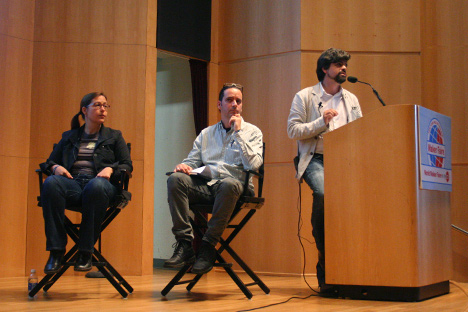 All told, the Maker Faire experience, recapped here in admittedly broad strokes, is perhaps best depicted in contrast to the concurrent New York Art Book Fair. After I spent Saturday afternoon among the Makers in Elmhurst, I ended up stopping by MoMA PS1, which also happens to be in Queens... albeit much closer to Brooklyn than the Faire (both geographically and metaphorically). While the average age of both events probably came in around 30, Book Fair attendees didn't stray from the mean, median or mode: a uniformly well-heeled art crowd mingled among the Borgesian library/labyrinth of zines, editions, prints and monographs. (Unsurprisingly, the graphic design of the book covers largely adhered to Swiss typography, set in the modernist grid, to varying degrees of success.)

One of Jared Ficklin's videos—see more on his YouTube channel.

Which is not to say that the Book Fair was a less worthy event: the renovated schoolhouse somehow dispels art world affectedness, and I've always found the setting to be more precious than ironic (in a good way). Rather, the World Maker Faire and the NY Art Book Fair were equally overstimulating for entirely disparate reasons: the former for its focus on making and doing and the latter for its duly philosophical ambitions. To each to his own.