DIY Digifab via Deadwood, SD: The Story Behind the B9Creator High-Resolution 3D Printer 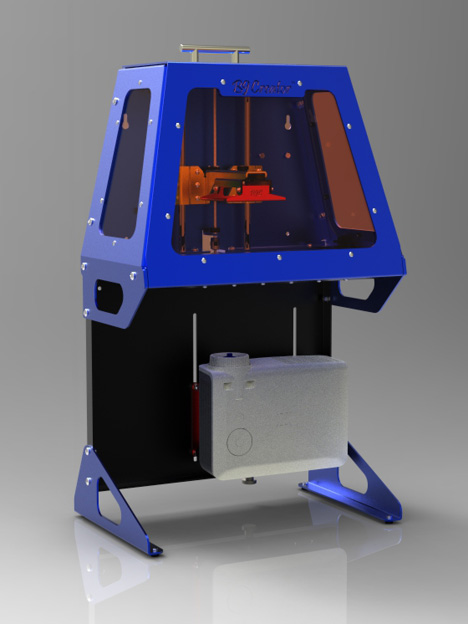 If Mayor Bloomberg declared that last week to be "Maker Week," this might be 3D Printing Week: mainstream media picked up on last weekend's digi-fab extravaganza, and a 3D printing-related news item has stirred up a bit of debate. Meanwhile, MakerBot is going full steam ahead and the potentially game-changing FORM 1 broke the $1.5m mark yesterday... with three weeks to go on Kickstarter.

The Cambridge, MA-based crew behind the latter may have the engineering degrees and the pedigree, but a lone gunman from the you-couldn't-have-made-it-up locale of Deadwood, South Dakota, quietly raised half a mil with his own homebrewed SLA machine earlier this year. Although we missed out on the Kickstarter campaign, we had the chance to catch up with self-taught maker Michael Joyce, the brains behind the B9Creator at Maker Faire this past weekend. 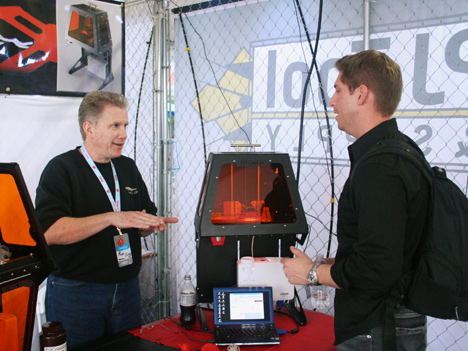 Core77: Let's start with a bit of background...

Mike Joyce: Sure. So I've always been a little bit of a tinkerer as I grew up—I ended up with a math degree out of college, [then I] joined the Air Force, flew as an air force pilot for about 12 years, got out and did a few little things in software. I started making these $25,000 Lost in Space robot replicas and selling those all over the place...

Last fall, I got interested in 3D Printing, mainly in applications for space exploration and things like that. But then I started looking at what was out there and I didn't think that the resolution was real great, I wanted to start doing something with higher resolution.

[Digital Light Processing] caught my attention and that's how I got interested in doing this DLP-based printer.

Do you think your background in math gives you a different take on it than some of the designers who are doing 3D printing?

There's a lot of math in working with 3D objects—rotating them, slicing them, that sort of thing—so that definitely helped. I don't have an engineering degree but I've always built things—I've used CAD software extensively over the past twenty years on my own personal projects. I overengineer things because I'm not an engineer, but I feel like I'm really comfortable with CAD and designing something that I think will work without actually having to have a prototype in my hands.

All of those factors probably helped me quickly come up with this design, and the fact that I've been building those Lost in Space robots gave me a lot of good contacts, as far as my manufacturers, to get things built quickly. So I already had a good relationship with a metal company and an acrylic company—all those U.S. companies that are pretty much mom and pop shops, but they can produce stuff pretty quick if you need them to.

[Unfortunately,] there's really not a lot of manufacturers like that in South Dakota; we've got some folks in the West Coast, down in the Boulder area that supply our components. 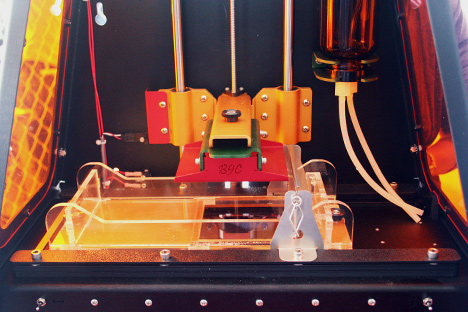 You said you got interested in this starting last fall, and you were able to realize your vision by this spring, when you launched the project on Kickstarter?

Yeah. So by last Christmas, I'd looked at ABS, or extrusion, and DLP and decided I wanted to work on something based on DLP and photosensitive resins. Of course, there was some stuff already going on online, so I looked at that; I built several different prototype versions in January, but then I learned that some things I was trying to do had already been patented, so I didn't want to infringe on anyone's patents.

The actual SLA patent is expired so we're basically doing a form of SLA—we're irradiating a chemical that's sensitive to the radiation to form solid layer, that's SLA. But the details of how you release that part from the cured surface, there are different ways to do that and most of them are patented. So we've come up with a new way to release the part, which we feel is effective and in some ways has advantages over some of the existing mechanisms.So we've got a patent pending on the release portion of our design and we have a design patent for the whole look and feel of the machine. But we do intend to open source everything... except for the patent-pending portion of the hardware, we'll have a non-commercial clause for that part, so we have some way to regain our energies here, and our monies.

But the rest of it, the software, fully open source, non-commercial, is the plan... We think it will be a great platform for people who want to experiment with higher-resolution projectors, if they want to throw a laser under there and try to do laser beam curing instead of projection curing. 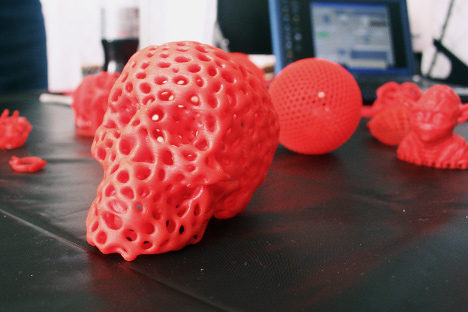 We're also seeing a lot of interest from people who are interested in real high-resolution applications like jewelers. Jewelers will want to make a real complex piece of jewelry, but they need a material that completely disappears without a residue when they cast it and fire it in ceramic. So we're real proud that our resin can be burnt out without any ash residue left behind it, and I think that's a pretty big deal for the jewelry market.

Interesting, I'd never thought about that before...

Yeah, I didn't either at the time, but I kept having jewelers come to me asking, "Well can you burn it out?" And I'm like, "Well, I think so..."

So we actually tested that—we had a jeweler friend who did some tests—my wife's wearing a ring that we printed out, that somebody gave us the file for...

And the resin, did you develop that yourself as well?

No, I have a friend who has a contact and unfortunately, I don't have any control over the resin formulation or anything like that, so I can't open source the resin because I don't own the resin. But I can supply it at a very reasonable price: it's about $99 per kilogram, and that includes shipping within the U.S. So it's about 84 bucks a kilogram, and it takes about 15 bucks to ship it, handle it. We think that's competitive with anything else that's out there...

[It's not a case of] 'you only can use my resin and my machine, and you have to use my cartridge'—these HP-type tactics to make all your money on the resin. Hopefully making the resin available will encourage others to build machines that use our resin as well.

As far as the Kickstarter campaign went, do you have any lessons or advice for creators or backers?

Well, we were really pleased—we thought we had all of our ducks in a line and we were hoping for $50,000 and we got 500-something thousand. It's probably good that we didn't get any more than we did, because in hindsight, we thought we could handle the volume, but we ended up shipping out all of our Kickstarter rewards a couple weeks late—we estimated end of August, it was actually middle of September—we just recently shipped out all 200 kits.

So have people been receiving them?

Yep—if you go online, there's tons of people on our support forum on B9Creator.com, they've been assembling them; they run into problems and help each other out. For the most part, it takes people about four hours on average to assemble the kit. There's no soldering or wire crimping involved...

Does that include the projector?

Yep, the kit includes the projector. Now that Kickstarter's done and we've shipped the rewards, we're taking pre-orders for the next batch of kits. They're $2,495 and that's everything you need except for the computer and the resin—it's the full kit including the projector. 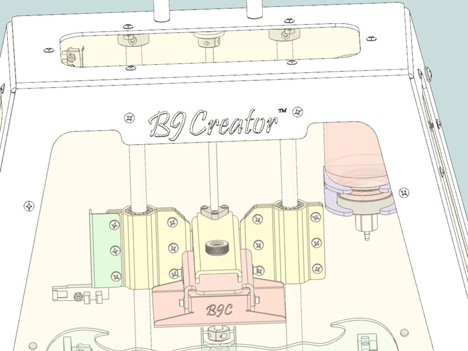 I don't know if you heard about the new policies for hardware projects...

I heard that! If I understood them correctly, you have to show your prototype, you can't show a computer-generated version of it. I did do a lot of renderings, but in addition, I also had the first, bare metal (it wasn't anodized yet) prototype... basically, what I'd rendered, I also showed in my Kickstarter video.

I think it's a good idea on Kickstarter's part, because it's easy to fool people into thinking I'm much further along than I [really] am. I'd always recommend that anyone who's looking to back a project look at the creator and ask yourself can they deliver.

But it's a great mechanism. I couldn't have done it without this kind of mechanism in place.

So you would use Kickstarter again?

I would, I would. I considered using it for the next batch... but I'm hoping to get more into a traditional business model, where we have inventory in stock, and we can just ship direct. 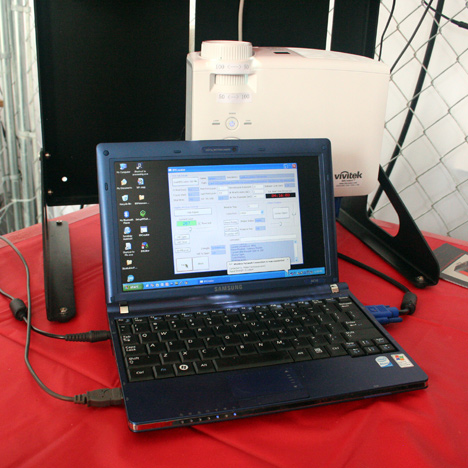 And you're running the whole operation out of your place in South Dakota.

Yep. It sounds like a lot, but really all we do in South Dakota is we source all of the parts from the vendors, we pack it, and then we ship it. It takes space, but there's not a lot of fabrication being done at our place.

What does the future hold for B9Creations?

We're just having fun with it. The idea with open source is we develop a community around it, so if I go off on something else, it's still self-supporting. I want to get it living and breathing and on its own [so I can] pursue something different if I need to or want to...

That seems to be happening already with the 200 we got out there. 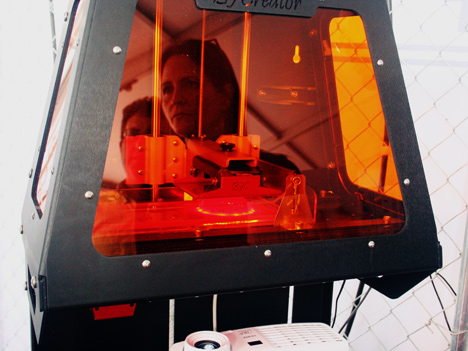