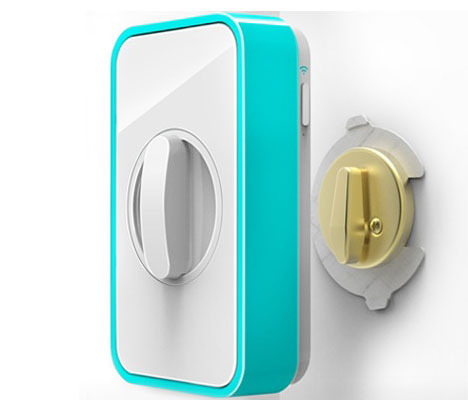 What we find most interesting about the Lockitron keyless entry system is not that it received over $1,000,000 of funding in the last 48 hours, but that it received it by imitating and not using Kickstarter. The Lockitron website looks too much like the Kickstarter page to be a coincidence, yet they neatly sidestepped the organization altogether to become nearly 700% funded at press time, with 28 days left in their pledging period. Now that Kickstarter's banned product renderings, will sidestepping them while using their model become a trend?

As for the Lockitron itself, it's a neat keyless entry system that the user manually installs on a door. It's not compatible with all deadbolts...

...and it may not be for everyone, but nearly 7,000 so far have voted yes with their dollars. Check it out:

It's due to start shipping in March of 2013, and many will be closely watching to see if they can deliver. If they do and the Lockitron is a resounding success, it's likely others may seek to be kickstarted with a lowercase, not capital, "k."