The Decline of the Car? Part 1: Italians Now Buying More Bicycles Than Automobiles 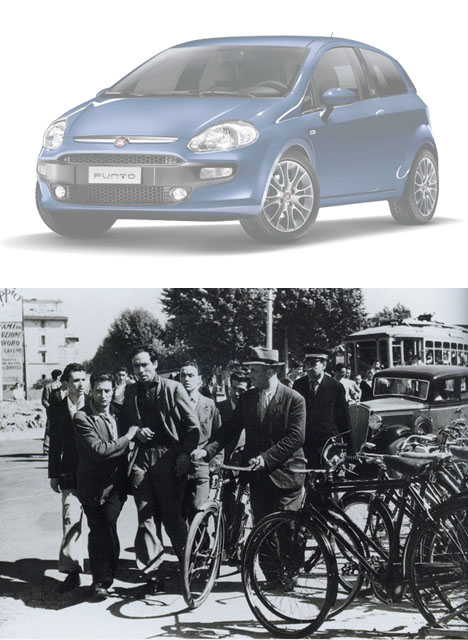 Surprising news: Italy, home of the mighty Ferrari and the sprawling Fiat empire, is now a country where people are buying more bicycles than cars. The numbers are a little too round (and close) not to take with a grain of salt, but according to the Detroit Free Press, last year 1,750,000 cittadini Italiani purchased bicycles, versus 1,748,000 who ponied up for a car. The first figure has not been higher than the second since World War II.

So what's behind the trend? Exciting bicycle commercials? A bold push into green living by the government? Citizens increasingly interested in their health? Sadly, the truth is darker: It's about economics. With Italian unemployment now above 10% and high petrol prices, a people-powered two-wheeler suddenly looks a lot better than a gas-powered four-wheeler. The rise of bicycles and the decline of cars in Italy is not the willful result of environmentalists, but rather, an alarming symptom of a diverging society.

"The middle class ...is basically disappearing," said Gianluca Spina, dean of the business school at Politecnico de Milano in Italy. "It is something really new for this country."

...Fiat's strength is in small to midsize cars for the European market -- precisely the cars that Italy's middle class buys. "For the middle class, there is really no money in their pockets," Spina said.

For all our wishes of a greener future where bicycles play a more important daily role in people's lives than cars, personal poverty is not the way we'd like to see that aim achieved. Is there a different way? Perhaps—stay tuned.

The Decline of the Car? Part 1: Italians Now Buying More Bicycles Than Automobiles