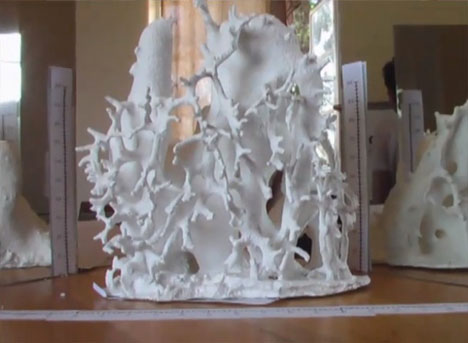 When it comes to casting bugs' nests, looks like Walter Tschinkel's not the only game in town; scientist and SUNY biology professor Scott Turner also produces "endocasts," though he does them of aboveground termite mounds rather than undergound ant colonies, and uses plaster rather than molten aluminum.

The results, which display a similarly alien architecture to Tschinkel's ant hives, give me the heebie-jeebies: 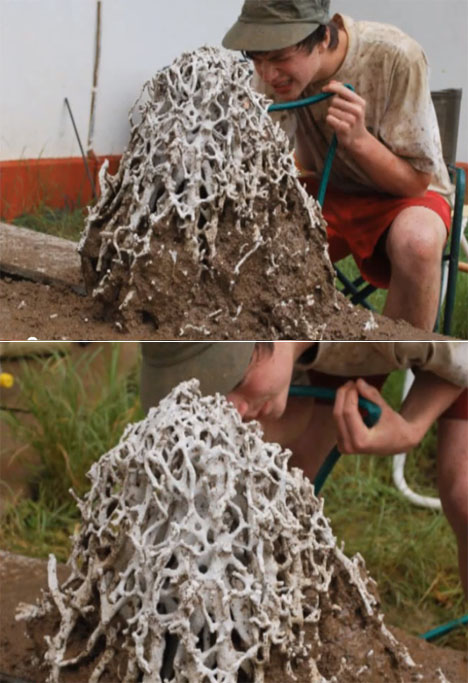 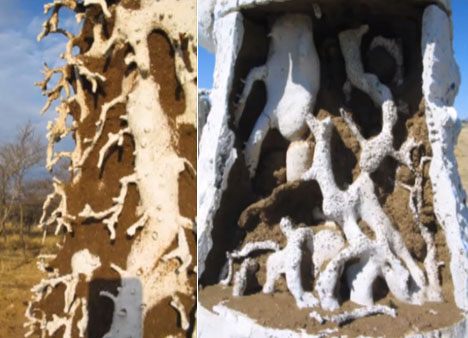 Turner's endocasts take months to complete, as you'll see below, and obviously he's not putting in the time just for fun; he's after specific answers. Writes Turner, who refers to the physiology of social insects as "my current obsession," on his website:

Social insects, specifically termites, cooperate to produce "emergent physiology" at a scale much larger than the individuals in the colony. How do they manage the trick? How is it that swarms of termites "know" to build a structure that functions as an organ of physiology at a scale much larger than themselves? Just how do termite mounds work in the first place? These are questions we have long thought we understood, but in fact understand little.

In this video of Scott's process, be sure to peep the bugged-out (sorry) sequence that runs from 3:34 to 4:26, where they animate the layer-by-layer slicing open of a mound:

While it's cool to see the process in action, I was a little disappointed not to hear the answers to the aforementioned questions posed by Turner. Then again they're probably a little too lengthy to cover in a mere blog entry; he's written an entire book on his findings, entitled The Extended Organism: The Physiology of Animal-Built Structures.