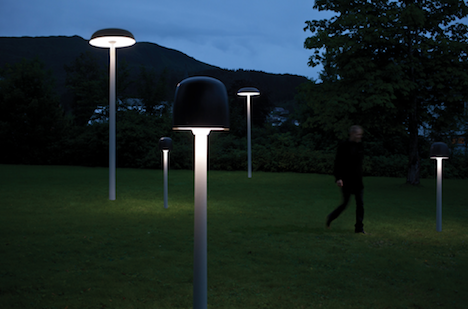 After working with elderly people in a Norwegian village, Birgitta Ralston and Alexandre Bau of Ralston & Bau, wanted to create an outdoor lighting system specifically for Nordic cities, which are situated close to nature and have long, dark nights during wintertime. It was also important to Ralston & Bau to design lighting that wouldn't interfere with "the amazing light of stars and aurora borealis," (otherwise known as the Nordic lights) so they came up with Shroom, a series of light fixtures that are fully lit only when needed. 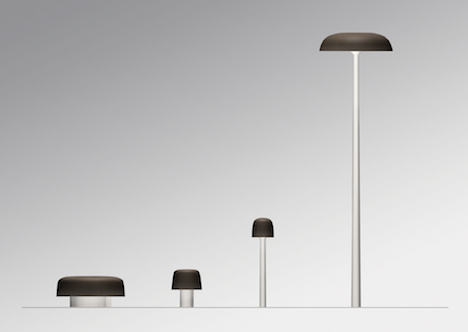 At night the Shrooms maintain a 10% light output, but the when the built-in detection system senses a passerby, the lights smoothly transition to full luminosity, lighting up the path or bus station or park bench. "This is both energy saving and avoids unecessary light pollution."The shade is made from linen fibers, a natural fiber biocomposite material. There are four fixtures in the series, two pole lights and two smaller lights that double as seats. "The result is a small forest of magic Shrooms."