The Stormtroopers of Anarchy? 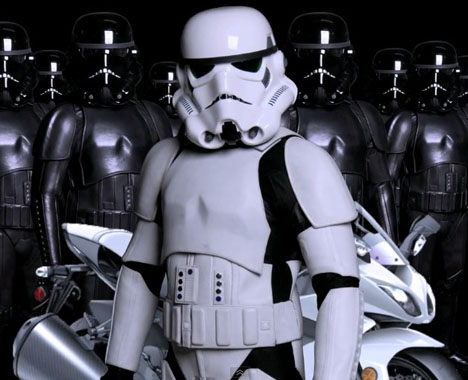 I thought for sure this was a joke, but it appears to be real: A company called UD Replicas is selling a protective motorcycle suit modeled after a Star Wars Stormtrooper's armor. Made from leather molded in forms and some type of unspecified protective plating, "each rounded segment, every chiselled and bevelled edge perfectly replicates the look of the on-screen armor," the company claims.

Folks, I don't doubt that there's some overlap between the motorcycle-riding and Star-Wars-watching subcultures, but isn't this kind of asking for an ass-kicking? Maybe I've been watching too much Sons of Anarchy, but would you not be worried about a gang of thugs pushing each other out of the way in their haste to get to you, eager to win first boasting rights of "I beat the crap out of a Stormtrooper?"

The real rub is that the helmet isn't an actual motorcycle safety helmet. But I can't say what would be more dangerous—riding around with no helmet, or wearing this get-up to Sturgis.

The Stormtroopers of Anarchy?