Ebsen Nielsen's RC-Copter Videography, and What "Drone Goggles" Could Do for You 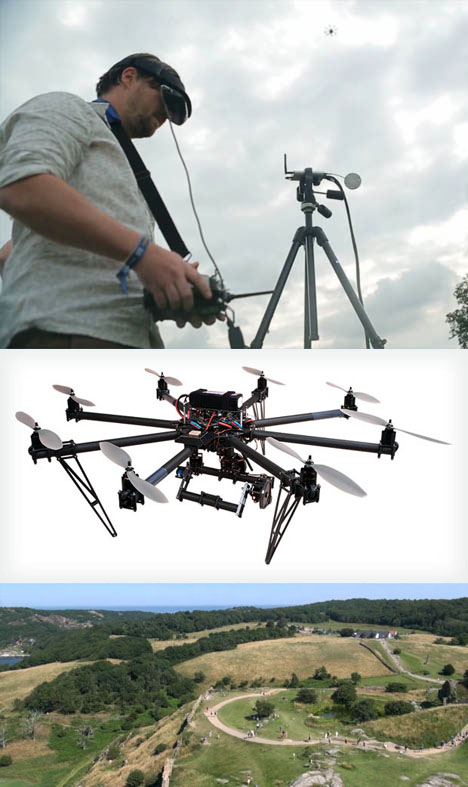 In the years since we first caught wind of Eric Austin, a pioneer of videography via remote control helicopter, the man's business and client list have exploded. The following year we saw a similar pioneer capture footage of the Warsaw riots, earlier this year a third shooter rigged up a camera/airplane, and nowadays a company called Quadrocopter is selling RC whirlybirds ready-to-go.

We're excited to see design advancements in this field, which was virtually nonexistent just a few years ago. Danish shooter Ebsen Nielsen has made the latest advancement: After cobbling together an octo-copter from several different manufacturers' kits, he rigged up a way to send a live feed from the camera to a pair of goggles he wears, enabling him to fly it from a first-person POV.

If realtime video-to-goggles becomes standard kit, that ought to open these helicopter drones up to a whole 'nother level of applications. Imagine being able to inspect your leaky roof, or a building inspector checking out the antenna at the top of a skyscraper, using one of these things. If you could work out the safety/piloting issues, I could even see these used for recreation: I'd pay to see self-controlled POV footage from flying over Manhattan or the Grand Canyon. But where I really want to see these things...is on top of cars. My senior year at design school, one of the projects I worked on (sadly, my crappy sketches are long gone) was a concept for a camera-equipped drone that locks down on your roof while parked, then begins to hover above your vehicle as you drive, remaining low enough to clear overhead obstacles. While the drone's altitude would vary as needed, it would always remain dead-center and would always be recording. The idea was that everyone would have one, with nearby ones all flying at different heights so they wouldn't crash into yours, even if the cars collided. Which was the main point: The thinking was that you'd have overhead recordings of every car accident, allowing investigators to see exactly what happened. The insurance companies would underwrite these drones to offset fraudulent claims.

Other areas I thought the car drone might help would be in traffic jams, by providing the driver a dashboard-monitor view of what the hold-up ahead was, or at least how far the problem stretched. I also thought it'd be neat to parallel park with an overhead gauge of exactly how much room you've got. But I recognize that in today's paranoid society, not everyone wants TiVo-able footage of them driving around....

Ebsen Nielsen's RC-Copter Videography, and What "Drone Goggles" Could Do for You