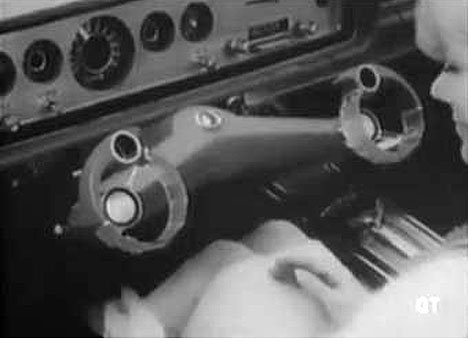 We all know the value of bringing in an outsider to shake things up creatively, just as we know that there are spectacularly talented engineers who are well-capable of doing industrial design, even without any of our training. But here's a reminder that sometimes that combination just goes spectacularly wrong.

Robert J. Rumpf was an aerospace engineer who worked on missiles, and in the 1960s Ford brought him in to work on experimental auto designs. What he came up with was this crazy two-handed "Wrist-Twist" steering system, shown here in what I believe is a 1965 Mercury:

Let's try to ignore the anachronistic sexism of that whole it's-so-easy-even-a-woman-can-use-it thing and look at the actual interface design. Surely this system wasn't designed purely for the benefit of having armrests, so what do you think he was after, a more easy method of ingress and egress? Or was he overcomplicating an incumbent system that worked well for the sake of pure design experimentation? I also can't figure out the logic of having two dials work in concert; do you think each controlled an individual wheel? Mechanically it doesn't seem to make sense.

Whatever the initial goals, the design obviously failed and never saw showroom floors. (Which is not to take anything away from Rumpf; the man worked on nuclear defense and missile technology, and eventually racked up some 22 patents.)