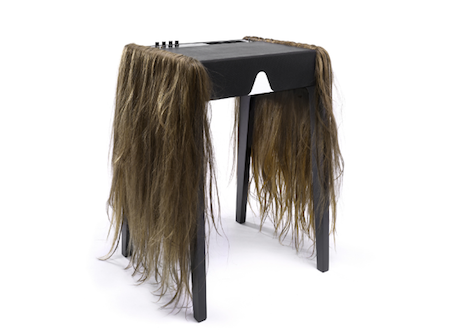 The LD series, available in 100, 120 or 130 watts, is still the first and only high end docking station dedicated to the laptop, as opposed to the iPhone. The USB DAC Hi-Fi sound card is integrated inside the speaker to improve the sound quality of your laptop independently from its sound output, which is projected from six speakers—two medium woofers (13cm), two tweeters with domes (silk 25mm) and two full range rear drivers for the unit's patented Wide Stereo Sound, a system developed by La Boite Concept that improves the range of the surround sound so that a listener positioned at any point in the room gets the full surround sound effect. And whether you want to use the desk to work on or DJ from, the desktop is made from silicon in a range of colors to prevent the speakers' vibrations from shaking the laptop.

Things seem to have gotten a little hairy for the Paris-based design studio with their new limited edition collection designed in the image and likeness of electro-pop musician Sebastien Tellier, whose long locks have been draped on either side of a unit made complete with a silhouette of Tellier's signature sunglasses. According to Claire Marion, La Boite Concept's UK Manager, the idea came to La Boite's designer and co-founder, Guillaume Cagniard, while he was visiting a hair stylist friend who has thousands of hair extensions on hand. He "thought it could be funny to add hair to our LD series legs," Marion said. "From this crazy idea, Sebastien Tellier became the inspiration." 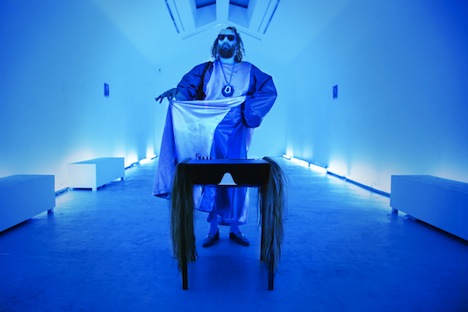 Cagniard took his idea to Tellier's people, who "had such a good laugh looking at the pictures of this hairy sound system project that they said yes immediately." Tellier used the LD to play music at a recent album release party at Galerie Perrotin by connecting it to a "magic piano" playing the album, My God Is Blue. No word yet on what a magic piano is, but perhaps La Boite Concept will come out with one soon. In the meantime you can purchase a hairy LD120 by placing a special order with Cagniard.