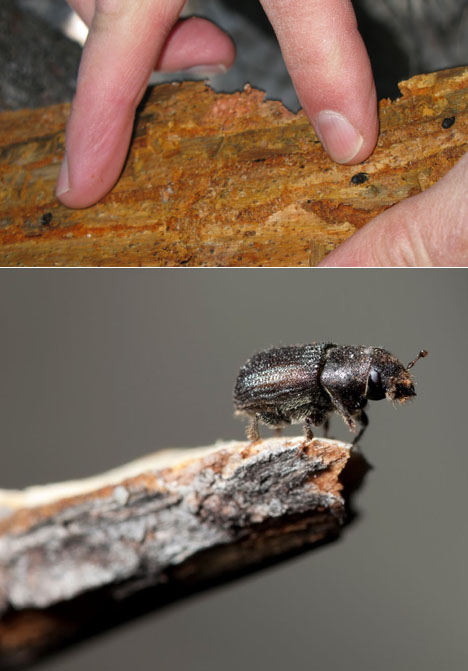 In the early 2000s, tree-heavy Colorado suffered an outbreak of mountain pine beetles, decimating some 70% of the lodgepole pine population. In recent years the infestation spread south as far as Mexico, and north through Wyoming, Montana and Idaho to reach western Canada, where the current outbreak dwarfs the Colorado infestation. Colorado's loss of tree acreage is in the low millions; it's estimated British Columbia will lose some 44 million acres of pine trees. 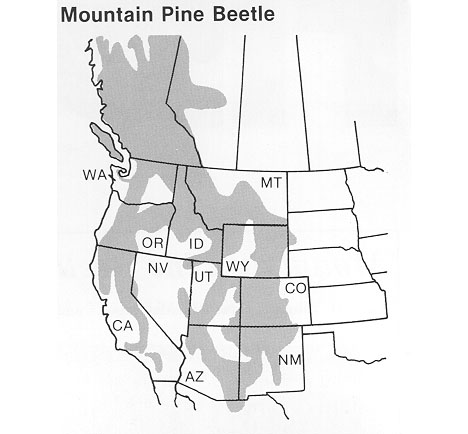 The mountain pine beetle typically lays its eggs under the bark of dead pine trees, and historically the bugs' population was kept in check by the winter cold. But as North America has recently had warmer-than-normal winters, the MP beetle's population has exploded. With not enough dead trees to go around, the beetles start laying their eggs into live trees.

When that happens, the live tree becomes infected with a blue fungus that arrests its internal flow of nutrients. Its pine needles turn red, its bark starts to turn grey, the internal wood takes on a bluish tinge, and the tree dies. Here you can see dead trees from literally miles away: 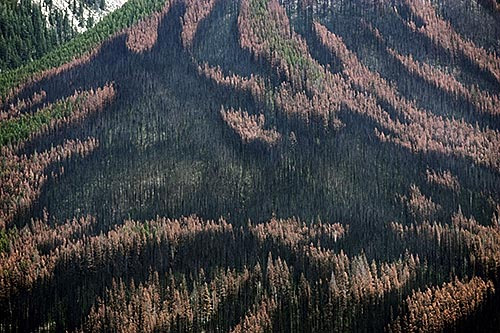 Having huge swaths of prematurely dead trees is bad news. It's a forest fire waiting to happen, and dead trees will release all of that juicy CO2 they've been storing their entire lives. Government forest officials in both the U.S. and Canada have determined the trees must be cut down. 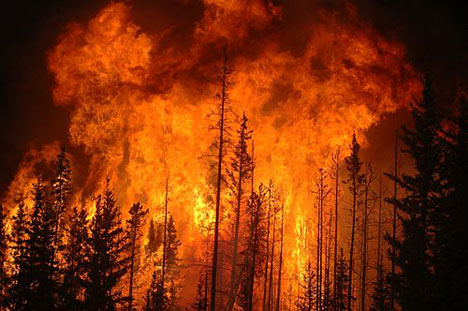 A mandatory influx of millions of logs of surplus wood--sounds great for manufacturers, right? In this day and age of not-enough-wood-to-go-around, you'd think that a huge amount of wood that must be cut down would be a positive. Unfortunately, the problem is getting all that wood. There are significant infrastructure problems. Not all of the afflicted trees are on public or easily-accessed land, and a lack of roads coupled with rising fuel costs make it prohibitively expensive to clear.

Then there's a two-part manufacturing hassle: One, the specific type of pine killed by the beetles—lodgepole—is relatively small-diameter and often cracked by the disease, making it difficult and expensive to mill into useful boards. Two, the U.S. timber industry has been declining for years, with one large sawmill after another shutting down. Today there are only a handful of high-capacity sawmills left. To truck dead trees hundreds of miles to a sawmill that can handle them simply isn't cost-effective, in light of the low manufacturing yields.

"Typically you'll find the material is so low value, doing anything with it beyond a 15-mile radius is problematic," forest scientist Mike Eckhoff told Biomass Magazine. As a result, one "solution" has been to throw the stuff into a wood chipper, and dump the resulting piles into landfill. And unfortunately, that is as affordable as it is shameful.

This disaster notwithstanding, a handful of brave entrepreneurs have been trying to turn the blue pine negative into a positive. Next we'll take a look at what they've been up to.

For more on the Blue Pine Disaster
» A Raw Materials Nightmare, Part 1
» What is Blue Kill Pine Good For?
» What Will the Future Bring for Blue Kill Pine? Canadian Innovation FTW
» How You Can Help As An Individual