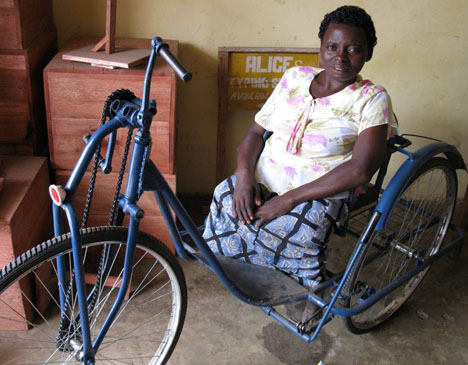 Uganda is home to five million people with disabilities, whether from birth defects, malnutrition, disease or injuries sustained during the violence-wracked internal conflicts. Whatever the cause, Ugandans without the use of their legs have, in the past, been unable to use bicycles. And as Uganda is one of the poorest countries on this Earth, the bicycle is a crucially important method of transportation there. Without it, some cannot earn a living.

Nelson "Kio" Mukiika has a machine shop of sorts in the Kasese district of western Uganda. I say "of sorts" because he does not have access to basic measuring tools. Nevertheless, Mukiika is able to disassemble old bikes and re-weld them together into creations of his own design: Three-wheeled hand-powered bicycles.

At the very top of this entry is a woman named Gatrida sitting in Mukiika's first completed trike. Since then he's produced 50 more, funded by the CanUgan Disability Support Project, which renders material assistance and vocational training to disabled Ugandans. 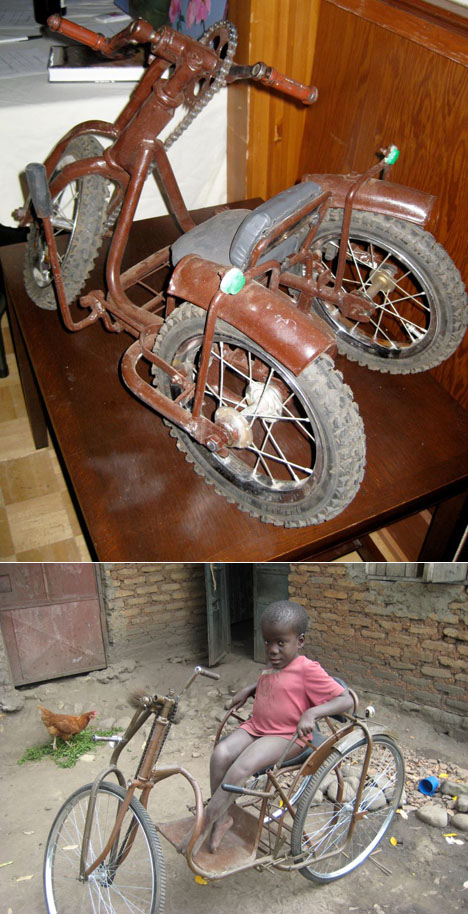 It was through CanUgan that Dean Mellway, Director of Carleton University's READ (Research, Education, Accessbility and Design) initiative, caught wind of a Mukiika's trikes; Mellway then brought it to the attention of a team of fourth-year Industrial Design students at Carleton, and they're now working together with Mukiika in an effort to improve the designs.

One challenge the students face is not being able to use hard measurements, as Mukiika lacks the tools to reproduce them. "He doesn't work with blueprints. He uses his fingers to measure," ID student Andrew Theobald explained to a Canadian newspaper.

Mukiika can produce the trikes for about $170, well out of reach for the average Ugandan. (More than a third of the population live on a little over $1 a day.) The funding is provided by CanUgan. You can volunteer your time, form a support group, or make a donation to the organization here.