Stealing Detroit, One Bannister At a Time 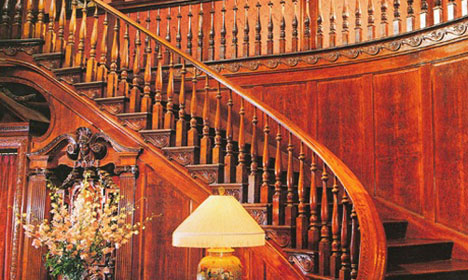 Where some see beauty, others see firewood

Where some see beauty, others see firewood

Up above is the restored staircase at the Caroline Ladd Pratt House, an 1898 neo-Georgian mansion owned by Pratt Institute in Brooklyn. When Core77's founders and myself attended Pratt in the early '90s, the restoration had just been completed; prior to that the house had been abandoned and had fallen into disrepair. The crackheads of the '80s, it was said, had broken up the bannister spindles to use as firewood.

To take someone's painstaking, historical lathework and break it up for something to burn is a shame, but one that Pratt was able to reverse. The city of Detroit, on the other hand, is facing a much larger-scale defacement with no solution in sight.

Here's what's going on there, as uncovered by Detroit-based photographer Robert Monaghan and the website DetroitUrbex.com: Their city is filled with beautiful and abandoned old buildings. Those buildings are filled with ornate, Art Deco wooden carvings around doorways, staircases and the like. And someone is stealing them, as revealed in this surprising series of before/after photos. 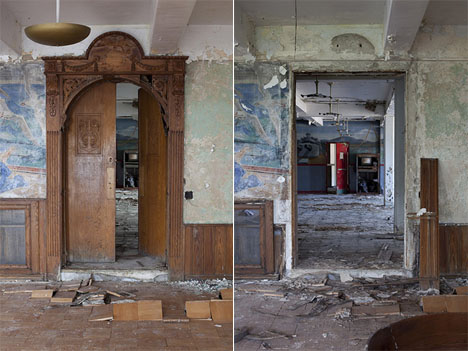 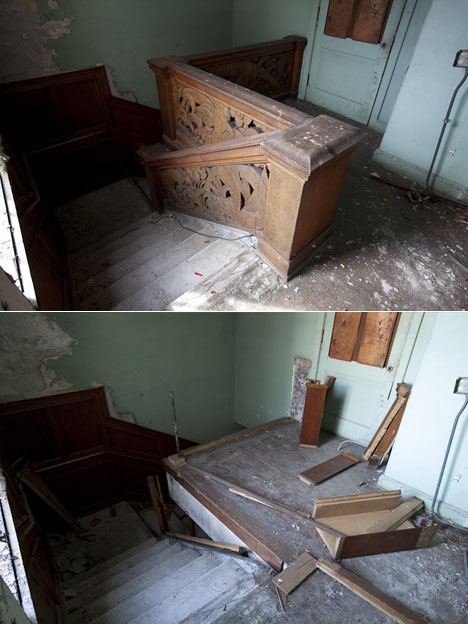 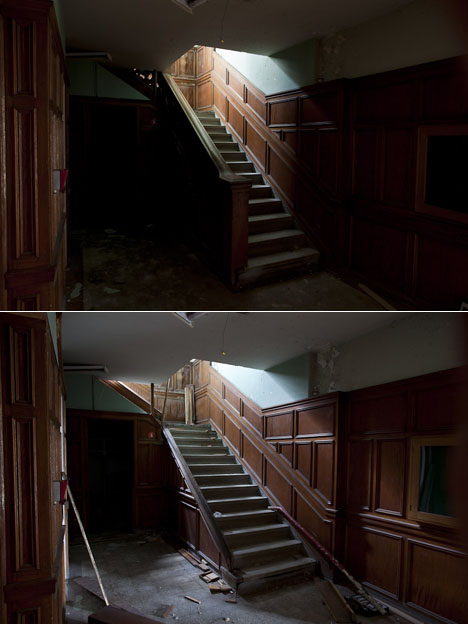 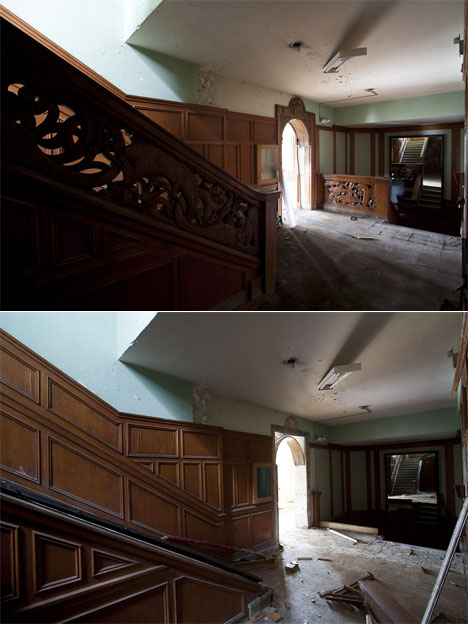 We've all heard of scrappers stripping a building of copper pipes and metal fixtures, as those things are fairly portable and can be easily sold. But this is different in that someone is removing whole doorway frame carvings and entire bannisters. The amount of labor and care required to completely detach and transport such fixtures says it's probably not a couple of meth heads looking for something to burn. So who is taking them? Fraternity pranksters? An Art-Deco-loving vagrant? An off-the-radar historical society willing to flout the law? Or is this merely "urban mining" without the hassle of going through paperwork and the appropriate channels?

DetroitUrbex provides some context on what this type of thievery means:

"The Federal Art Project (FAP) was an agency designed to keep artists working during the Depression by applying their skills to decorate government buildings. Several artists worked in the armory [shown above] from 1936-1941."

Rebecca Binno Savage, Vice President of the Detroit Area Art Deco Society tells us "The wood carvings are by Gustave Hildebrand - he was a Michigan-based artist who was commissioned to work at the Detroit Naval Armory by Captain Thornton Brodhead through the Treasury Department's Fine Arts Program - FAP - as it was called at the time. They have an Art Deco influenced aquatic theme and are unique works of art commissioned for the site.

....And while the loss of a few carved pieces of wood may seem insignificant in comparison, it isn't. These are parts of Detroit's historical heritage. These pieces are irreplaceable, created over 80 years ago by artisans of quality that would be very difficult to match today. They represent a time when the economy got so bad, the government stepped in to support an entire generation of artists with this sort of work, so as not to lose the creative class to the factories or mills. That theme resonates today, and underscores the value of these pieces of work that are lost.

While the willful removal of Hildebrand's work is surprising to see, another section on the DetroitUrbex site is equally eye-opening. They are simple before/after photos of interiors that have been ravaged by weather, time, and sheer vandalism: 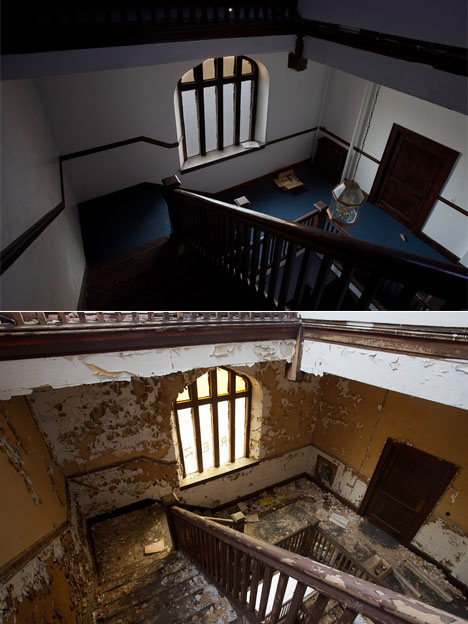 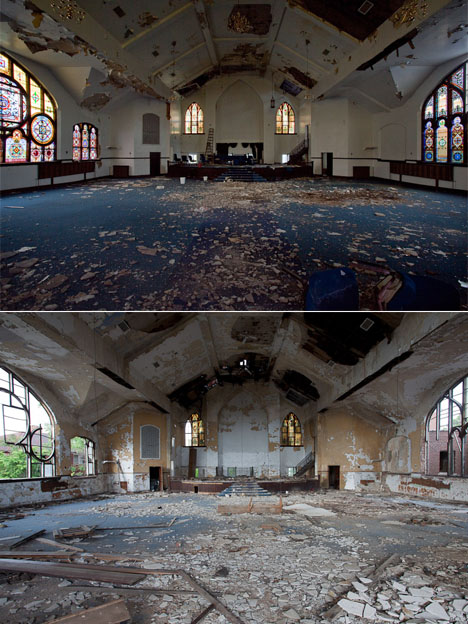 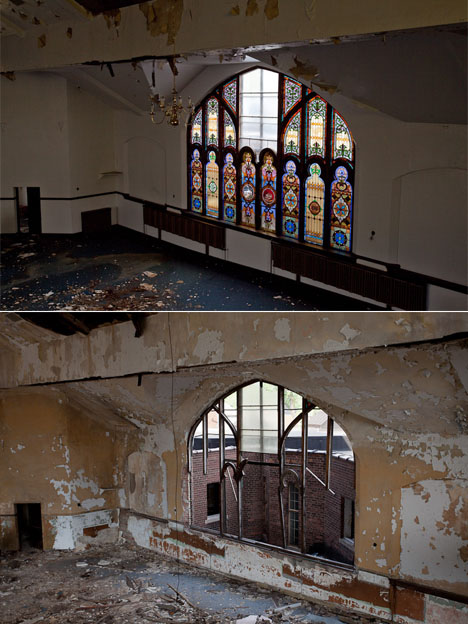 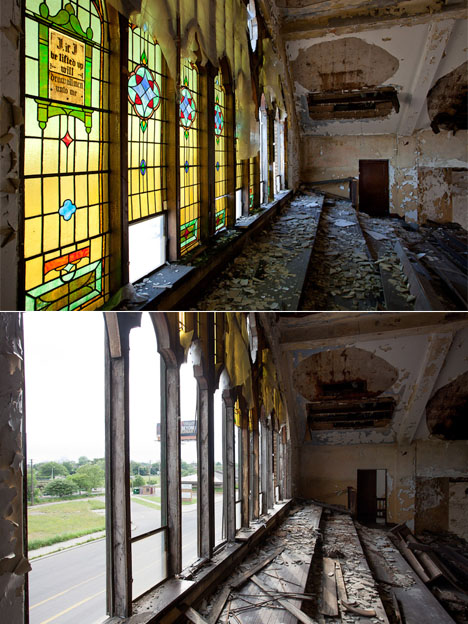 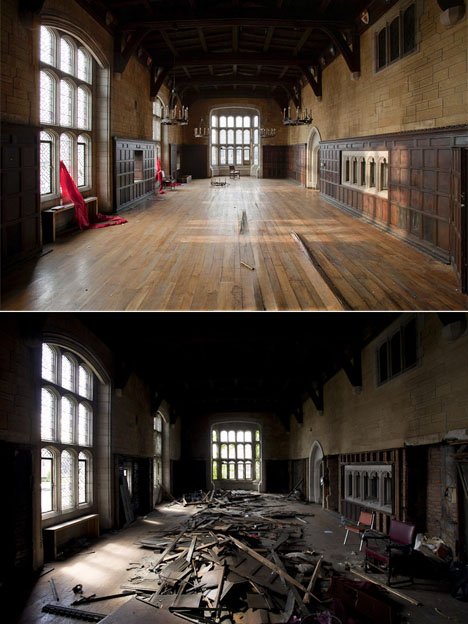 While the results are the same--decay--one is caused by neglect, the other by thievery (potentially motivated by preservation, we'll probably never know). I have to ask you, which do you think is worse?

Steve Jobs famously quoted Picasso as saying "Great artists steal." Hildebrand and other FAP-supported artists, it seems, were great enough to have their work stolen.

Stealing Detroit, One Bannister At a Time