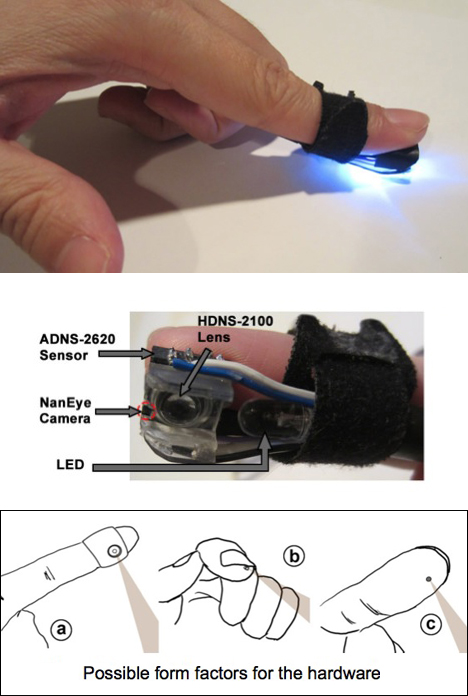 A couple of things distinguish it from a mere finger-mounted mouse: One, it contains a tiny camera that can distinguish different textures, enabling context-aware actions; for example, the device could be programmed to send different commands depending on what it was touching, i.e. swiping your cotton shirt answers your cell phone, touching your face triggers the voice-rec, et cetera. Two, as far as we can tell the user is meant to wear it constantly, like a ringer, providing a persistent means of both scanning and providing gesture-based input to the device of your choice. (As one example, Engadget points out that it could make up for Google Glasses' lack of an input device.)

As the team writes,

Recent years have seen the introduction of a significant number of new devices capable of touch input. While this modality has succeeded in bringing input to new niches and devices, its utility faces the fundamental limitation that the input area is confined to the range of the touch sensor. A variety of technologies have been proposed to allow touch input to be carried-out on surfaces which are not themselves capable of sensing touch, such as walls, tables, an arbitrary piece of paper or even on a user's own body.

...To overcome [other input devices'] inherent limitations, we propose finger instrumentation, where we invert the relationship between finger and sensing surface: with Magic Finger, we instrument the user's finger itself, rather than the surface it is touching. By making this simple change, users of Magic Finger can have virtually unlimited touch interactions with any surface, without the need for torso- worn or body-mounted cameras, or suffer problems of occluded sensors.

In the video below, the team demonstrates their projected real-world applications. (We don't know what the budget for this project was, but we can tell you they, um, didn't spend anything on actors' fees.)