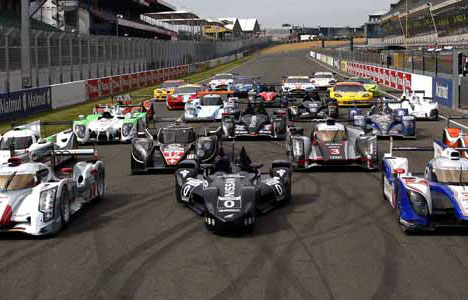 The Le Mans organizing body was likely very curious to see what Ben Bowlby's DeltaWing could do, as the design is a car of "halves": It has half of the drag, half of the weight and half of the power of a conventional design—which Bowlby projected would consume half the fuel, half the brakes and half the amount of tires. This was good enough to get Nissan interested, and they committed to providing the engine.

"As motor racing rulebooks have become tighter over time, racing cars look more and more similar and the technology used has had less and less relevance to road car development," said Andy Palmer, Nissan Motor Co.'s Executive Vice President, after sealing the partnership. "Nissan DeltaWing aims to change that and we were an obvious choice to become part of the project."

To the untrained eye the knock-out appeared pretty blatant, but as you heard in the video, the announcers attribute it to an unintended consequence of Bowlby's wing-less design: The DeltaWing, the announcers claim, is difficult for other drivers to see. Other media outlets, however, called the contact "reckless" and Nakajima later apologized.

As light as the contact appeared, it was disastrous for the DeltaWing team. As reported by Automobile,

Damage was so extensive that DeltaWing driver Satoshi Motoyama was unable to make it back to pit road (crew members can't work on the car outside the pits). Before the incident, the car was running strongly enough to have finished well against the most technically sophisticated prototypes of this era.

The DeltaWing team was out of the race. Bowlby looked on the bright side: "The car did what we had all hoped it would do," he said, post-race. "It ran at the pace the [Le Mans organizing body] had asked us to run. And believe me, there's a little bit of headroom: we can go quite a bit faster."

Undeterred, they returned to the U.S. and rebuilt the car. They subsequently gained approval to run it again, this time in the 1,000-mile Petit Le Mans race at Road Atlanta, where the DeltaWing made its American debut last weekend.This time they got the tragedy out of the way early, during a pre-race practice run last Wednesday. A Porsche clipped the DeltaWing at speed, and this is what happened:

Viewed at regular speed, the impact again looks pretty blatant, and you can see DeltaWing driver Gunnar Jeannette making a WTF, WTF gesture at the Porsche driver after the crash. Luckily, despite how terrifying the upside-down part looked in slow-motion, Jeannette was not injured.

Now the team had just two days and change to rebuild the car before the race on Saturday. Here, courtesy of a GoPro (which also recorded the in-car crash view), is a couple days' worth of ass-busting work compressed into two minutes:

By Saturday the car was ready, and the remaining obstacles were bureaucratic: Running in the "Unclassified" category, the DeltaWing was forced to start at the back of the pack. Furthermore, during the race, they lost laps on technicalities having nothing to do with the the team or car's performance; sanctioned cars are allowed to "unlap" themselves during safety-issue slowdowns, whereas the DeltaWing was afforded no such luxuries. Despite that, here's what they were able to pull off:

Fifth place, out of a field of 42, is nothing to scoff at. Absent the bureaucratic hurdles, it's not difficult to imagine the team placing in the top three.

"We've shown everyone in motorsport that the car is really strong and fast," said Lucas Ordonez, the other DeltaWing driver. "We're here with a new concept of half the weight, half the power and half the aerodynamic drag - but with pace that is very comparable to the [other] cars."

Prior to the first Le Mans race, some expressed scepticism that the DeltaWing would be competitive with a 1.6-liter engine that's half the size of what some competitors' powerplants. Bowlby was interviewed by Racecar Engineering and explained:

You have to have extraordinary performance but you also need to do it with the technology that the auto industry is trying to focus on. So DeltaWing was born out us asking ourselves how we could use one of these small engines to go just as fast and consequently use less fuel, fewer tyres and so on. Efficiency needed to be the fundamental overt element of the car. It's what I've done all my career; making my cars more efficient from a mass standpoint and from an aerodynamic standpoint than my rivals. DeltaWing was what I came up with as an answer to how to go just as fast on less.