NYC on Hurricane Lockdown, Part 2: Taping Windows is Probably a Waste of Time. Now We Need a Video Demonstrating Why 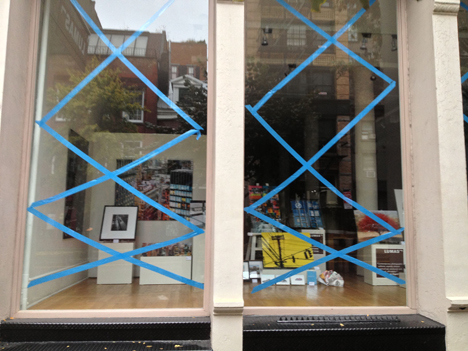 Heading over this morning to the high-end shopping strip of West Broadway, where every store seems to have huge windows, we see what's in the photo above. I have a hard time believing a few lousy strips of blue painter's tape can hold a window together. In fact meteorologist Chris Landsea, who is the Science and Operations Officer at the National Hurricane Center, writes "[taping windows] is a waste of effort, time, and tape. It offers little strength to the glass and NO protection against flying debris."

While I think whomever did the blue tape job was wasting their time, I think Landsea might be misguided—not in his stating of what tape won't do, but in his understanding of why people tape their windows. I'd always assumed people taped their windows—with sturdier duct or gaffer's tape, that is—in an effort to keep the glass itself from disintegrating into shard-like projectiles upon shattering. I never understood it to make the glass stronger or somehow serve as a protective net from flying debris impacting the glass.

That being said, I still suspect tape doesn't work at all; the paragraph above is my interpretation of what window-tapers think they're accomplishing.

So the question is, how did window-taping start? Clever marketing from 3M or a local retailer? Interestingly enough, the taping of windows was done by the Brits in World War II as part of ARP (Air Raid Precautions) measures during the German bombing Blitz. As you can see from the images below, the taping was rather more thorough than the half-assery pictured up top. 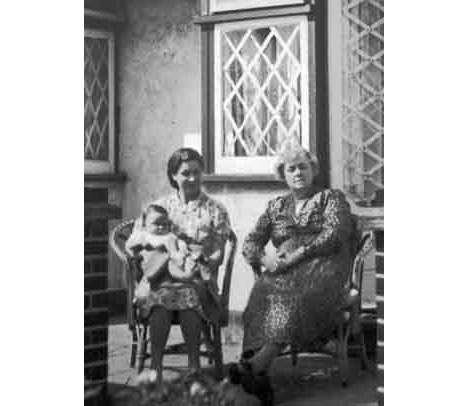 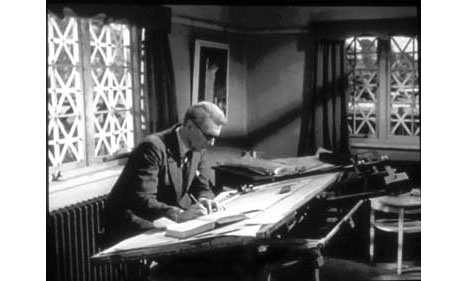 Explains a gent named Peter Johnson writing on a UK website about life in the 1900s,

[During the Blitz] each house was given some rolls of gummed brown sticky paper about 3 inches wide. These were for sticking to the inside of all the windows from corner to corner in a diagonal pattern to prevent shards of glass from flying into the rooms in a bomb blast.

What no one mentions, however, was whether this actually worked.To keep windows from completely shattering by using an adhesive, it seems a full-sized laminate would do a better job. Over on Crosby Street, the local All-Saints Spitalfields store has covered their windows (months ago, unrelated to the hurricane) with these promotional images adhered to the glass: 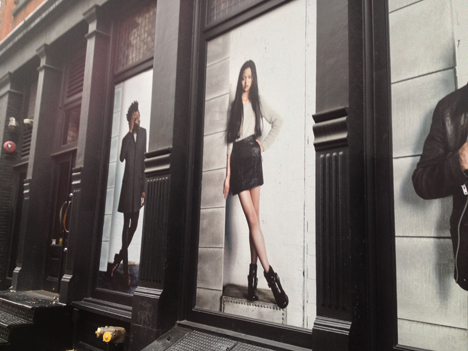 Assuming the film is sturdy, I'd think it would help keep the shattered pieces together, even if it won't stop the window from breaking. And of course, many modern windows are already constructed with layers of laminate for insulation purposes.

I think part of the reason people continue misguidedly taping their windows is because those against the practice do such a poor job of explaining why it's not effective. For example an organization called the Great Hurricane Blowout is running a "Go Tapeless" campaign, where they state:

[Get] families to go tapless this hurricane season! Taping your windows in preparation for a hurrican does nothing to keep your windows intact. In fact, the tape may create larger, potentially deadly shards of broken glass.

However, the organization doesn't list a single reason explaining why this is so. Nor does the following video, where a representative from the Federal Alliance for Safe Homes discusses, between minutes three and five, that taping is a waste of time:

You'll notice she states 70% of people still think taping windows is effective. If you really want to convince people otherwise, I think a single YouTube or MythBusters video illustrating the difference (or lack thereof) between taped and non-taped windows would do the trick.

The best solution is probably to cover fragile glass altogether. Balthazar is a popular French bistro on Spring Street that has chosen to remain (at press time) open for business. They're doing what hurricane survivors from the Gulf states already recommend, on online forums, is a good way to go: 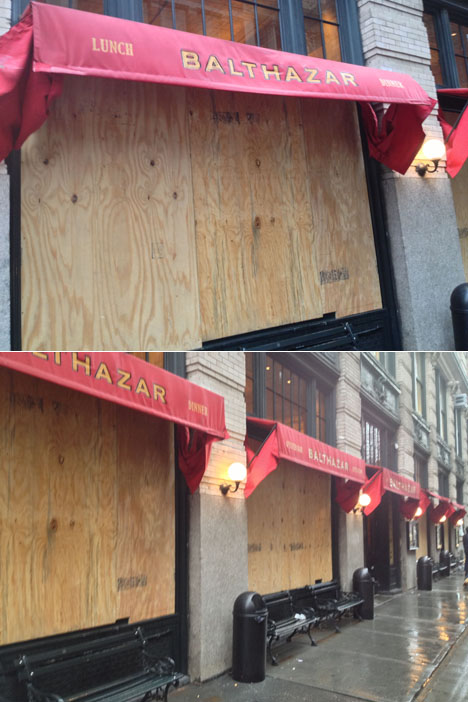 Staring at a sheet of CDX while drinking your café au lait isn't necessarily charming, but it's probably a good way not to get sued.