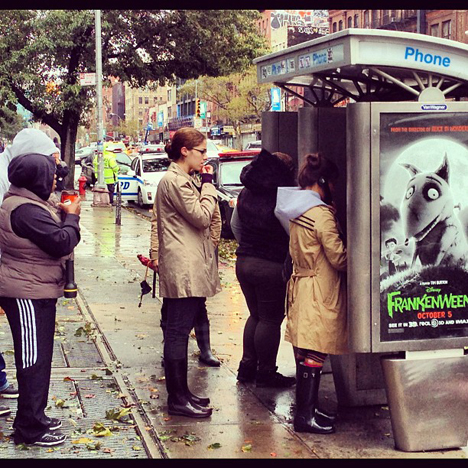 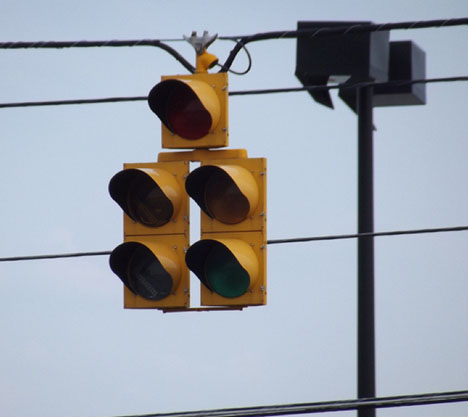 Mid-lower-Manhattan-blackout, I need to relocate my two dogs and I to somewhere with electricity and internet, so I can continue to earn a living. I didn't know who would and wouldn't have power and did not pre-plan a fallback location. But now I remember I've got a buddy staying at his boss' townhouse in the east 60s, within the powered zone. It's a longshot that they'll allow dogs, but he's the closest place I can walk to while towing two dogs, carrying my computer and lugging my own food & water.

But I won't walk up there unannounced; because I failed to work out contingencies in advance, I'd better ask before showing up. I can't call him, obviously, so I put rain gear on and head outside to make the 2.5-hour roundtrip.

What I see outside makes me change my mind about walking. The amount of damaged trees, huge branches in the street, collapsed awnings, and generally heavy things sitting in places they oughtn't, makes me think a long walk would be dumb. There are a lot of once-securely-mounted things on the average city block that can fall on you, and I don't want to be killed proving the law of gravity.

A second, more surprising thing I see that also makes me change my mind: there are tons of people outside—and taxis. It's not easy getting one, but ten minutes later I'm in a yellow Crown Vic headed uptown.

As we reach the 30s I see people on the sidewalk talking on cell phones, so I pull mine out and switch it on. Service! I call my buddy, and during our brief, choppy call, he apologetically tells me we can't be accommodated. Ah well. I have the cab turn around.

The most amazing thing I saw on that cab ride was this: No traffic lights were working below the 30s. And traffic, both pedestrian and vehicular, moved through those latter parts of the city flawlessly. Admittedly it wasn't a rush-hour level of traffic, but even still I'd have expected lots of near-misses, stymied pedestrians who couldn't cross, honking horns and curses. But there was none of that. My driver slowed at each intersection to look around, as did every other driver. Pedestrians watched cars going in the same direction as them, and crossed intersections when those cars crossed. We never sat still for more than a few seconds and it never seemed even remotely dangerous.

At just two major intersections we went through (23rd & 3rd and Delancey & Bowery) were there foot police directing traffic. Every other block worked flawlessly with no signals, just quick negotiating glances between drivers and pedestrians. I have more to say about this at the bottom of this entry.

Another thing that struck me was the amount of people, mostly tourist-looking, standing outside of closed subway stations and looking confused. They'd peer past the tape blocking the entrance, as if hoping to see something informative at the bottom of the stairs. I guess those without access to news would have no way of knowing the entire subway system had been shut off; I only knew because it had been mentioned in the radio broadcast. Hours later, I leave my apartment again, to use my last remaining battery life to call a friend in Jersey with a car. The radio broadcasts I heard have again not given me the info I want, which is if my friend's area has power. But it's worth a shot.

By this point getting a taxi is impossible. There are still lots of people outside and clusters of them are trying to hail already-full hacks. I start walking uptown, fruitlessly hoping I can minimize walking underneath stuff.

Then I again see something interesting: there are long queues of people lined up at the sparse collection of payphones in my neighborhood. Most have long since been ripped out, and it didn't even occur to me that any were left. Some of the lines stretch ten, twenty people deep so I keep walking.

I encounter two payphones with working dialtones and no one waiting to use them. I soon see why: the coin slots are jammed.

After waiting on shorter lines further north, I get my turn at two other payphones. Both need a dollar in coins to connect my technically long-distance call. Both take my money without connecting the call, and the coin return does nothing. I'm out of change, so I keep walking north.

By the time I reach Union Square, though, I see people talking on their cell phones. I'm getting a signal and make my call. My friend has power, working internet and a car, and an hour later she's picking us up, having easily navigated traffic-light-free lower Manhattan in the manner described above.

About that: After being relocated to an area where I could watch the evening news, I was pissed off to see an ABC reporter standing at 23rd & 3rd—and completely misrepresenting the situation. They had a camera trained on the scene, which the male reporter described as, and this is a direct quote, "total bedlam." In shrill tones he made it sound like people were nearly being hit and cars were nearly colliding. None of that was true; you could see, on camera, everything proceeding as I described earlier in this post. A traffic cop was guiding the chunkier flows of cars, and the reporter criticized him for not having a flashlight—when he was clearly wearing a yellow reflective overcoat that every set of headlights illuminated. I can't stand it when people on TV overstate how bad things are in an effort to induce viewer frenzy.

That was two days ago, on Tuesday. As of yesterday, NYC gridlock is back, as more motorists have become emboldened to venture out and the city has reintroduced bus service. But for that brief period on Tuesday, it was amazing to watch city traffic flow in a completely self-directed, guidance-free way.

Up Next: Suggestions for Disaster-Prep Objects