Karim Rashid sez: "Human beings touch an average of 600 objects a day." I'm guessing that number drops, and becomes much more focused, during emergency situations. Here are the two things I touched most during the recent blackout.

Surprise winner: The iPod Nano I never ordinarily use.

The Nano's built-in radio tuner was my only link to mass media, and as I live in a city well-covered by broadcast towers the reception was crystal clear. The device is tiny and unobtrusive, easy to clip on the lapel of a shirt. It only had a sliver of battery life left, yet lasted hours longer than I thought it would, because after you turn the screen off it uses such little juice.

The Nano will now be a go-to piece of kit for me, as soon as I get around its only drawback (proprietary charging method) by acquiring a battery-powered iDevice charger. I'd recommend it for anyone not requiring a powerful antenna.

Undoubtedly the object I touched the most during the blackout whether cooking, trying to take a pee, or confronting someone I thought was breaking into the darkened diner downstairs (turned out to be the diner owner, who offered me free bagels in gratitude). I can't say the model I have, the E2L Outdoorsman, is any better or worse than competing ones, as the only thing I have to compare it to is the relatively wan Mag-Lites I grew up with. The ergonomics of tactical LED flashlights are obviously superior, requiring just one hand, and the beam is almost absurdly bright for something so small. The metal clip is sturdy and makes it easy to keep the thing at hand at all times. 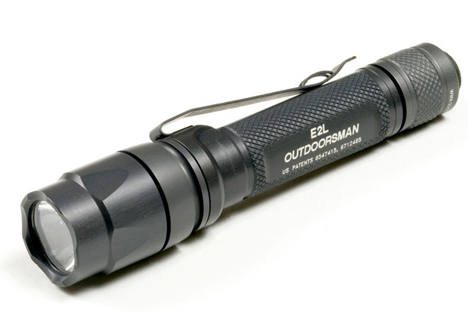 However, there are two central design flaws that I see with LED flashlights like this. 1) A lack of visual feedback on power levels, and 2) no well-designed way to attach extra batteries.

1) When this flashlight does run out on you, it's completely without warning. One second it's working, one second it's not. Old-school flashlights start to get dim, telling you it's time to switch batteries.

I realize this would add to the cost, but I'd consider it a perfect object if there was an indicator of exactly how much battery life was left. I'd settle for a sequence of LED dots, but I'd pay more for a counter that dumbed it down—the way new cars tell you you've got 72 miles left in the tank—by telling me how many more minutes I could leave the thing on for.

2) The CR2 batteries required by LED flashlights are not easy for me to find locally, so I stock up on Amazon. But I don't like that they sit in the back of some drawer. I wish the Surefire had some type of clip-on thing so I could always keep the extra batteries together with it, in case it runs out while I'm in the middle of doing something important. I'm guessing someone makes a holster that holds both the flashlights and extra batteries, but I'd prefer not to have a separate thing, I'd like to see it built into the flashlight itself.

Up Next: Your Suggestions for Disaster Prep Objects