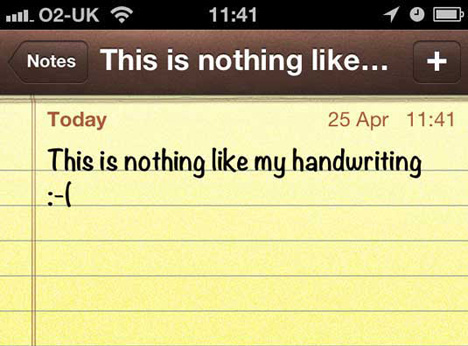 With any luck, design like this is on the way out.
[image via creative bloq]

With any luck, design like this is on the way out.
[image via creative bloq]

While Hurricane Sandy wreaked havoc on Monday, Apple experienced some tumult of its own in the form of an executive shake-up. It's significant in that the new order will influence the company's design aesthetic.

Here's what it boils down to:

Scott Forstall, the SVP in charge of iOS, was a big fan of skeuomorphism. That's the tacky design practice whereby you place visual elements from old media into new media, i.e., needlessly adding graphics of a spiral binding at the edge of the screen to make an app look like a physical notebook. As per his position at Apple, Forstall had the juice to have skeuomorphism integrated into the software of the products.

Jonathan Ive is reportedly not a fan of skeuomorphism, but as his domain was previously limited primarily to the physical design of Apple's products, there was little he could do about it.

Well, Forstall's now out, and Ive is further in. On Monday it was announced that Forstall's (probably forced) departure is scheduled for 2013, and Ive's domain will expand to include taking charge of Apple's Human Interface, i.e., UI and UX.

That's an awesome move on Apple's part. Yes, I'm biased; I think skeuomorphism sucks. It doesn't add anything to my experience to have the Notes app look like a legal pad, or to have the top of my Calendar app look like it's made out of desk-ledger leather. And the Address Book software is terrible; it's made to look like a book, yet doesn't work like one—there's no easy way to flip pages from the All Contacts view.

Unrelated to skeuomorphism, try adding a reminder in Calendar and setting an alarm to go off five minutes earlier than the event; it requires an absurd amount of mouseclicks to accomplish and you cannot just "tab" to the "minutes" field. There's no way this feature was designed by a designer.

Critics of the move who say that Ive's experience is limited to physical design, do not understand that industrial design is meant to encompass the user's experience in total, and wrongly assume that Ive is some kind of glorified draftsman. No, Ive taking Human Interface over can only be good for the company, and I believe we'll at last see Apple's software catching up to the hardware.

"This is a doubling down on integrating hardware and software design," industry analyst Patrick Moorhead told Computerworld. "There's now just one decision maker."