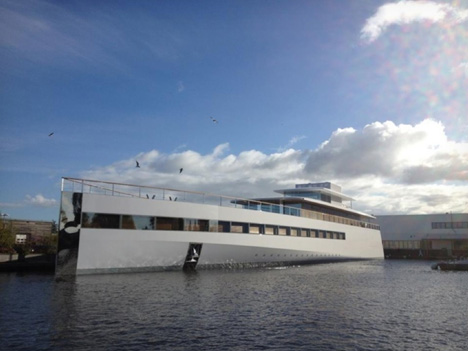 You may remember that earlier this year, Philippe Starck claimed to be working on a "revolutionary" project for Apple. That was later clarified, and it turned out Starck wasn't working for Apple, exactly: He was the designer tapped by Steve Jobs, before his death, to design Jobs' personal yacht (or at least, the interior). 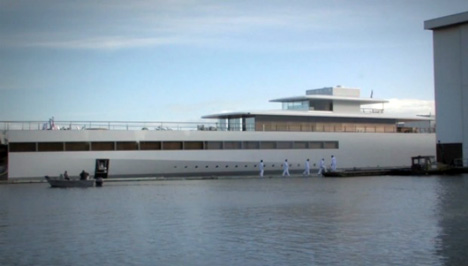 Well, said yacht—tragically completed one year after Jobs' death—was finally completed and launched on Sunday in Allsmeer, a Dutch city eight miles south of Amsterdam. Pictures of the interior are pretty scarce, but here's one that surprised me: 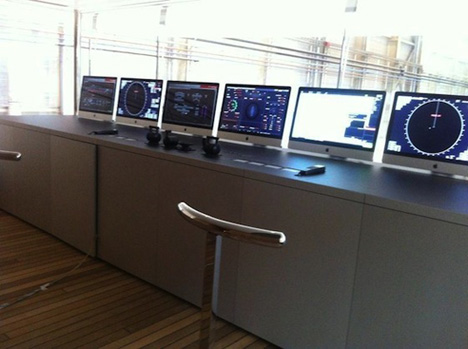 You think those are just for show, or do you reckon they pilot the thing by iMac?

In any case, Walter Isaacson's biography of Jobs seems to contain more details about the boat than we can see in the sparse photos:

[Jobs] showed me all of the models and architectural drawings. As expected, the planned yacht was sleek and minimalist. The teak decks were perfectly flat and unblemished by any accoutrements. As at an Apple store, the cabin windows were large panes, almost floor to ceiling, and the main living area was designed to have walls of glass that were forty feet long and ten feet high. He had gotten the chief engineer of the Apple stores to design a special glass that was able to provide structural support. By then the boat was under construction by the Dutch custom yacht builders Feadship, but Jobs was still fiddling with the design. "I know that it's possible I will die and leave Laurene with a half-built boat," he said. "But I have to keep going on it. If I don't, it's an admission that I'm about to die."