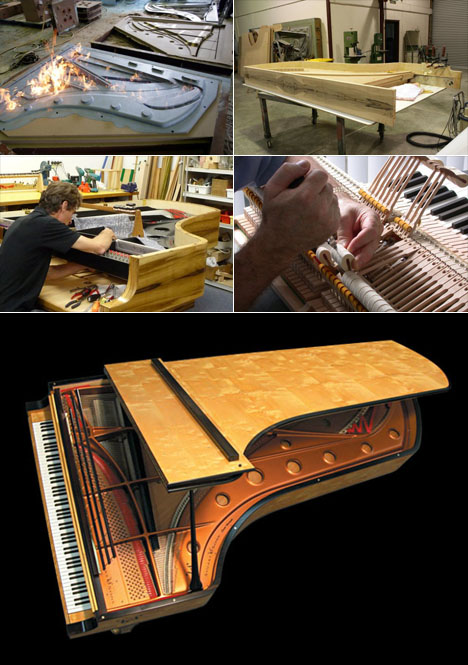 A subset of us creative-types develop otaku instincts towards specific objects. Some of you geek out over bikes, others collect and restore old typewriters, and I've got my inexplicable vintage sewing machine fetish. On the more refined side, Australia-based Wayne Stuart's object of fascination is the piano.

To us designers, particularly industrial designers, the appeal of a piano is obvious: It combines fine furniture making with clear-cut mechanical functions in a perfect blend of left- and right-brain activities. A piano is essentially a wood-and-metal machine that emits sonic art. Stuart wanted to push that art further, by doing something few would dare: Re-design one of the most popular musical objects in the world.

The resultant Stuart & Son piano, developed a little over a decade ago, features "14 extra keys, a fourth foot pedal, a slightly arching and longer soundboard and a new sound component that gives the piano enhanced dynamic range and clarity of tone." Let's have a look (and listen):

So how do actual pianists feel about it?According to the Sydney Morning Herald,CONCERT pianist Vicky Yang describes her first play of the bespoke acoustic piano as akin to love at first sight. "Like switching from fine food to delicacy," she enthuses. "There is no return once you have tasted heaven."

It's a "magnificent beast", says Yang. "Beautifully crafted, intelligently installed, with the strings and other hardware, grandiosely presented and sensitively resonant.

"The extra keys and fourth pedals act not only as twice the number of tools an Inspector Gadget could hope for, but its variations allow you to emulate any keyboard instrument you may desire—like the sound of an organ or the detail of a harpsichord or the clever talk of a fortepiano."

I'm an uncultured lout who admittedly doesn't know what any of those latter terms mean, but apparently they're good—Stuart's design has landed a spot in Australia's Greatest Inventions & Innovations, a recently-released book produced in conjunction with Sydney's Powerhouse Museum.

The nearly 200-page tome highlights Oz's best inventions, from black box flight recorders to cochlear implants to disposable syringes, and even Wi-Fi (though there's some grumbling in the international community about patent litigation on that last one). Those based in Sydney can catch some of the inventions at the Powerhouse, where they'll be on display as, believe it or not, part of an upcoming "Wallace & Gromit's World of Invention" exhibit.