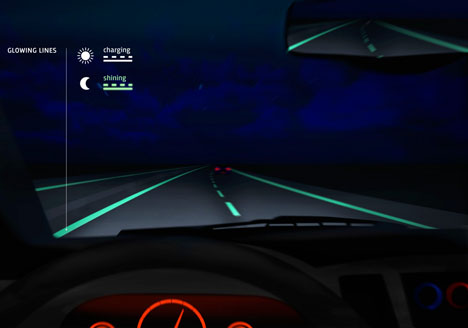 As the authorities struggled to get the power back on in Sandy-stricken areas of the northeastern United States last week, I couldn't help but think: Wouldn't it be nice if some of the infrastructure itself had its own power? Studio Roosegaarde, the Netherlands-based "international design laboratory," has a neat idea along these lines. Their Smart Highway project was awarded Best Future Concept at the Dutch Design Awards earlier this week.

The Smart Highway's brilliant central idea is that the road surface would have glow-in-the-dark elements embedded within it that would soak up sunlight during the day, allowing them to store up 10 hours' worth of illumination at night. There would also be graphic elements, like giant painted snowflakes that would appear in response to low temperatures, to indicate freezing conditions and warn drivers of slipperiness.

While the project won Best Future Concept, this isn't pie-in-the-sky; Studio founder Daan Roosegaarde has partnered up with a paint manufacturer that can actually produce the stuff, and with the help of Dutch infrastructure management group Heijmans, they'll begin applying it to a several-hundred-meter stretch of roadway in Brabant, Holland, sometime next year. "Heijmans and Roosegaarde," Daan told Wired UK, "are not going to wait any longer for innovations to find their way through the political system, but will start building this highway now."