As NYC Faces Gas Crunch, Brits Discover How to Make it Out of Thin Air 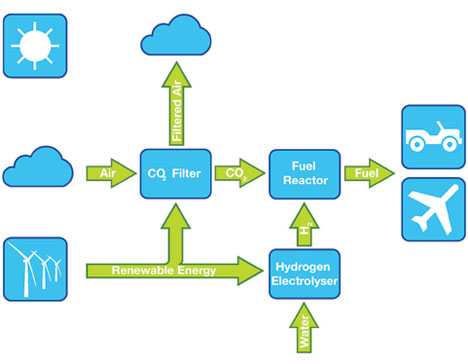 As of this weekend, the big story in the Tri-State Area is gas. Whether you're in Jersey or the five boroughs, petrol is scarce, lines are long and tempers are running short. So I was extra astonished to read, in the Telegraph, that a UK-based energy company has made a novel breakthrough: They can now create synthetic gasoline—out of air.

...Oil is basically made from carbon and hydrogen. Carbon is in the air in the form of carbon dioxide and hydrogen can be found in water.

In this manner, AFS was able to produce five liters of gasoline in less than three months. Obviously that's not quick enough by conventional standards, but the fact that it can be done at all is amazing. They're aiming to scale up to "a large plant, which could produce more than a tonne of petrol every day, within two years and a refinery size operation within the next 15 years."

While the synthetic fuel presumably gives off the same emissions as regular petrol when run through an engine, harvesting it is a carbon-neutral affair, as AFS uses renewable energy sources for the electricity required during the conversion. "But the best news," the company writes, "is that (once the capital investment is covered) the manufacture of sustainable, carbon-neutral AFS fuels is unrestricted by the price of raw materials, geo or local politics and avoids the land use or food availability issues that affect biofuels. Thus fuel production costs are low and predictable for the life of the plant."

You can learn more about the technology here.

As NYC Faces Gas Crunch, Brits Discover How to Make it Out of Thin Air