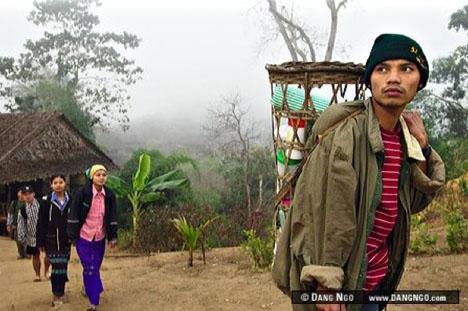 Photo by Dang Ngo, from his Lost Refugees on the Thai-Burma Border series

Here in NYC, Hurricane Sandy has just ended and spoiled a marathon, among other things. On Grand Street this morning, two joggers trotted past me speaking a Scandinavian language. On the next block, a trio of Japanese men in brightly-colored gear loped off in another direction. Following the last-minute cancellation of the New York Marathon, downtown Manhattan was awash on Sunday in exercising foreign runners who'd flown to New York for the event and were legging out their frustration.

Some runners headed out to volunteer in disaster-stricken Staten Island, which seems to have suffered Sandy's worst in the New York region. Others headed to Central Park for a pseudo-marathon and photo op at a mocked-up finish line. The Mayor lost some political capital for insisting the marathon go on, until his senior aides convinced him at the 11th hour that it ought not. But the Mayor might have turned this into a win-win had he taken a page from an underground Burmese organization called the Backpack Health Workers Team, and had groups of international runners bring supplies to the areas most in need.

Like many, Mayor Bloomberg has likely never heard of the BPHWT; the only reason I knew of it was because a friend of mine married a British doctor who's enlisted in a UK Special Forces unit. As her husband is both half-Burmese and highly trained in survival skills, before being deployed to Iraq, he was considering training as a Backpack Medic.

In Burma, hundreds of villagers displaced by regional conflict eke out an existence in the jungle, with no access to medical care. The vicious Burmese military policy was to destroy every medical facility they came across. In response to this, in the late '80s the Backpack Health Workers Team sprang up, comprised of brave, incredibly fit individuals--both male and female—that volunteer to strap on backpacks loaded with medical supplies. They literally run, from a secret cross-border location in Thailand, into free-fire zones of the Burmese jungle to locate villages and disperse medical care.

Beyond the uncomfortable 100-degrees-plus jungle climate, the job is insanely dangerous. Backpack Medics run the risk of stepping on landmines or running into Burmese military patrols. Some Medics arm themselves—"A gun is an essential piece of my equipment," one 29-year-old medic told the BBC—but there's still no guarantee they'll survive. "[The] Backpack Health Worker Team has lost nine medics and one birth attendant to gunfire or landmines in the last ten years," said an article on the Physicians for Human Rights website. "We must ensure that they will lose no more." 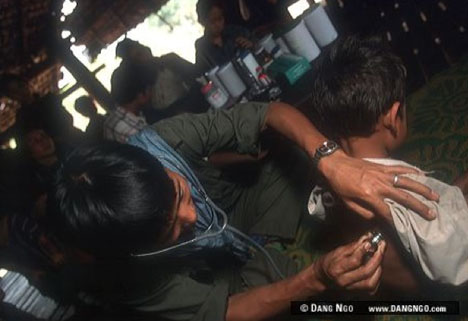 While the Burmese military was officially dissolved last year, that's an on-paper only reality, and they still wield tremendous influence in the lawless jungle. The BPHWT wiill continue to operate for the foreseeable future. You can read more about the organization's history and accomplishments here.