Ergologistics' Powered Handtruck Does the Heavy Lifting For You 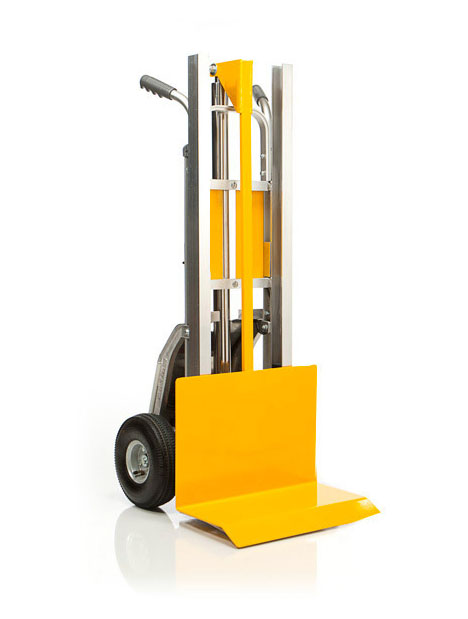 In New York City at least, UPS guys are like firemen: they're always young and in good shape. I wonder if we never see old UPS delivery guys because they get promoted to desk jobs, or because their backs eventually give out from the constant schlepping of heavy packages.

A Fargo, North Dakota-based company called Ergologistics has developed an electric handtruck designed to alleviate all of that bending and hoisting. Despite the lame name (it's called the Lift'n Buddy), it recently won a 2012 Edison Award, taking top prize, Gold, in the Tools category of the Industrial Design entries. Check out what it does in the video below. (Two warnings: 1) Turn your sound down, annoying soundtrack ahead, and 2) you don't have to sit through the whole 4:38, the first 90 seconds will give you the gist.)

The fully made-in-the-U.S.A. device is targeted at warehouses, distribution centers, supermarkets, manufacturing facilities and, of course, deliverypersons. Show the YouTube to your local UPS guy next time he shows up at the office, and he'll be wishing someone would deliver one to his door.

Ergologistics will be featuring the Lift'N Buddy at next month's 18th Annual National Ergonomics Conference and Exposition in Vegas. They also run a blog dedicated to workplace safety that you can check out here.

Ergologistics' Powered Handtruck Does the Heavy Lifting For You