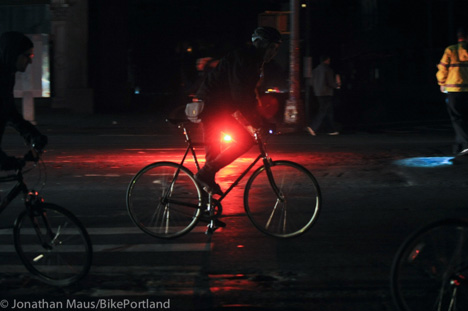 Hurricane Sandy was unimaginable in almost every way, beyond the scope of half a weekend's worth of preparedness, and New York City is still dusting itself off from the storm even as another system dusts the city with a fresh coat of miserable weather. As the major media duly noted during the days following the storm, the hurricane made an emphatic case for alternative transportation, but I'm surprised that no one has mentioned the fact that New York City was supposed to get a shiny new fleet of public bikes by this past summer, only to see the scheduled launch pushed back to fall and now March 2013. An August press release cites technical issues as the culprit (Streetsblog posted additional clarification from Mayor Bloomberg):NYCBS continues work to conclude manufacture and testing of the high-performance software necessary to operate the new system, which is being tailored for New York City. The system uses new solar power arrays and circuit boards, and engineers will continue to thoroughly test data communications, power management and payment systems to ensure overall system performance. Following the March launch, work will continue to expand the system to 10,000 bikes, covering parts of Manhattan and from Long Island City to parts of Brooklyn.

Those initial 7,000 bikes would certainly have been put to good use last week—assuming, of course, that the technology would make it through the storm (or better yet, the system could release all the bikes in case of catastrophe). I'd bet good money that any bikeshare availability at all would have been an unmatched opportunity for goodwill and good press, and its a shame that we may never know the hypothetical social impact of public bicycles in a time of crisis (knock on wood). 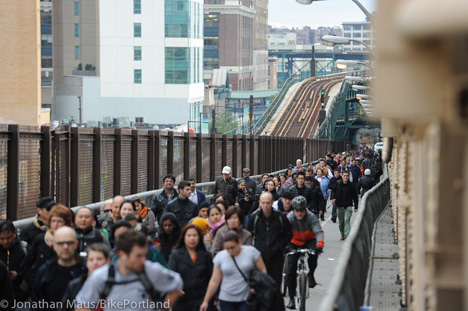 Indeed, the semi-anticipated lack of public transit sparked a new (or perhaps inevitable) interest cycling like a candle in a blackout: the extended service interruption left a void that was physically flooded with water and metaphorically filled with cyclists. In fact, on my commute home yesterday, another diehard struck up a conversation as we passed newbies in a broad bike lane, wondering aloud if there seemed to be more cyclists out lately. We agreed that the perceived uptick—bike lanes below 14th St seemed to be almost continuously in use over the past week—was a sure sign that many unsung New Yorkers preferred pedal-power to other less reliable (and only nominally more comfortable) modes of transportation.

As for the crisis itself, web-vid whiz Casey Neistat saw fit to venture into the dark heart of the storm on two wheels (he's a known advocate of the impractical daredevil activity known as riding a bike). Fastco Create has provided more background information on the much-circulated video (following the original Gizmodo post), as well as an update on Neistat's efforts since then:Neistat is a competitive endurance athlete and his younger brother, Dan, is a U.S. Air Force C-17 pilot, [so] the two had inclement weather gear and other equipment ready to go.

"We were donning the most appropriate safety gear we could possibly pull together, and we both have training," Neistat says of the dangerous excursion he took with his brother, who helped film the video. "But at the same time, we were kind of like, 'Fuck it, we're here: Let's make sure we capture things that otherwise might go unseen.'"

If Neistat's stunt is easily deemed an exception as opposed to the rule, Jonathan Maus of Bikeportland.org (stranded in NYC during Sandy) was just as quick to capture the subsequent mini-boom over the course of a few photo essays, from a first look at foot traffic on the Queensboro Bridge to Midtown to serial portraits of riders as they descended the Williamsburg Bridge, as well as some nice bikes-in-a-blackout shots. Likewise, Streetsblog documented newly-minted cyclists (and stalwart pedestrians alike) crossing the previously underrated Queensboro Bridge. (I speak from personal experience: I took the QB at least a couple times a week for most of the spring and summer and typically saw only about two dozen other commuters during any given rush hour.)

For my part, I set out to catch up with a few of my favorite local cycling concerns over the weekend: while Outlier barely missed a beat at their unscathed Williamsburg headquarters (at least one employee was back in the office by Tuesday), Red Hook's Gage+Desoto didn't fare nearly so well—the street-level storefront fell victim to the devastating surge that ravaged the waterfront community. 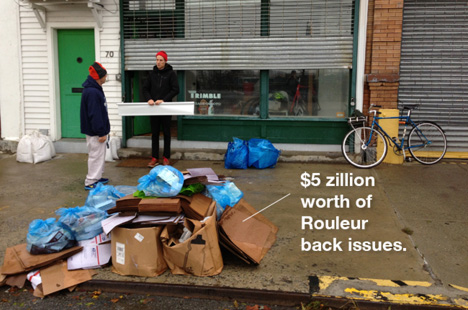 I visited the former during a busier-than-usual weekly Open Studio, when Abe reported that they'd generously donated a trove of their coveted winter gear to neighbor Brooklyn Kitchen's Rockaway relief efforts as friends turned up to socialize. The mood at G+D's Red Hook Office, on the other hand, was markedly more subdued the following afternoon, when they hosted a hurricane relief sale, even as well-wishers came by to offer condolences and support. Mike had lost substantial inventory to the waist-high inundation, and even though his studiomate Dave Trimble's enviable bike collection had mostly been spared, the two discussed next steps as the water-damaged space would require full-scale renovation. UPDATE: Pre-order G+D's "Restore Red Hook" jersey by December 1st, all proceeds go to relief efforts!

(Also worth mentioning: as with countless other local businesses, bike shops like Bicycle Habitat and Affinity Cycles have also organized grassroots relief efforts in the form of group delivery rides out to the Rockaways.) 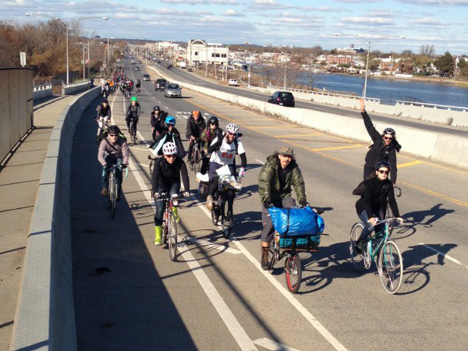 Unfortunately, the effulgent trend seems to have burned bright and fast—unlike some of the cyclists themselves, who lacked proper lights and passing-lane etiquette—as the MTA's commendable efforts have reassimilated straphangers and the ensuing cold snap will surely extinguish the newly-kindled passion of many a would-be everyday rider.

Today's nor'easter is likely to stop the momentum dead in its tracks: contrary to the crowded lanes over the past two days, I noticed only an average-ish number of bike commuters on the ride in this morning (no precipitation at 9:30AM), but seeing as many of last week's converts lacked even basic accoutrements as they exhumed old MTBs from basements, I imagine we'll be few and far between for what is shaping up to be an arduous ride home. I, for one, have every intention of braving the flurries and forecasted 50-mph winds... because we all know that cycling is an impractical daredevil activity for crazy folks. 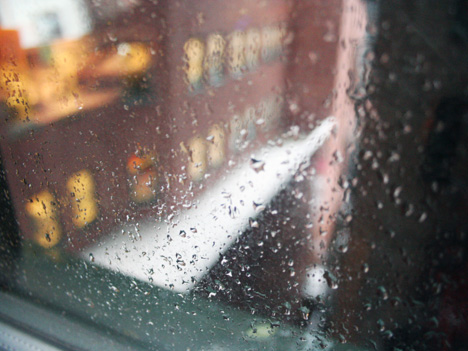 Last but not least, check out our list of ways to help.