We offered a few glimpses of the YUNG HO CHANG + FCJZ: MATERIAL-ISM, currently on view at the Ullens Center for Contemporary Art, in our Best of Beijing Design Week photo gallery, but unfortunately it was a bit too dusty during the press preview to properly revel in what is easily one of the most interesting exhibition designs that I've seen lately. Of course, this should come as no surprise given the content of the exhibition, a retrospective of the title architect and his studio, Feichang Jianzhu (FCJZ):Spanning the last 30 years, YUNG HO CHANG + FCJZ: MATERIAL-ISM explores FCJZ's experiments in architecture, design, planning and art together with a detailed study into the different aspects of Yung Ho Chang's practice, such as inhabitation, construction methods, urbanism, tradition, perception, and culture. Through these works, the exhibition not only considers the buildings people inhabit and the cities they constitute but also the importance of design in everyday urban life and the specific predicament of people, in the context of the last three decades of unprecedented growth in China. 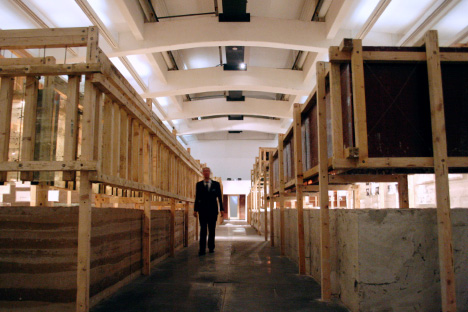 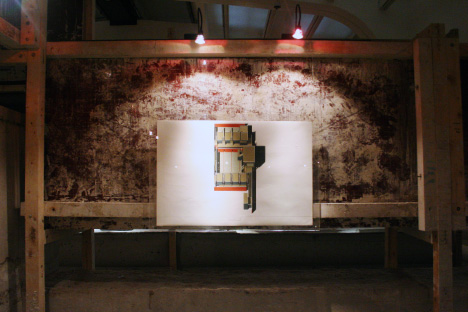 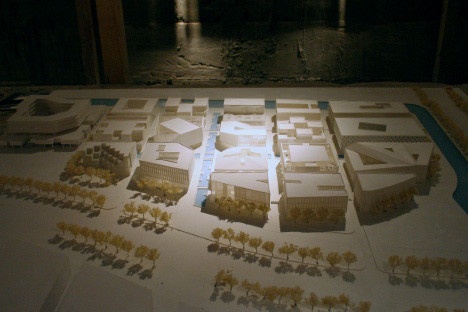 UCCA Director Philip Tinari praised Chang's "witty, thoughtful and universal design solutions inspired by distinctly Chinese problems and concepts," noting that he is "considered the father of contemporary Chinese architecture." He was among the first to leave the mainland to study in the States (Berkeley '84), where he lived and worked for over a decade before returning to his hometown Beijing in 1992.Known as both the first architect to set up an independent atelier in China and the first Chinese national to head a major department of architecture in an international university—having served as dean of architecture at MIT 2003–2009—Chang has inspired a wide range of followers and mentored a new generation of talent. 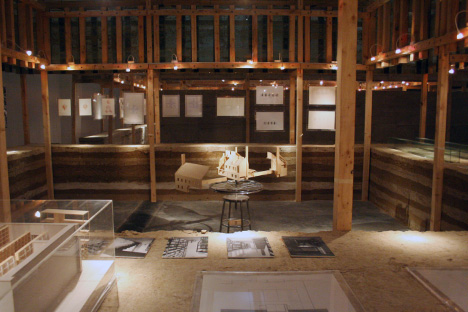 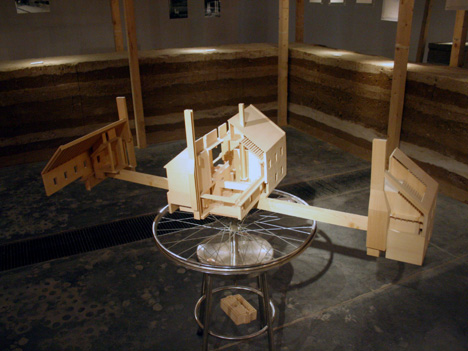 As he recently related in Time Out Beijing, Chang fondly recalled the traditional courtyard houses hutong of his youth... even as he witnessed the radical reinvention of the ancient capital over the course of two decades, as upwards of 88% of the iconic alleyways were bulldozed (according to UNESCO) in favor of the soulless highrises that dominate Beijing's cityscape today. 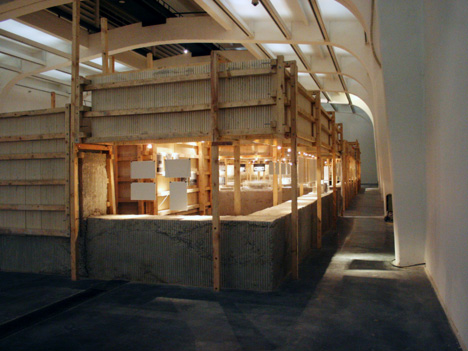 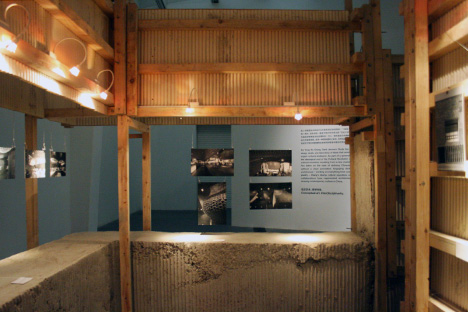 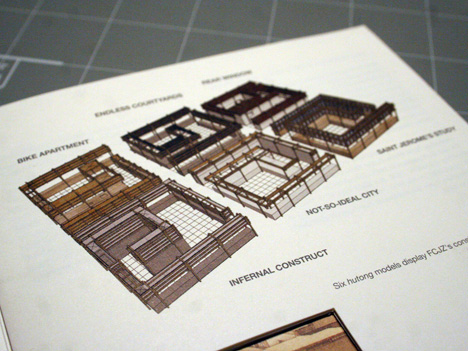 Hence, the transformation of "UCCA's Great Hall into six courtyard-like modules inspired by the 'hutong,' the traditional Chinese neighborhood network of narrow alleys between tile-roofed courtyard houses." Thus, each of the six sections focuses on a specific theme within Chang's oeuvre:BIKE APARTMENT - inhabitation as lifestyle Taking its title from Chang's whimsical 1986 design for a home inhabited by a single cyclist in Berkeley, this section looks at how architecture creates spaces for inhabitation and how design can reckon with its subsequent impact on the inhabitant's lifestyle.

III. NOT SO IDEAL CITY - the urban condition In questioning faith in architectural iconography and as an active response to the contradictory and ad hoc planning that characterises so many Chinese cities nowadays, FCJZ pioneered an approach called "micro-urbanism," where buildings functioned as fully integrated living spaces in a city and environment rather than free-standing structures. 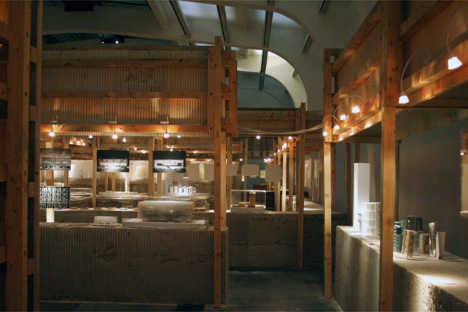 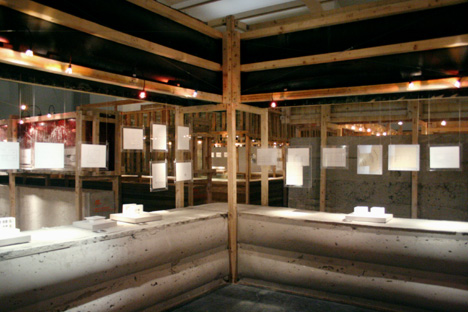 IV. ENDLESS COURTYARD - space and tradition FCJZ explores whether there is such a thing as inherently Chinese space and suggests that if so, it is related to the notion of semi-outdoor forms such as the corridor and the pavilion.

V. REAR WINDOW - architecture as perception Named after Hitchcock's 1954 film, this section takes the film's play on the relationship between spectator and screen or in this case, built structures and inhabitant's perceptions. Through exploring sight lines and vistas, FCJZ has argued that the building is in fact the eye of the beholder.

VI. SAINT JEROME'S STUDY - crossovers into art and culture Referencing the early Christian scholar who was celebrated for his significant works spanning a great variety of subjects, this section explores Chang and FCJZ's compelling experiments in fields as diverse as fashion, theatre, and literature. 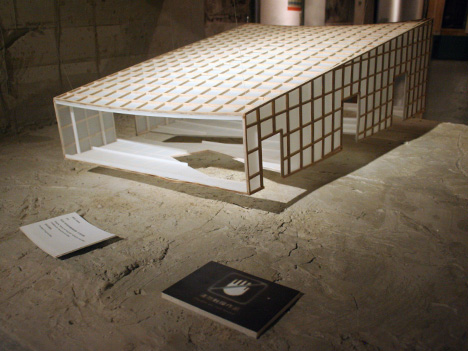 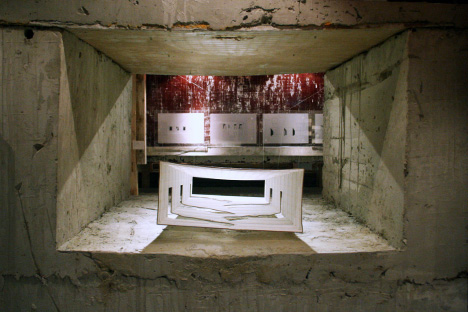 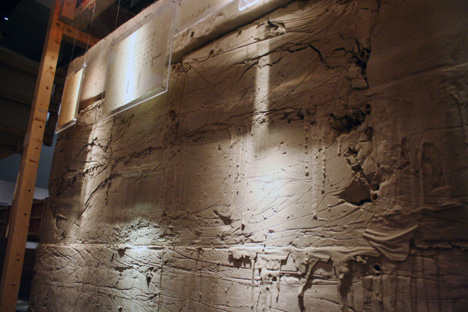 Designboom nicely captures the installation process: the molds for each of the concrete blocks are suspended above them to leave a horizontal negative space in which the models, drawings and ephemera are displayed. 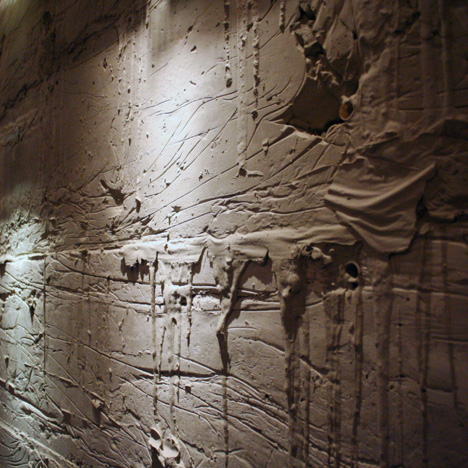 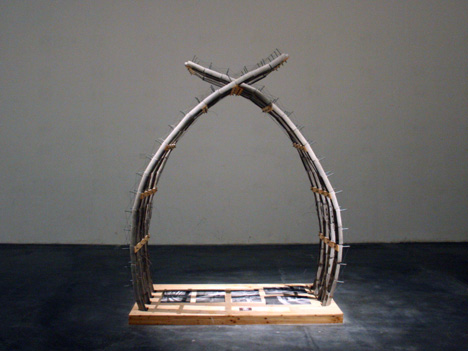 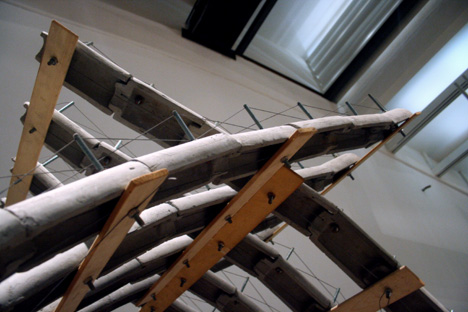 The exhibition also included a handful of experimental works, include the roofing tile structure above ("Wa Arch") and the vaguely dollhouse-like models-in-a-box, below. 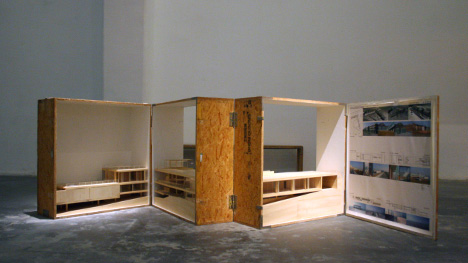 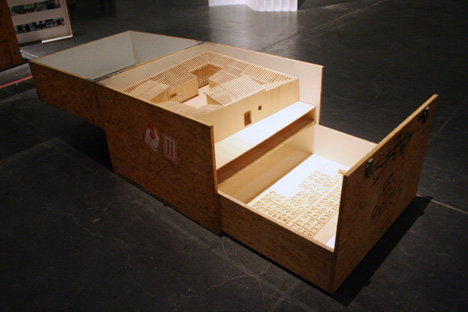 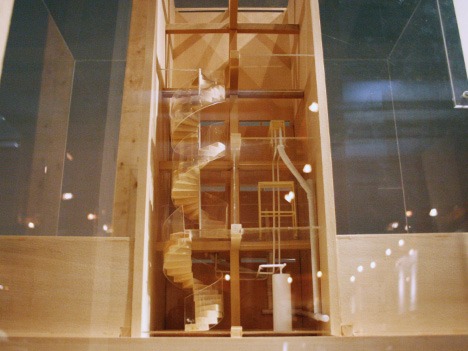 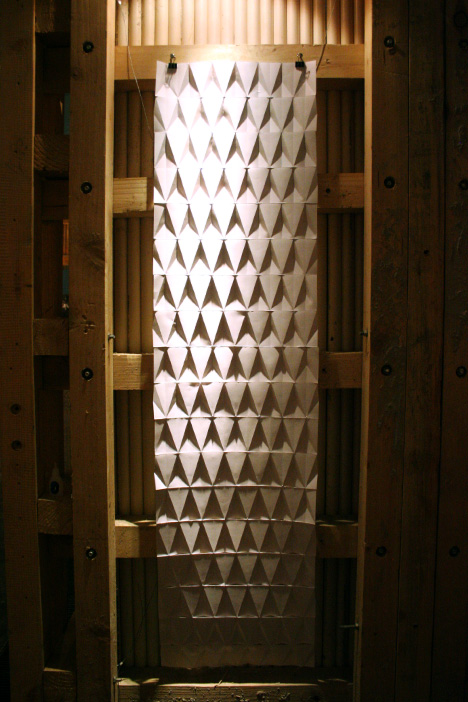 Additional installation views are available at the UCCA website, but you'll have to make the trip to Beijing's 798 Arts District to see the pieces themselves—the exhibition also includes two short films (old school kung-fu fights (!) staged in some of Chang's extant spaces). 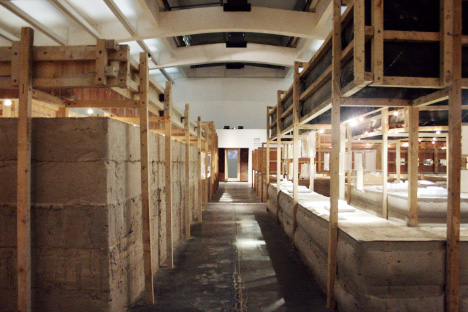