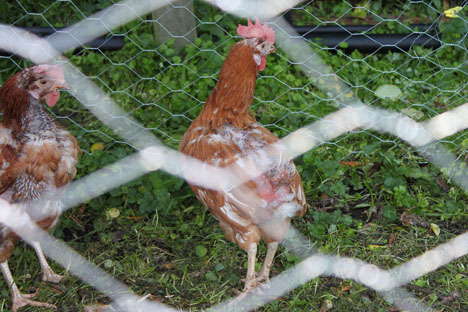 It's pretty brutal for older female actors in Hollywood, who seem to have a de facto expiration date stamped on them; beyond a certain age there are simply no good roles that Meryl Streep hasn't already scooped up.

Well, it's even worse for chickens. Stacey Kelly is a fourth-year industrial design student at New Zealand's Massey U., and is attempting to address the problem of "spent hens" with design.

A spent hen is a chicken beyond her egg-laying prime for use in commercial situations. What is the fate of a spent hen? The carcass and trimmings of the hen may be mashed up to make MRM (mechanically reclaimed meat), this is used in food products such as hot dogs although it is becoming less common. Alternative methods include suffocation or gassing to become animal feed ingredients, burning (sometimes alive) or force moulting. Force moulting is complete withdrawal from food and sometimes water - this stimulates the hen to lose her feathers but reinvigorates her egg production.

Kelly has discovered there are organizations, both in New Zealand and around the world, that re-home spent hens in a humane way. Some of the hens will then naturally produce eggs for an additional eight years. So for her final year project at Massey, she's focusing on a coop specifically for spent hens—something like a chicken physical rehabilitation center and retirement home. 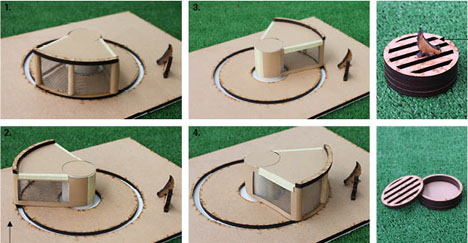 Her research led her to identify the key factor dissuading people from bothering to take on chickens: property damage. Like all poop, chicken poop can be disgusting and destructive if allowed to run rampant; but managed correctly it can be transformed into helpful fertilizer. To that end she designed the Nest Urban Hen House, where chickens can live healthily even in a city environment, provided they have access to a small patch of grass.

The chickens are housed in a pie-slice-shaped coop that periodically rotates around a patch of grass, keeping it fresher than if they were constantly sitting on the same plot. A deep litter floor is filled with wood shavings, so when the chickens shit the place up, their manure mixes with the shavings and creates useful fertilizer; she estimates the litter floor can go six months between changings, reducing maintenance. "The product and system should allow households to be away from their property for a number of days without jeopardizing the welfare of the hens," writes Kenny. 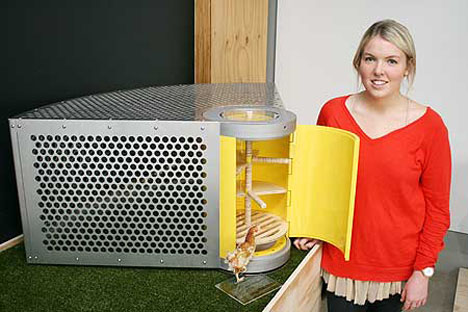 "Ideally," says an article on Massey University's website, "Ms. Kenny would like to work with a hen rescue agency to relocate commercially farmed hens, and then be able to provide everything from feed to vaccination supplies with a 'one-stop' hen house that should appeal to city dwellers."