Must-See Video: Finally, an Everyday Use for Optical Camouflage Tech 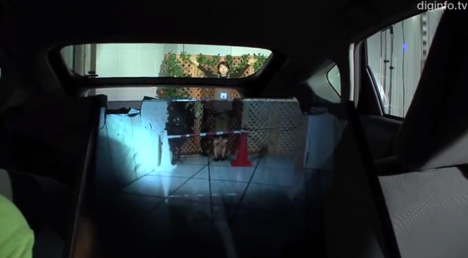 As if we haven't seen enough "Holy Crap!"-worthy stuff from Japan lately, today's second tip from our forums was too good to pass up: a Keio University research team led by Professor Masahiko Inami have adapted optical camouflage technology to "make the backseat [of a passenger vehicle] look transparent from the driver's viewpoint."The main feature of our system is, it makes things look as if you can really see through them, rather than giving an indirect view of what's behind. For example, with a system that shows things on a monitor, you can understand your car's position and where any obstacles are. But the point about our system is, it gives a sense of depth, by making things appear where they actually should be when you look back. 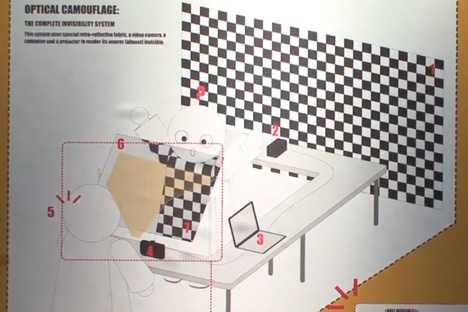 That's right, the verysame technology that's being developed for a real-life version of sci-fi/fantasy trope of an invisibility cloak or cloaking device—for a rather more mundane interior application: as a sort of full-size rear-view mirror for auto interiors. And if the actual physics of the technology is surprisingly straightforward—"video from the rear cameras is projected onto the backseat using a half-mirror—it's more than just a glorified augmented reality periscope:The screen is made of a special material called a recursive reflector. Optically, it has an interesting characteristic because it reflects light back in the direction of incidence. When we thought of applying it to automobiles, the advantage was, it gives a clear image in daylight, rather than in a dark place like this. 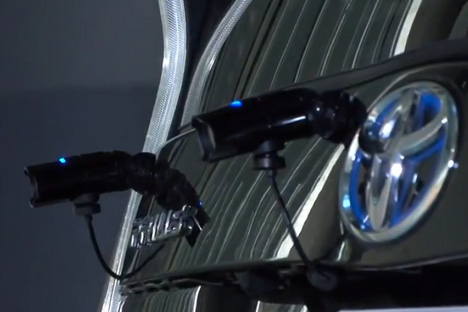 I was especially interested to learn that they're looking to develop the technology for an entire auto interior, affording a full 360° of reverse-cloaking transparency, a sort of virtual X-Ray vision that will do away with blind spots once and for all. "Currently, the system shows one point clearly. But from now on, we'd like to keep increasing the number of viewpoints. We plan to enable the system to be easily used by anyone."

Inami and his team optimistically estimate that it's a mere five years away from commercial availability. But not everyone is so enthusiastic about it: in response to wallflower's original post, Lmo writes,Another "safety feature" crutch for people that really shouldn't be behind the wheel of an automobile. If you think about it, all that is needed is driver awareness. An acronym is taught to commercial vehicle student drivers: G.O.A.L Get Out And Look

Know what's around you before you get into the vehicle. No optical camo required.

Via Diginfo; hat-tip to wallflower

Must-See Video: Finally, an Everyday Use for Optical Camouflage Tech